Top Stories
Cremeria Toscana: New Space, Same Authentic Gelato
What to Bear in Mind for English-Speakers Traveling...
The Complete Travel Guide to Visiting Puno, Peru
Video: CNN Reports on Chinese COVID-19 Vaccine Trial...
Salchipapa: A Peruvian Street Food Staple
Travel Updates: Coronavirus (COVID-19) Outbreak in Peru
The 3 Types of Andean Meat You Must...
Kuelap: What You Should Know Before Visiting the...
Machu Picchu Reopening Makes It the Second Most...
Chinocharapa: A Peruvian Mix of Asian and Amazonian...
Home The latest news about Peru Cabo Blanco is Hemingway’s Autumn
The latest news about Peru 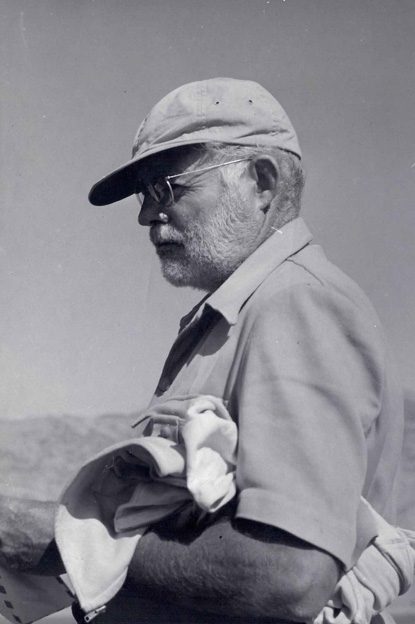 In May of 1956, Ernest Hemingway spent 36 happy days in Cabo Blanco, Peru. This is the story behind a classic photo of the literary great while he was in Peru

The story behind the photo

Peru was the only country in South America that Ernest Hemingway visited. And even though he visited Peru, he didn’t go to the capital of Lima or even to Cusco. Instead he came straight to the wild coast of the Pacific, to the northern tip, far away from the throb of the metropolises and the blase of the American cultural circles.

He liked being so close to the sea. When you’re at the ocean, you can not lie, he said. Cabo Blanco, the white cape in the middle of nowhere between the sea and the desert, is Hemingway’s land, a land where life and emptiness are contiguous, where luck and mischief mingle, and you have to look closely to keep them apart. It was May in Cabo Blanco and yet the man realized that autumn was slowly arriving.

When this photo was taken, Ernest Hemingway, the bull and lion, was getting more and more to the limits of his strength. There was a tuft of hair to hide his ever-growing bald head. “You’re tired, old friend,” he said. “You are tired inside.”

He wasn’t feeling well, he was realizing that the hourglass of his had life trickled down incessantly. In September 1955 he had his testament written in close handwriting, in blue ink, on both sides on a piece of paper in Finca Vigía . He realized that he was starting to go downhill. He was growing more and more tired, drained, he felt his powers dwindling. In the body, which was approaching the 60, of course, but also in the head.

It was hard for him to concentrate, his memory snorted like a diesel engine that came of age. His kneecap was made of aluminum since Fossalta, he had survived fractures, hunting accidents, car crashes and plane crashes and four nagging wives, but at this moment he was tired of life.

But he didn’t want to die. He wanted to be immortal, as he was in the Veneto, on the front, where the enemy mortars and grenades could not harm him either. The glory and all the other shit, they do not care. He didn’t worry about that. As far as posterity is concerned, I have only one goal in mind: to write truthfully. Posterity can take care of itself or lick my ass.

Here in Cabo Blanco, he wanted to show it all again. The friends, his wife, Gregorio, Elicio, the fishermen, the fish – but above all himself. He reared up. He was fighting. He wanted to be strong and strong again, conquer the monster, go out as victors. That’s what he wanted, here in Cabo Blanco, where you can catch the black marlin, the king of the sea, in the cold Humboldt Current. At least when you are young and the strength is enough and if a little luck comes to it.

Do you want to explore more in-depth into the life of Ernest Hemingway, including the times that he spent in Peru? Then check out Hemingway’s World, where I write about his life. I’ve spent decades researching his life and following in his footsteps around the world.

This article was previously published on Hemingway’s World

Marcahuamachuco: The New Machu Picchu of...

Sechín: A Valley of Warriors in...