Home Culture Come Drink Chicha and Dance with Me: One of Many Festivals to Celebrate Indigenous Traditions in the Sacred Valley
Culture

Come Drink Chicha and Dance with Me: One of Many Festivals to Celebrate Indigenous Traditions in the Sacred Valley 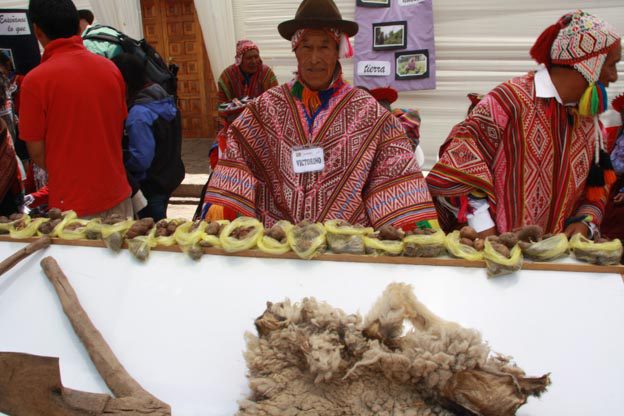 One of the things I love most about living in this small Andean town is that it seems that there is always a festival happening. Residents of the area are clearly proud of their traditions and heritage. They seem to take every possible chance to celebrate. Here are the highlights from one of these events.

Seven days a week, nearly every day of the year, you will find Pisac’s central plaza usually filled with dozens, if not hundreds of artesian vendors, tourist vans and buses, along with droves of wandering tourists who usually have no more than an hour to spend to buy before boarding their buses and moving on the their next step along along the route to/from Machu Picchu. But when there’s a festival, things are much different. And in my opinion, these are the most magical times to be living in the Andes.

Celebrating traditions that are slowly being lost

It was a celebration held by the Peruvian government to promote a newly established welfare program that at the time was still in its pilot phase, which gives assistance to those over the age of 65 who are living in extreme poverty. But the reason for the event isn’t what interested me; rather, I was drawn inwards by the many people in traditional dress who were so passionately celebrating their traditional culture. The vast majority of those present had come from various villages in the mountains above the Sacred Valley.

Words from elders about their culture and what is important to them.

Victorino, from the community of Chahuaytire, displayed a few varieties of potatoes that are grown in his community. It is said that there are over 1,200 varieties in the potato park alone. When the MC for the event approached him with a microphone and asked him about the potatoes pictured here, he took a second-long glance at each bag and named the variety.

Despite my best efforts, I could not tell much of a difference from any of the types of potatoes pictured here. After taking the photograph and speaking with him for a few minutes, he invited me to visit him at his home; something I will be taking him up on in the near future.

Scattered around the plaza were human-height sandwichboard signs, displaying photographs of various elders who live above in the mountains. Along with each photo was a quotation.

“My chicha is great, and it sits well in the stomach, because I pick good ingredients, and I let them ferment for long enough. I’ve raised by three daughters by only selling chicha. But now I can’t make chicha anymore, I’m going blind, but my daughter and my niece know how to make it, and now they go to the plaza and sell it, bringing money into our home”.

A quote from another man read

“Before, when we went to harvest corn, we sang. The leader sang first and the rest followed along. But this has already been forgotten, the children don’t know our stories anymore, nor our customs. Now they take the corn straight from the fields to their cars. They don’t follow the ceremony for harvesting our corn, and it pains me that our customs are being lost. It makes me happy that [the community] gives me the opportunity to sing, like it was before with our stories and our legends, and teaching them to the children.”

After the speeches, music, and demonstrations were finished onstage, the crowd left their seats and gathered at an edge of the plaza where various exhibition stations were set up: for music, crafts, agriculture, and gastronomy. At each of these stations, members from the communities of the Potato Park offered demonstrations and talked about their local customs.

A Rich history of textiles

A woman from the village of Chahuaytire in the Potato Park displayed some of the tapestries the community has produced. At the time of the Spanish arrival in the 16th century, Andean cultures had no written language like most understand it, fueling the misconception that people of the Andes were illiterate. But the symbolism present in tapestries, transmitted through thousands of years of tradition, is just one of the complex ways that the ancestors the Inca learned to record important stories and information through millennia.

Plowing the fields is full of sacredness

Men from the village of Chahuaytire also demonstrated how they plow their fields to plant potatoes. The two men in the center acted as the cattle, mooing, swinging their heads, scraping their feet, dragging their plow through the plaza, charging into the crowd. The woman in the foreground is holding a glass of Mat’ina, a type of chicha, a fermented corn brew that’s drank in special occasions, such as plowing their fields.

Reflections on the event

I found it interesting that the event attracted such a small crowd. The droves of tourist buses that on any other day would be stopping in town for maybe a half hour to shop for souvenirs didn’t arrive on this day, instead of passing by. Most of my friends didn’t know about the festival until after it happened. And locals continued about their daily business, seemingly indifferent.

This is something that I’ve gotten used to, but have never completely understood. Every day of living in this special Andean village offers the opportunity to more deeply understand, through immersion and engagement, what living in the Andes is all about.

Join our Patreon Community to support more content like this, and help us promote all the great things Peru has to offer!
Andescelebration
FacebookTwitterWhatsappEmail

The Art of Natural Paper Making by an Indigenous...

Visiting Cusco, Peru: A City that...