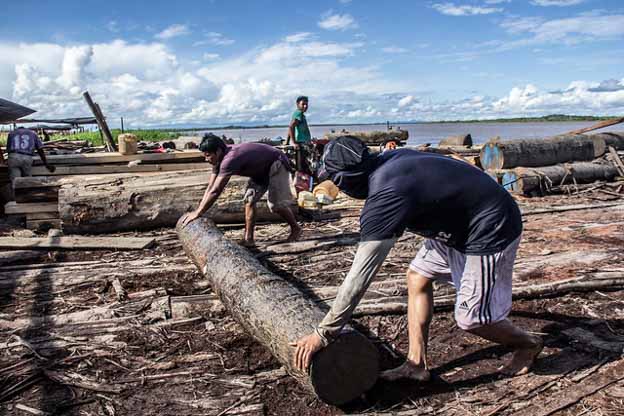 According to Global Witness, over 60 percent of the timber inspected by Peru’s Agency for the Supervision of Forest Resources and Wildlife (OSINFOR) in the Loreto and Ucayali regions has illegal origins. Here is how and why this is happening.

According to a recent report by Global Witness, there is evidence of disarray and illegality in Peru’s timber industry.

The report focuses on the regions of Loreto, Ucayali, and Madre de Dios, which are Peru’s three most important regions for timber extraction. According to the report, which is entitled “The Forest Avengers,” all three regions have high rates of illegal timber extraction practices.

One of the findings is that over 60 percent of the timber inspected by Peru’s Agency for the Supervision of Forest Resources and Wildlife (OSINFOR) in the Loreto and Ucayali regions has illegal origins. That timber was extracted from land owned by people who have been sanctioned for serious violations of forest legislation.

Customize your trip to Peru with us

However, this figure has been deemed conservative because it only reflects the forested areas that have been supervised by OSINFOR, which are only about 40 percent of Peru’s forests, according to the report.

Laura Furones, the director of the Peru campaign by Global Witness, says that the results of the analysis demonstrate a strong trend because they include data from the last 10 years. “This is not an anecdote or an eventuality; instead, these are high rates of illegality based on the evaluation of official data,” says Furones.

Global Witness, which works to defend human rights and protect the environment, offered a panorama of the ways in which the timber is processed, the role of forest regents, and the participation of sawmills in the illegal industry. The report also includes the statements of some loggers who were recorded by hidden cameras. Some of them revealed that they know of many methods that are used to break the law.

How illegal timber is processed

For many years, loggers in Peru have been transporting large quantities of illegally-sourced timber using methods that make the timber appear to be legal. They move the timber through a series of canals, often with the help and complicity of lax supervision, according to “The Forest Avengers.”

The report also provided details on a variety of logging permits that have been used to launder about $112 million in timber, including permits that allow land to switch between agricultural, forest, and private use.

Julio Guzmán, a lawyer with the Ministry of Environment of Peru, is very familiar with the loggers who are on the hunt for different methods to help them continue with their illegal activities. “The illegality keeps changing,” says Guzmán. He says there is a need for the implementation of reliable mechanisms to assist in the traceability of timber, which could help to reduce these crimes.

One illegal activity involves “ghost trees.” The illegal loggers declare false locations in a forest, then move to a different location to secretly cut down trees. In the past decade, at least 88 million cubic feet of timber have been destroyed using this method. This corresponds to about 113,300 trees.

Another illegal method involves local forests, which are typically managed by municipal governments or small committees. About $85 million in timber has been processed from these local forests in all of Peru. Furones, of Global Witness, says that 95 percent of the operating plans inspected between 2010 and 2017 included timber taken from other locations.

“When OSINFOR intensified their enforcement actions in forest concessions, native communities, and other places from which timber is extracted, the illegal activity moved into local forests,” explains Guzmán.

Forests that are subject to changes in land use, in addition to forest plantations, are also sometimes used for illegal logging practices, according to Furones. Between 2016 and 2018, a total of 5,000 forested areas (covering just under 70,000 acres) were created, which, according to Furones, is “an open door to illegality.”

Forest regents —referred to as “consultants” before 2014— can also play a key role in these illegal practices. A in 2018 explained how communities can sometimes be left to pay fines because of the actions of forest regents.

Forest regents are responsible for the information recorded in management plants. They sometimes take advantage of their roles and record false data in extraction permits. The cycle of illegal activity is then completed with the support of regional officials.

An example discussed in the Global Witness report is that of Roldán Pinedo Ríos. In 13 different operational plans that were approved by the government in the Loreto region in 2017, after Pinedo Ríos had obtained his regent’s license, 100 percent of the trees inspected were nonexistent. Those operational plans were used to launder almost 1.6 million cubic feet of illegal timber with an estimated value of $7 million.

Pinedo Ríos’ case is far from the only example. There are 10 additional people, from forest regents to other officials, who signed dozens of management plans that include nonexistent trees. Nine of them have already faced legal proceedings for lying in the documents. In total, there are 572 operational plans that include these “ghost trees.”

“The information about the consultants and regents is a reflection of the level of impunity,” says Julia Urrunaga, the director of the Environmental Investigation Agency (EIA)’s Peru program. “For years, they have been validating nonexistent trees to launder millions of dollars in illegal timber,” she adds.

On a separate note, some of the largest sawmills in the Ucayali and Loreto regions have received enormous shipments of illegal timber. Eight of these sawmills (four in each of the two regions) were analyzed in the report by Global Witness. Based on data from forest transport guides and inspection reports from OSINFOR in 2016, 60 percent of the timber processed in the sawmills in Loreto, and 50 percent of that from Ucayali, had illegal origins. The total value of the illegal timber processed in these eight sawmills, in 2016 alone, was $16 million.

“I believe it is important to see the quantity of illegal timber that enters the sawmills, where so much of this resource is processed,” says Urrunaga, who questions the idea that OSINFOR does not have the ability to oversee this business.

Global Witness’ report also involved statements by undercover investigators. Furones explained that the use of a hidden camera to record conversations with loggers in the timber industry allowed the researchers to discover whether they were aware of the illegal activity in the industry.

The statements are part of a video in which some loggers can be heard commenting on how environmental audits were conducted when OSINFOR was under the control of the Ministry of Agriculture and Irrigation.

One of those loggers revealed that when the National Institute of Natural Resources (INRENA) was in charge of the audits and supervision, the loggers themselves covered the expenses of the inspections. Another logger mentioned that they sometimes weren’t inspected at all; the inspector may be in an entirely different location, but would sign the certificate as if they had arrived to the forest. A third logger recounted that before 2009 —when OSINFOR became affiliated with the Presidency of the Council of Ministers (PCM) of Peru— everything was “very free” because any person could cut down a tree and send it to a sawmill.

The loggers also discussed OSINFOR. “Now, they do inspections,” said one of them. Another commented that with the state agency, their work is more difficult because they cannot take out as much timber as before. “We have had to adjust,” said a third logger.

In December 2018, the Peruvian government ruled that OSINFOR would leave the PCM and become part of the Ministry of Environment. This ruling has sparked controversy within the country because some sectors feel that it takes away independence from the organization.

That controversy is not the only opposition to the new measure. has expressed disapproval because, according to them, the new policy violates the environmental agreements in the United States–Peru Trade Promotion Agreement, which was implemented in 2009.

In the Office of the United States Trade Representative, a consultation process about the ruling has already begun. However, the administration surrounding Peru’s president, Martín Vizcarra, has defended it.

The report by Global Witness also questioned the measure because, according to Furones, it could weaken OSINFOR. “In the last 10 years, OSINFOR has demonstrated that it is doing good work. It is essential that its independence is restored and that its powers are expanded to be able to confront the new forms of timber laundering that are emerging.

For Urrunaga, the report serves to demonstrate the importance of maintaining an independent supervising organization. “The government should reconsider and return OSINFOR to the PCM. Without an independent institution, there cannot be traceability, nor can there be believable legal timber.”

Attorney Guzmán proposed profound changes. “Peru should update its strategy against illegal logging. The current strategy was approved in 2002 and is no longer accurate to today’s reality. We should also make a coordinated effort that includes every institution. Otherwise, we will continue to have isolated proposals within each institution in the country, and we will not confront the problem in an appropriate way.”