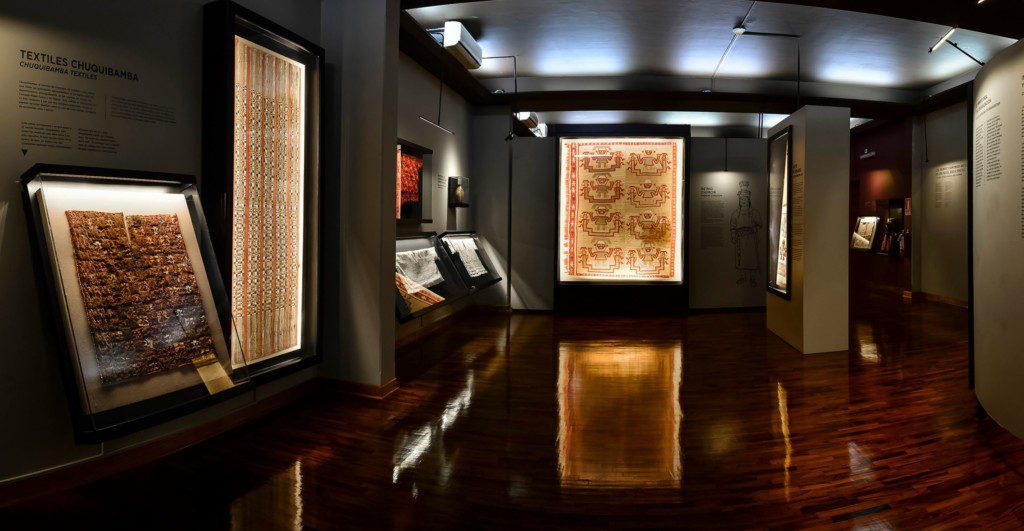 What follows is a story of the unique textile art collection of Mr. Yoshitaro Amano, founder of the Amano Museum.

The collection is incredible array of Pre-Columbian art, spanning from V century B.C.E. up through the late XV century. This story is about ancestral civilizations with advanced spinning skills, whose most beautiful pieces had carefully been kept by nature for centuries, challenging extraordinary circumstances.

During the clash of cultures resulting from the European conquest of the Americas, the local artistic expressions were considered incomprehensible and almost all textiles were burned in mass. Fortunately, later on, the European modern artists from XIX and XX centuries, like Paul Gauguin or Pablo Picasso, comprehended that it was about different philosophies and aesthetic canons and found in these artistic expressions, inspirational sources for their own representations.

Luckily, some of the most sophisticated textile art pieces from the pre-Columbian history are impeccably preserved and can be admired thanks to Marine engineer, entrepreneur, philanthropist but mostly a visionary explorer from XX century, Mr. Yoshitaro Amano. He unquestionably lived an epic life all around the globe and his profound admiration for the pre-Columbian art traditions led him to found a museum in Lima, in 1964.

Therefore, we felt honored to be invited by Mr. Mario Amano, inheritor and CEO of this family museum, to discover its fascinating art collection.

Mr. Amano, the exquisite quality of the pieces of your museum captivates international scholars and also important visitors like the former U.S. President Bill Clinton and the Japanese Emperors Akihito and Michiko. How did your father, Mr. Yoshitaro Amano, conceive to create this museum?

MA: It could be said that this museum rises as a dream in my father’s mind since he was seven years old. My grandparents were builders in Japan and one day, while digging, my father, found an ancient arrow with a stone arrowhead for which he received much praise… His respect for history and personal curiosity led him to live a life full of explorations worldwide. His life is detailed in his autobiographical book.

In his maturity he settled in Peru as a shipping and forestry businessman and he was also appointed representative speaker for the Japanese community. In the course of an invitation to the north desert coast of Lima, he discovered some impressive textile works from the Chancay culture. Beyond the local thought then, that mostly appreciated pieces made of precious metals, my father realized the importance of those findings.

Gradually, along the years, he became a textile and ceramic specialist and many people offered him pieces, with no meaning for them. By the 1960’s, my parents housed at home a vast collection of textiles. These were of such a high quality that many admired scholars like Federico Kauffmann Doig, Julio C. Tello and Luis Guillermo Lumbreras, used to visit us. In 1964, for better conservation and display of the pieces, my father decided to buy the house next to us.

MA: The exhibition takes our visitors on a journey through diverse rooms that visualize the evolution of Peruvian woven clothing through their aesthetic canons and explain the differences between the most important pre-Columbian cultures.

It comprehends four rooms designed in accordance with three expositional concepts: The Chronological Textile Sequence Rooms, which covers the emergence of textiles around the world, the first raw materials employed and textile history within Peruvian territory. The Raw Material and Textile Room, displaying the entire process required for the production of the textiles exhibited in the museum, from the selection of raw materials, to dyeing, spinning and the types of loom employed. And finally, The Yoshitaro Amano Room, especially for those interested in studying the textile art developed by the Chancay culture, through close observation.

The exhibition articulates diverse perspectives for the pieces and we always recommend the museum guided tours to get the most from the visit.

The art pieces portray a large variety of figurative and geometric abstract patterns… What can we learn about these advanced designers by the narrative of their textiles?

MA: Actually, these textiles conceptualize their world and showcase the essence of ancient Peruvian social organization. Without a written language, the visual design was essential to disseminate their beliefs among other peoples: their ecological systems, religion and philosophical practices are woven into these dramatic textiles. This collection represents the heights of their cultures’ artistic achievement.

Pre-Columbians believed in a natural world based on powerful gods and supernatural beings. They used to evoke new deities through the ritual use of hallucinogenic plants and visionary trances. Using ceremonial costumes, they were transformed in the eyes of their subjects into intermediaries for the gods, or even into divine beings themselves. For sure, this philosophy has been very motivational for complex designs and for elaborated textiles.

Plain weave gave way to dyed fabrics and to the creation of a range of geometric forms that were incorporated into the textiles and later on complex animal forms, such of those representing the gods, were introduced. The dyes in the pieces were obtained from mineral, vegetable and animal sources. The painted decoration was probably achieved using small brushes or cotton swabs of different sizes, with the artist employing a flexible stencil to facilitate repetition of the design.

Textile making was mostly carried out by women and there were special workshops for large scale textile production.

Your collection enfolds art pieces from all pre-Columbian civilizations…Which ones produced the finest textiles art works?

All of them contributed to great advances and represent an important chapter on the pre-Colombian art history; actually all the cultures nourished each other. For example, the people from Paracas developed most of the techniques known by pre-Columbian cultures which are still used to this day by Peruvian artisans.

Nevertheless, it is true that Huari Empire textiles are ranked among the finest found anywhere in the world. These masters of the art of dyeing produced an enormous range of colors, creating more than 150 tonalities. They developed brocading, warp pattern, double cloth, painted cloth, flat braiding, caps and textiles incorporating feathers. The Huari tended to use wool in their textile work.

A few years ago, the Museum of Art Cleveland and the Museum of Art of Fort Lauderdale, organised the most important art exhibition on the Huari Empire in the U.S.A. and we contributed with major textile pieces.

In this important legacy result, we can appreciate that the high quality of the Andean fibers used for the making of the pieces, are as important as the creativity and the technique. Back to the present, how do you think the country is managing these major resources?

MA: Original Andean fibers like cotton and camelid wool, along with the great reputation for the ancestral art of weaving, have positioned the Peruvian textile industry into highest prestige parameters.

Concerning the raw materials and during the past decades, the local mentalities and philosophies have evolved. Our ecosystem is being managed in a very respectful way not only by the governmental institutions but also by the entrepreneurs and artisans as well, probably because once they were raw collectors too. I still remember when the local cotton was not valued because it was thought that it could pollute other kinds of cotton. Hopefully, the old removing practices are no longer used. In addition, the use of ecological and biodegradable agents, have tremendously benefit this industry.

Peruvian ancestral traditions are perceived now as artistic traditions with the aim to preserve, not to exploit…A significant achievement.

#TakeMeBacktoPeru: Be Part of Our Video Dedicated to Peru