The Jellies of Paracas 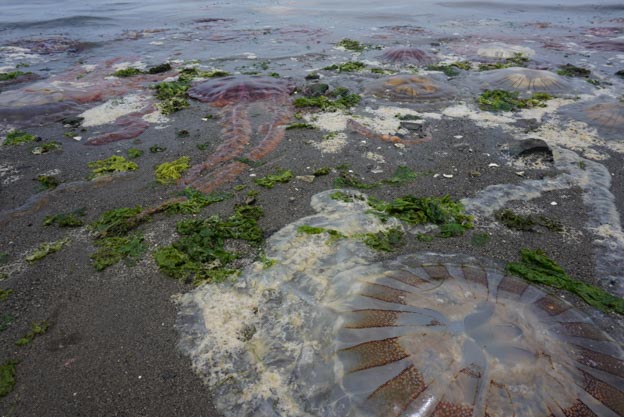 Have you been to Paracas Bay on a warm summer day and seen swarms (better known as blooms) of these magnificent gelatinous creatures?

Or have you seen the jellyfish swimming around while you were kayaking, or even clunked into one while kitesurfing? Have you ever wanted to know more about these magnificent creatures? Then, allow me to explain.

I didn’t know jellies until I came to Peru.

Being a Pennsylvania girl, I didn’t grow up with these jellies while I spent my yearly summer vacation at Cape May Point, NJ. Maybe that’s why they fascinate me so much, and what inspired me to learn more about them. After living in Lima for over 20 years, I’ve seen the jelly blooms come and go.

They are called Chrysaora Plocamia, or commonly known as Sea Nettles, and they belong to the Pelagiidae family. In Greek mythology, Chrysaor was the brother of Pegasus, son of Medusa. In 1830, the French surgeon, botanist and naturist Rene Primervere Lesson discovered the species.

You can find them along the coasts of Peru, Chile, Brazil, and in some areas of the US. Since they have few natural predators and increasing food sources, their populations are on the upswing. Warming waters a possible cause for these changing conditions. Interestingly, they are , eating other jellyfish, ctenophores (comb jellies), zooplankton, and the occasional crustacean. Less common food for the nettles mosquito larvae and minnows.

These creatures are generally about 30cm or a foot in diameter but can grow to be more than 2 feet. Their glorious, lay-like tentacles can be up to 2 – 3 meters (6-9 feet) long. If you’re lucky enough to see them swimming instead of being on shore, you’ll probably marvel at these magnificent, majestic animals painted with beautiful reds and yellows.

Watch out for the Tentacles (ouch, that burns).

Their tentacles are covered in nematocysts. These needle-like spikes stick in your skin if you are unlucky enough to brush up against one, or if you happen to be dinner for the day, they will paralyze you. Although the poison is not enough to kill humans, it can burn.  If you are stung, the Mayo Clinic recommends rinsing the affected area first with seawater, not fresh water, and don’t use vinegar. Apply shaving cream or a mix of seawater with baking soda or sea water with talcum powder and let dry. After the compound dries, scrape it off. To complete the sting treatment, apply calamine lotion as the final step.

If you were curious about these creatures, I hope that you learned something. If you travel to Paracas frequently, as the water temperatures cool, their population should subside.

Join our Patreon Community to support more content like this, and help us promote all the great things Peru has to offer!
beachjellyfish
FacebookTwitterWhatsappEmail

DB Peru: Making a Difference Through Healthcare and Education

How is Your Spanish? The Benefits of Bilingualism

Tips for Traveling in Peru from an Experienced Anxious...

Paracas And Huacachina Will Host The 2019 Sandboard World...

Would You Like to Help Peruvian Kids Get an...

Family Travel In Peru: Alternatives For...

THE SUNSHINE ROUTE: Hotels On The...

Tourist Flow to Paracas Would Increase...