When Conquistador Jeronimo de Aliaga reached Peru from Panama, he must never have thought that the plot of land given to him by Pizarro as a reward for his services would become the oldest house in the Americas continuously occupied by the same line: the De Aliaga family.

Neither would he have imagined that one of his descendants, after seventeen generations of the family had lived without interruption in the house, would share his name; but, instead of wielding a sword, the Jeronimo de Aliaga of our times is responsible for the gastronomic experience offered by the house today.

“Opening De Aliaga mansion to tourists —recalls Jeronimo— was the idea of my grandfather, Eduardo Arrarte, founder of Lima Tours. Not only did my family live in the house, but my father and an aunt still live there. So, the Casa de Aliaga is above all a family home. But its historic importance, the artwork it contains and also the need for a source of income to ensure its upkeep and maintenance, meant that we have opened the oldest part to visitors while keeping the private apartments for those who live there”.

From The Spanish Conquest To The New York Times

The Casa de Aliaga was built on a huge plot occupied by the Inca chieftain Taulichusco, the highest authority in the Rimac River Valley. After the conquest of Peru, this land was distributed by Pizarro among his senior commanders. Pizarro himself took the land now occupied by the Presidential Palace, while Jeronimo de Aliaga built his house on a 2,500 square meter plot, and over the years it has hosted artists pursued by the law, presidents, intellectuals and even saints, such as St. Rose of Lima.

The first Jeronimo de Aliaga left the port of Sanlucar de Barrameda in Cadiz at the age of sixteen, bound for Panama. From there he traveled with stores and munitions to Peru, as a member of the force commanded by Conquistador Pizarro. He took part in the foundation of Lima on the 18th of January 1535 and in the creation of San Marcos University, the oldest in the Americas.
The Historic Center of Lima, and many other districts of the capital, contain great houses of that time, such as the Goyeneche, Torre Tagle and Riva Agüero mansions, but very few open their doors to visitors.
Although much more recent from a historical point of view, the Casa Moreyra is today a well-known restaurant; the Pedro de Osma museum and the Garcia Alvarado mansion stage occasional celebrations, such as weddings or corporate events.
The closest to the Casa de Aliaga is the Huayoccari Hacienda in the Sacred Valley, Cusco. “We both opened our homes to show the wealth of works of art they contain. In our case, the art collection and the wide variety of styles to be seen in the house, including French, Baroque, Gothic, Viceregal, Neo-Gothic, classical and even Modern, as introduced by the current residents. That is what brings it alive.” And that is why the mansion has been a national monument since 1972 and why The New York Times describes it as an obligatory stop on any visit to Lima.

The Historic Center has been changing for many years, ever since former mayor Alberto Andrade gave priority to its appearance and safety. “That was the idea. As with most countries that have a historic tradition comparable to ours, the center should be an ever more important part of any visit to Peru, and in its small way, the Casa de Aliaga contributes to this”.

More Alive Than Ever

What is certain is that some eight thousand visitors a year come to this house, next to the historic post office building and to one side of the Presidential Palace. Jeronimo de Aliaga has four proposals for these visitors:
“On one hand, we have guided tours offered through agencies. During these visits the group comes with its own guide, although we can make specific recommendations regarding the guide. Individuals wishing to visit must make a reservation in advance to ensure that the service is available, and for them the house has its own guide.“

The best part of the experience is the gastronomy. “We offer lunch and dinner for groups of up to 120 people in two of the most important rooms, the Salon de los Azulejos, which was painted by hand and whose tiles were brought from Seville in the 17th Century, and the Salon Dorado, with its Luis 16th furniture.”
“We have nearly finished a dining room on the ground floor; this will free the two rooms mentioned, thus improving the experience and reducing group size, as the new room will seat a maximum of eighty people. Another option consists of corporate events and programs. We have room for two hundred people standing and offer a suitable menu for such events in line with the client’s requirements. Finally, we have a seven-course taster menu. It is much more flexible and responds to market forces. I make personal visits to organic producers and fairs, and I also have specific suppliers for different products. I make the different courses from the ingredients I can obtain.”
In general, the menu is based on two gastronomic styles, one of purely Peruvian Creole food, in line with the personality of the city of Lima, and a lighter and gentler international version. “The latter is designed with the type of visitor we receive in mind; most of them are from Europe and the United States and are 60 years old or more, so they seek lighter dishes or special diets. We can also make up specific menus as requested by individual groups.”
The De Aliaga mansion is more alive than ever because its history has been enriched by experiences, the descendants of its original owner and artistic diversity. It also has tourist initiatives that share all of this with its 21st Century visitors.

“The whole of my family is involved in this enterprise: my father and aunt handle public relations, my sister Maria Eugenia does communications, my brother Gonzalo is responsible for administration and I’m in charge of the food. We look for equilibrium between the house as a family home and the house as a tourist experience. We go from one to the other and little by little, we are adapting to new situations and requests from visitors”.

HISTORICAL PERU: COLONIAL MANSIONS
HOW TO SPEND 48 HOURS IN LIMA
SIX CHURCHES YOU MUST SEE IN LIMA

10 Things You Should Know Before Traveling to Lima 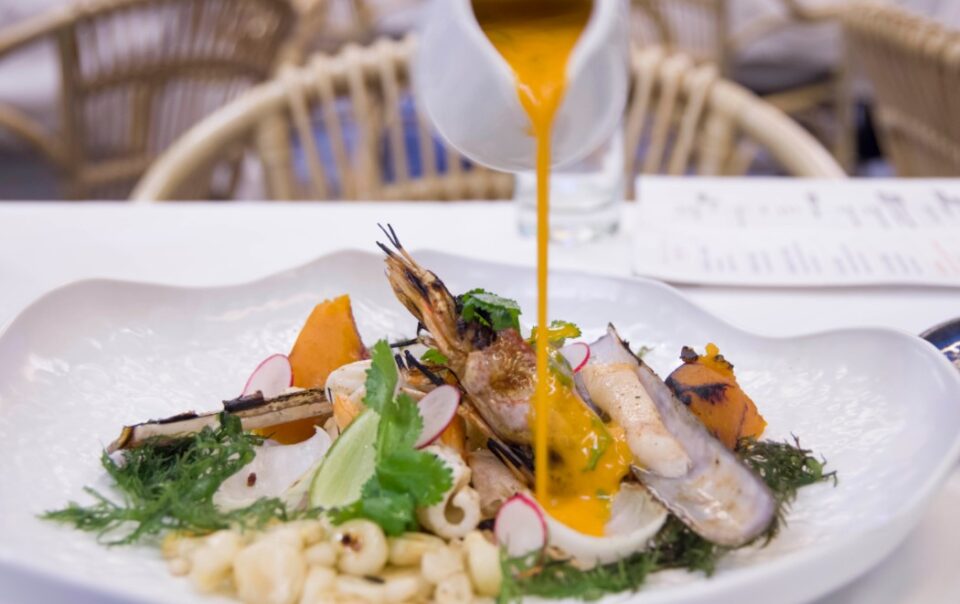 6 Seafood Restaurants to visit in Lima