We make our way through San Martin, an area of Peru that is enjoying newfound popularity thanks to the agricultural recovery of a global favorite, cacao.

The road has been difficult. The journey, in­tense. Cacao spent many years as an over­looked, secondary crop in the Peruvian jungle – nearly invisible. The local varieties would have been lost beneath the economic and social strife that overtook this area of the country (ar­med militia and drug-trafficking) if it weren’t for the international involvement and pacification process that began some years ago.

Many of the region’s farmers have now traded in their coca plants for cacao. Today, the people and energy of the San Martin region are tranquil. The faces of the farmers reveal satisfied smiles. They have overcome chaos, anguish, and fear, and now re­vel in the success of their products throughout Peru and the world.

We are going to traverse eight projects in three days, across the San Martin region. Tarapoto will be our base. The geography is not easy. Luckily, the highways are in better condition, and the scenery is stunning – painted a million shades of green. We are accompanied by a local guide who will take us through the area. Traveling with a local is the best way to avoid mishaps, as we are in the jungle, and the jungle has its ways.

After driving three hours from Tarapoto we arrive in Juanjui, where we are greeted by the members of the Cacaotera-Acopagro Agrarian co-op, and 750 farmers from central Huallaga (Juanjui, Sa­posoa, Bellavista, Picota). They work with the cacao clone CCN-51 – due to its heightened productivity, as well as Trinitario clones, and the Amazonian Foraste­ro variety, all of which come together to produce the cacao that they then sell to the world.

The co-op has its laboratory and headquarters in Juanjui, and from there, they offer consultancy, credit, and social sup­port to their farmers. Many wonder why the CCN-51 is used, since it can ruin plantations, contaminate local cacao varieties, and compromise biodiversity. However, it is important to understand that CCN- 51 helped many of these farmers and their families re-establish peace in a time when the region was overcome by terrorism and drug trafficking.

Thanks to the CCN-51 clone, these farmers were able to re­place their coca-plant crops without suffering from grave economic blows. Now that the chaos has sub­sided, farmers can make room for native varieties and bring Amazonian cacao back into the limelight.

2. Beneath the banana plantation

Our journey continues to Pajarillo, where we will visit the clone gardens of port Tarata, but first we must cross the Huallaga River. We get out of the car and watch as the other cars pull onto the ferry, between a maze of food vendors. It’s midday and the heat is unbea­rable, but our appetite for adventure keeps us going. After nearly two hours of transit, we arrive at an immense banana plantation, where the tall bellaco banana trees provide shade for future cacao plants.

Here, farmers work with associated and integrated crops in order to generate more benefits, and then they pool together the fruit from their individual plots in order to yield a greater volume. The neighboring orange trees help us fight the heat, providing a cool breeze and fresh juice that we drink, while admiring the drive of working locals.

The first day of our route is a long one. If you follow our path, we recommend lots of patience. One can also break the trip up and stop in any of the various cacao plan­tations along the way. We’ve traveled all day, and as night falls, we arrive at our final destination: the town of Pucacaca – a 40-minute drive from Tarapo­to. Pucacaca is one of the places where raw cacao comes to be transformed, and is also the location of the Makao Peru headquarters.

This company works to help low-income farming towns by purchasing organic cacao directly from the farmers, and hiring people from the communities to work in their small, well-equipped factory. Makao produces chocolates of different per­centages (60%, 70%) and a variety of types, including: chocolate with nibs, aji charapita, pecans, macambo, and milk chocolate, among others.

After driving for an hour and a half from Tarapoto, we arrive in Morillo (in the Chazuta district), where Marcelino Zumba owns a plot of land. Marcelino is part of San Martin’s govern­ment project, Proyecto Cacao. He has been working with cacao for seven years, and has been using TAPS fertilizer and synchronized pruning techniques since 2012, which he learned from cacao producer Edil Sandoval Arevalo.

Marcelino’s plot has everything: ICS-95, hybrids, CCN-51, and a few native cacao species that he treasures. This plot is an example of the project that gives farmers guidance in fertilizers and pruning, plague management, and crop health, to promote better production. As a result of this, Marcelino’s produc­tion has increased 50% since 2012.

In the district of Chazuta, cacao production has im­proved lives, including those of the women that make up the Cacaotera Mishky Cacao Association, who have developed a small factory where they produce chocolate and cacao products. These 13 mothers came together in 2003, after deciding to forgo coca leaf cultivation and dedicate their time to cacao.

Upon our arrival, they welcome us by singing songs that they’ve written in celebration of the cacao plant. Then, they show us their work. Their products have gained national and international recognition: the association was just awarded a prize from the International Cho­colate Awards, and recognition from Paris’ Chocolate Salon (France).

The women are peaceful, confident, and sweet. Their sweetness is reflected in each of their products: marmalades, chocolate paste, cho­colate tablets of varying intensities, milk chocolate, white chocolate, and macambo-fruit chocolate.

6. Coffee and cacao in Lamas

We spend our last day in Lamas, a peculiar town fa­mous for its traditional garments and dances, and for the giant, stone castle that sits overlooking the com­munity. Here, we find the Oro Verde co-op, one of the biggest and most developed organizations in the area that makes cacao and coffee products for export. Initially founded by 56 families, Oro Verde aims to bring together small producers who are interested in participating in fair-trade and organically certified farming.

The co-op is currently made up by 1,200 fa­milies – 70% of who are Chanca Lamistas, and 30% of who have immigrated from Northern Peru. In addi­tion to selling and exporting, Oro Verde also offers a variety of products on site, including: organic coffee, pure chocolate, honey, and an amazing native, 72% chocolate produced by the Amazona brand, aptly named Valle del Chanka.

Our next stop is at Mayo industries, where some of San Martin’s most famous chocolate is made: Orquidea. Mayo works with native communities and brings together small-time farmers interested in cacao as a way of life. Their processing plant uses advanced technology to make an assortment of different types of chocolates: dark, pecan, kiwicha, co­conut, and milk – to name a few, as well as a line of organic chocolates.

The last stop on our cacao journey is Exotic, loca­ted in Tarapoto’s main plaza. This small store, run by Claudia Vásquez, sells gourmet sweets made with chocolate from Chazuta. Aside from the variety of well-made dark, milk, and fruit chocolates, Exotic sells truffles with interesting fillings, like aji (chili pepper) and lemon – both of which amaze the palate in unique ways.

We could not have asked for a better ending to our cacao journey.

This article has been updated from its original publication on August 7, 2018.

SAN MARTÍN: ENJOY A DIP IN THE AHUASHIYACU WATERFALL

FROM BEANS TO DELICIOUS…COFFEE AND CACAO IN PERU 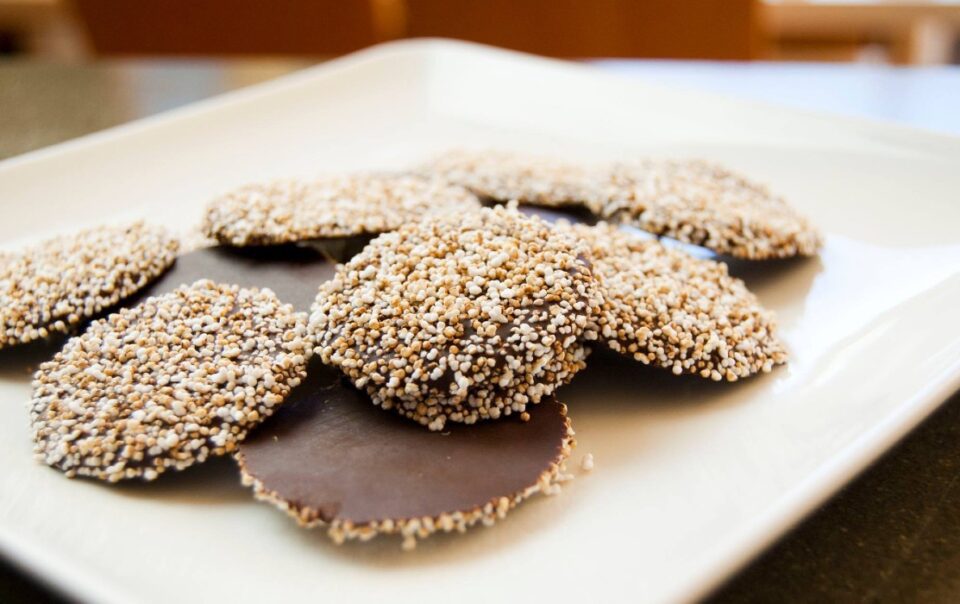 Tastes, Smiles, And Smells Of The Jungle At The Tarapoto Market 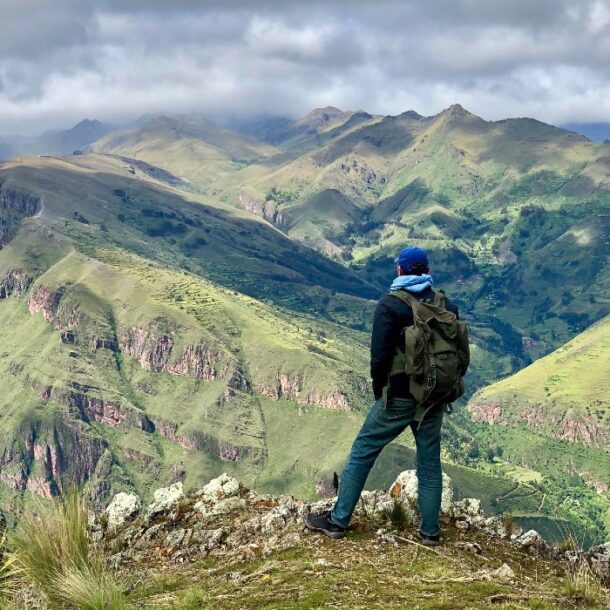 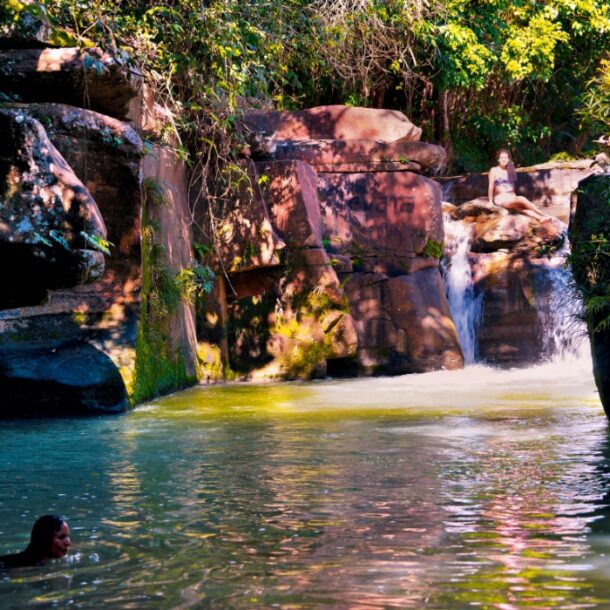 Visit the Lush Hillsides of Lamas, Where Waterfalls and Archaeology Await
Next Article