Top Stories
Travel Updates: Coronavirus (COVID-19) Outbreak in Peru
Peruvian Products with Intense Flavors for Curious Foodies
I Went to Machu Picchu During COVID-19 and...
5 Things to Know About Panetón: A Peruvian...
Visiting Ayacucho? What to Know and Do for...
Zig Zag Restaurant in Arequipa: A Fusion of...
The Complete Travel Guide to Visiting Arequipa: What...
Pezcadores: Delicious seafood off the beaten path in...
Peruvian Recipe: How to Make a Warm and...
7 Attractions in the Amazonas Region of Peru...
Home Archaeology The Ancient Khipus of the Laguna de Los Condores in Chachapoyas
ArchaeologyTraveling in Peru

The Ancient Khipus of the Laguna de Los Condores in Chachapoyas

by Traveling and Living in Peru January 7, 2019 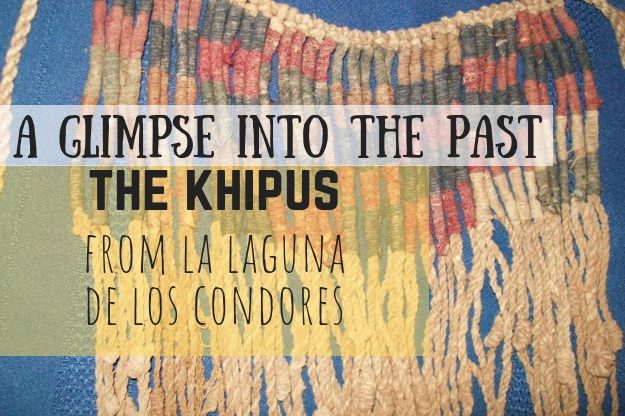 Thanks to the work of researchers over the past decade in Peru’s Laguna de Los Condores, we now have a clearer idea about the khipu’s primary purposes.

Khipus were the ancient Andean way of record keeping. And until recently, very little was known about these strange knot-filled devices.

Gary Urton is one such researcher whose investigations have shed light on the use of the khipus. In collaboration with the Museum of Leymeybamba, he spent more than a decade excavating and analyzing a trove of more than 200 strands that were buried inside of tombs at the Laguna de Los Condores.

These were the first preserved khipus to ever be found within the Andes and helped researchers to piece together a narrative for what these strands might have been used for. He published the results of his studies in a book: The Khipus of the Laguna de Los Condores.

The find of 32 khipus on the lake was a big find. And it’s offered us the chance to get a glimpse into one of the Americas’ most enigmatic civilizations. Though the 32 khipus may seem to be a small number in comparison the 800 khipus that have been recovered within the Americas, the khipus from La Laguna de Los Condores stand out from all of the others. According to Urton, the khipus contain “some of the most complex examples of this recording device found anywhere in the Inca empire.”

Khipus helped the Inca keep track of a sprawling empire

One of the most important uses of Khipus was to keep track of the people and communities who were a part of the Inca empire. According to Urton:

In the Inca state, tribute was levied not in the form of a demand for goods from tribute-payers own stores; rather, what the Inca prized most highly was labor time: Each subject of the state was required to work a determined number of days every year on state projects; this included building and maintaining state facilities, such as administrative buildings, temples, storehouses, bridges, and roads, etc., and serving the Inca in whatever capacity was needed, including going to war.

In order to establish a system of forced labor, the Spanish relied on khipus as well. According to Gary Urton, Alonso de Alvarado, the first Spanish to arrive in Chachapoyas:

Lost details about the language of khipus

Despite recent breakthroughs within the past decades, there are huge limitations to our understanding of khipus. Researchers have learned to analyze khipus by looking at the sizes and types of the strands’ knots. But most people agree that there are parts of this language that we can’t decode.

It’s very likely that the Inca communicated meaning by choosing certain colors, as well as by creating structural features within the strands. This includes the spinning style used to create certain strands, plying directions, and knotting direction.

“Threads That Speak: How The Inca Used Strings to Communicate.” National Geographic. A 5-minute film that interviews forensic archeologists about their work on excavating khipus, and what Khipus mean to them.

7 Attractions in the Amazonas Region...