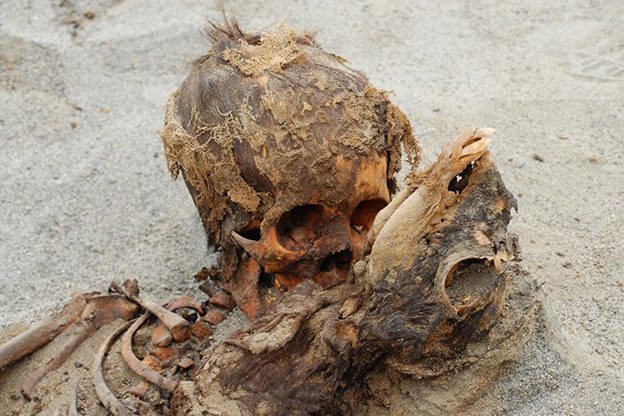 Recently the largest single incident of mass child sacrifice in the Americas, and perhaps the world, was found on Peru’s northern coast.

“More than 140 children and 200 young llamas appear to have been ritually sacrificed in an event that took place some 550 years ago on a wind-swept bluff overlooking the Pacific Ocean, in the shadow of what was then the sprawling capital of the Chimú Empire.”, National Geographic wrote.
These findings are a result of an investigation led by Gabriel Prieto of the Universidad Nacional de Trujillo and John Verano of Tulane University. It is supported by grants from the National Geographic Society.
National Geographic confirms that human sacrifice incidents have been recorded in colonial-era Spanish chronicles, but this discovery is unprecedented, particularly because of the small scale of the Chimú civilization. “At its peak, the Chimú Empire controlled a 600-mile-long territory along the Pacific coast and interior valleys from the modern Peru-Ecuador border to Lima.”, they confirm.

The findings include more than 140 sets of child remains and 200 young llamas, as well as rope and textiles. The radiocarbon tests dated to between 1400 and 1450. Both the children and the animals showed evidence of cuts to the sternum and rib dislocations, which is believed to have taken place to remove the victims’ hearts.

The children’s ages ranged from 5 to 14, and the llamas were less than 18 months old. It is believed that all of these living beings were killed in a single event, based on the evidence from a dried mud layer.

Machu Picchu Is Threatened By The Excess Of Visitors

Gran Pajatén: The Ancient Ruins so...

The Chakana: The Meaning Behind the...