5 Quick Books to Read Before Travelling to Peru

When I took my first trip to Peru, I didn’t know what I was getting myself into. I had the chance at the time to go to any number of places, and the choice was up to me. After reading texts on ancient history, and learning about the Incan culture in college, I decided to make my decision in a relatively unexpected location. Peru was somewhat of a mystery to me, and to delve into the unknown was very attractive. I wanted something exotic and adventurous, and that’s exactly what I received, and delightfully more.
As time drew nearer to our departure, it became increasingly necessary to learn more about the places I would be visiting. I read many books about this land that was fine-tuned by human hands for thousands of years.

To maximize your experience in Peru I have compiled the best books I know:

1. ‘Turn Right at Machu Picchu,’ written by Mark Adams, was instrumental in my understanding of Cuzco and the Inca Trail.

I also learned quite a bit about Machu Picchu itself, as the title of the book alludes to. Not only do you get the perspective of a man that has walked in your untraveled shoes, but he portrays the information in a way that is incredibly easy for you to understand. He wants you to succeed where he failed in a few aspects, and he isn’t shy about his shortcomings when coming to Peru.
Although he has edited adventure and travel magazines for most of his career, getting out into the field itself, is a whole new story. He intended to retrace the steps of Hiram Bingham, the explorer who discovered, or rather re-discovered Machu Picchu. Mark Adams’ experience embodies the type of adventure and exploration that I hope to one day achieve. 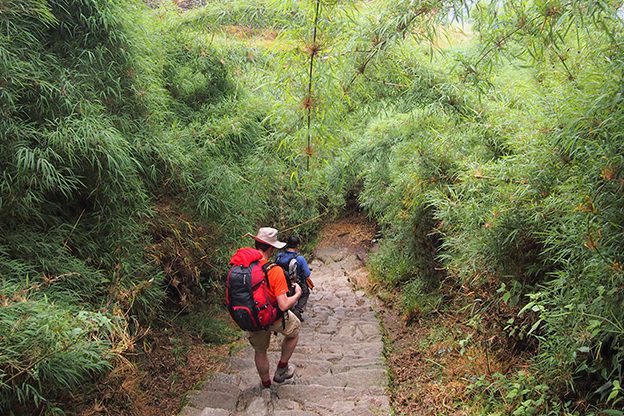 2. Speaking of Hiram Bingham, a pivotal piece of literature that I found fascinating was ‘The Lost City of The Incas.’

The book by Hiram Bingham himself offers a Yale-centric view of his discovery of Machu Picchu. Some controversy surrounded his discovery of Machu Picchu, like the removal of some priceless artifacts from the area. Since Yale claimed the artifacts, they returned them after a heated battle in and out of U.S. federal courts. The book itself is fascinating, and intricately details Bingham’s journeys through the Andes in search of sites the conquistadors themselves had trouble finding. With increasing wonder, this book inspired me to bring out my inner explorer, and purchase an Indiana Jones hat to wear when I made my trip!

3. Another general text that should be considered as essential is a Spanish to English dictionary (or app).

If you want to go more in depth, the free program Duolingo can teach you some useful basics very rapidly. I found myself having to speak Spanish quite a bit in many situations, including running to the store for deodorant, buying some lucky strikes, and purchasing items at the markets. I would also recommend a Quechua to English dictionary as well, considering at least twelve percent of the Peruvian population speaks it. If you happen to hike the Inca Trail, your guide will often exclusively speak Quechua to the porters who have lived their lives on the fringe of modern society. This language is unrecognizable to Spanish in every way, and it’s important to know the difference if you plan to visit the country.

4. For general, yet useful information about the big Peruvian cities and sites to see, purchase a reasonably priced copy of ‘Frommers EasyGuide to Lima, Cusco, and Machu Picchu.’

I read this book from front to back as well and found it very easy on the eyes. The information was presented in a very cut and dry format for the most part, but as I read it, I found the material highly engaging and fruitful, giving me countless ideas to whet my palate while traveling there. If you go to Cuzco, you will most likely be flying into Lima first. I, unfortunately, didn’t take the time to stay in Lima, but if I had, I would have pulled ideas for adventures from the book. Lima has a diversity all its own and would take several days to properly explore, but know that the experiences would be unique to that area and differ greatly from places you may visit elsewhere in the country.

5. Lastly, ‘Last days of the Incas’ by Kim MacQuarrie is highly recommended.

Peru is nearly synonymous with the Incan culture, and reminders of their splendor will pour over you during your time there. Understanding who the Incas were is easily one of the most important things to comprehend, especially if you intend to let the culture wash over you in all of its forms while you are there. Echoes of that past still erupt periodically in small ways. When I slowly traversed the hustle and bustle of the marketplaces, I happened upon a jubilant and humble Peruvian woman selling several different trinkets and treasures. I purchased a small chess set with the pieces representing the Incas and Espanioles, as she so eloquently put it. I think it is highly important to understand the story, as well as the history of the people to get a better grasp on their reality.

Plenty more literature exists out there to indulge your senses in. These are the ones I recommend the most. They are quick reads that will peak your interest even further for your upcoming adventure. So much more culture exists beyond what I have described to you, and without living there for an extended period of time, it may be hard to grasp the facts unless you delve into pages. Even if you don’t ever plan to travel to Peru, I still think these books are essential in your understanding of a larger world in general.

Who knows, you may even find yourself more interested in traveling the world once you finish the list. Only one way to find out!

Don’t Miss:
RAINBOW MOUNTAINS OF PERU
EDITOR’S TRIP TO CUSCO AND MACHU PICCHU (PHOTOS): WHAT TO DO IN CUSCO!
LIFE-CHANGING EXPERIENCE: HIKING THE INCA TRAIL

Join our Patreon Community to support more content like this, and help us promote all the great things Peru has to offer!
BookscultureCuscotravel
FacebookTwitterWhatsappEmail