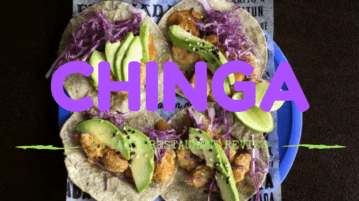 A newcomer to the Av. La Mar food scene Chinga Tu Taco opened up in October of 2017 to the delight of many who enjoy Mexican food.

It can be found on the corner of La Mar and Choquehuanca. This has been a very popular “fast-food” culinary corner for some time now. Chinga Tu Taco sits in between Juicy Lucy (prime hamburgers) and BAO? (popular street food, Asian-style steamed buns filled with meat, fish, vegetables, etc.).

It’s always wonderful to sit down with Chef Moma Adrianzen and listen to him talk about his restaurants, upcoming projects and the background behind them. Moma is a driven and passionate chef/entrepreneur who is interested in expanding the ethnic food experiences in Lima. Moma lived and worked in Mexico for five years and that influence has stayed with him and he wanted to create a restaurant that remained faithful to the authentic Mexican taquerias. 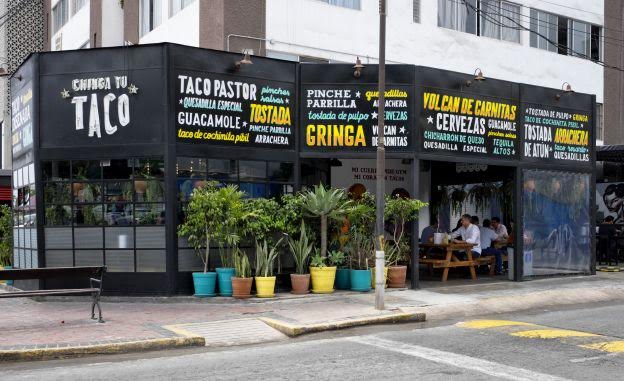 From this sprang the creation and concept of Chinga Tu Taco.

I have spoken to several friends that have eaten recently at Chinga Tu Taco. I received some mixed opinions…most really loved it, some thought it was good and would go back and a couple were far from impressed. I always make my own personal opinions, taking into account that typically when we visit any restaurant, we are most likely receiving food that has been carefully prepared because we are there to write a review. Perhaps some diners were expecting the tacos at Chinga Tu Taco to resemble the ones served at Moma’s restaurant, Jeronimo (opened in 2016).

Those tacos are starters served as a more refined finger food with a touch of fusion. The tacos served at Chinga Tu Taco are fast-food style, slightly messy and 100% authentic Mexican style…no tex-mex, no fusion and have nothing in common with the tacos served at Jeronimo. 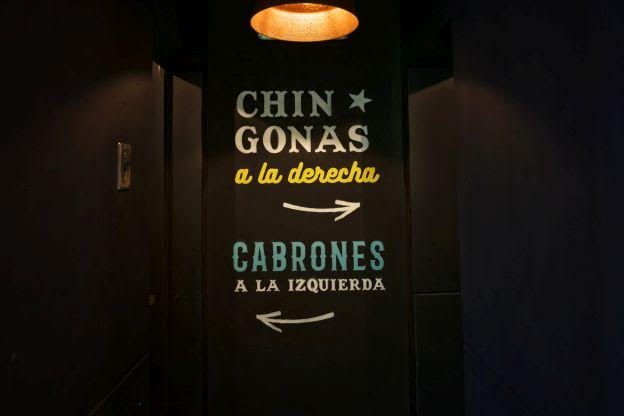 When you mention the name of the restaurant, Chinga Tu Taco, expect to receive some laughs or perhaps a stern look. The word, “chinga” in Mexico is slang for a popular swear word that begins with the letter “f”. You get the idea. It is not meant as an insult, more of a tongue-in-cheek laugh. The vibe at Chinga Tu Taco is ultra-casual, laid back and relaxing. The food is also without pretensions. They don’t take themselves too seriously. This is supposed to be a fun experience. 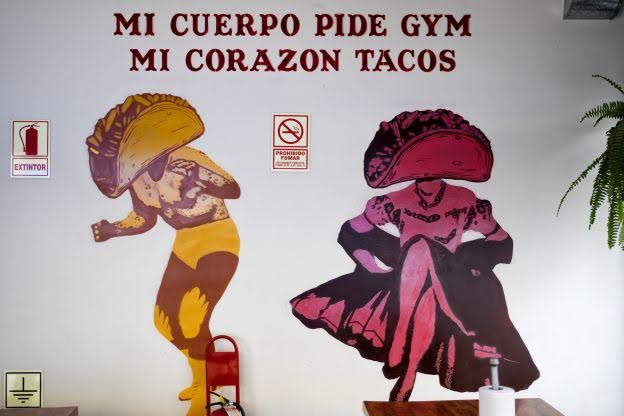 The exterior of Chinga Tu Taco is a black facade with bold and bright colored writing reminiscent of Chicha style street art which lists the various names of dishes. The interior is simple with some whimsical touches such as the painted infamous Lucha Libre masked Mexican wrestlers (some with masks on their heads and others with tacos as their heads). The decor is rustic and simple. There are a couple dining areas, one with four long wood tables with casual bench-style seating as well as another separate area with tables and chairs all under an enclosed gazebo (air-conditioned). Rolls of paper towels are on every table as well as vintage salt shakers. The floors are concrete throughout.

Chinga Tu Taco is self-service oriented. The menu is listed both on the wall and on laminated menu cards. You simply place your order at the counter with your name and after a few short minutes your name is called and your food is brought to your table. The servers were friendly, helpful and several spoke English. All the food is served on colorful, reusable plastic plates.

We practically sampled and shared almost every item listed on the menu (approximately 25 items not including beverages). Currently, the prices range between 6-12 soles for food. The prices vary depending on your choice of protein. I feel these are reasonable prices for the quality. The base of all of the dishes is the corn tortilla, the filling, and the sauce.

This food is meant to be eaten quickly and at the moment. If you wait too long, the corn tortillas can get dried out and lose their texture. We noticed there was a relatively quick turnover of tables. 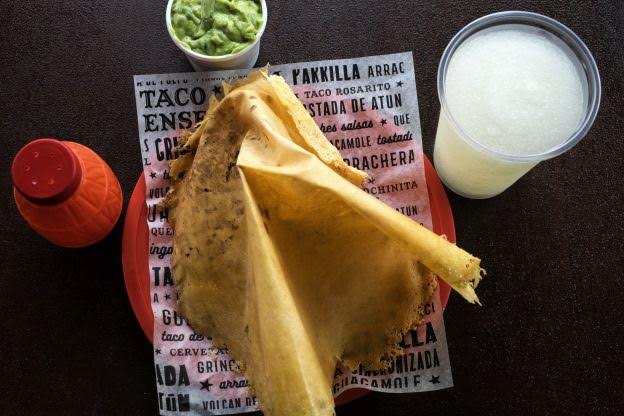 We began with the Chicharrón de Queso (S/. 8) served with the Guacamole (S/. 6). These are the only starters on the menu. The large, fried cheese “cracker” was light, airy and crunchy and perfect with the guacamole. 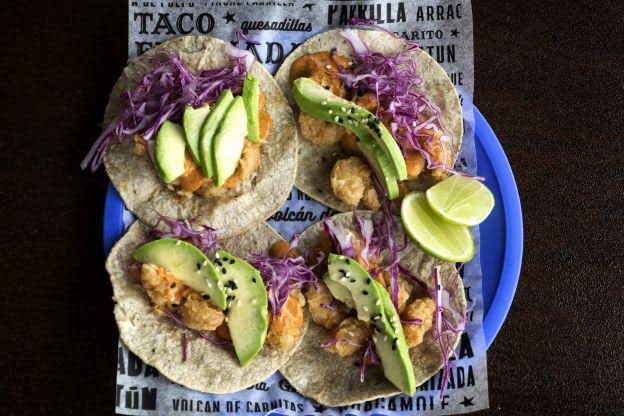 The Tacos (S/. 6-9) offer 7 filling options (cerdo, cochinita pibil, pastor, campechano, pipian de pollo, langostino diabla, longaniza). Our table favorite of the tacos were the langostino diabla which were lightly breaded shrimp accompanied by avocado, shredded cabbage, black and white sesame seeds and a slightly spicy sauce served on a soft, grilled corn tortilla. We also sampled the taco versions of tongue (lengua), tripe, skirt steak (falda). These tacos are smaller in size which enables you to order several varieties and share them. 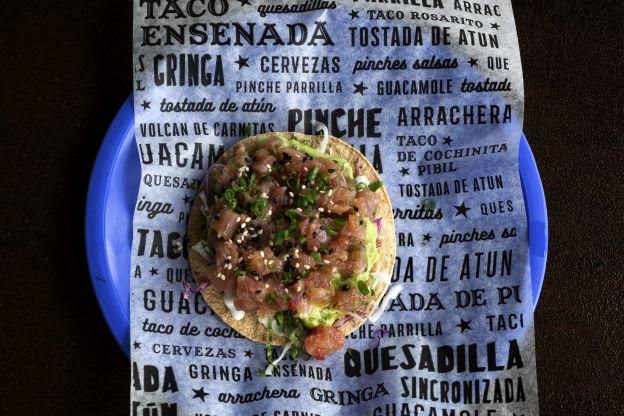 The Tostadas at Chinga Tu Taco were one of my favorites, especially the Tartar de Atun (S/. 12). This was another winner at our table. The combination of avocado cream, aioli, black and white sesame seeds, sliced cabbage, sesame oil and of course the finely chopped fresh tuna tartar with finely-sliced green onion all served on top of an ultra-crispy fried tortilla was a hit.

Another option on the tostadas menu is the Ceviche (S/. 10) which used a mild white fish (charela). We also enjoyed these tostadas due to the freshness. These tostadas are not served in traditional taquerias, but are typically served in seafood restaurants in Mexico. 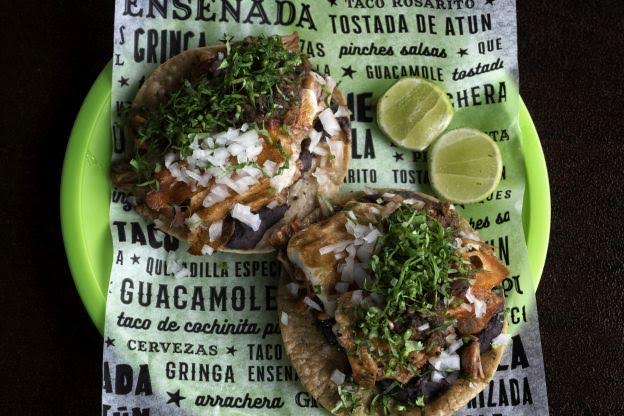 The Volcanes (S/. 8-9) are ideal for those times you may have a bigger appetite or have been out on the town and need a late night “snack” to perhaps soak up the alcohol ….we also thought they would be an ideal hangover food. There are three different fillings…beef (lomo fino), pork (cerdo) and pork loin (pastor). The corn tortilla is fried and ultra-crispy in texture. A layer of bean paste is spread onto the tortilla, your choice of filling, crumbled Oaxaca cheese (from Cajamarca), diced white onion, and minced cilantro. My favorite was the pastor. It’s a bit complicated eating these volcanes because they are messy…..but they are oh so delicious.

The Gringas range between 7-9 soles and offer four fillings (lomo fino, longaniza, pastor, cochinita) and we sampled all of them. The lomo fino (beef) was my personal favorite. The cochinita (pork) was also well executed and satisfying. Unlike the tacos, volcanes, and tostadas that use corn tortillas at Chinga Tu Taco, the “gringas” are prepared with wheat tortillas similar to the ones used in the U.S., hence the reason behind the name “gringa”.

Two sauces can be found on most of the tables to accent your dishes. One is the salsa aguacatosa, a slightly addictive and creamy avocado sauce as well as the salsa limo, a very hot and spicy sauce that should be used sparingly so you don’t overwhelm the flavor of your dishes. Most of the dishes are served with a generous amount of lime slices.

All of the corn tortillas at Chinga Tu Taco are currently prepared locally by a Mexican woman who is an expert in artisanal tortilla production, but plans are in the works for producing their own corn tortillas in order to have more control of the quality and recipe standards. 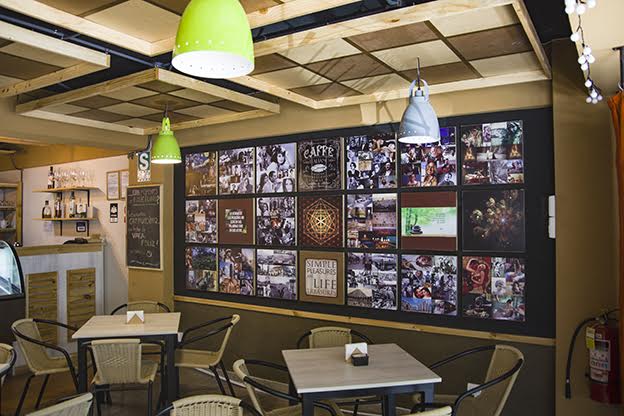 I highly suggest you try one or even two margaritas at Chinga Tu Taco. You will NOT be disappointed! Two versions are served and both are excellent. The classic tequila margarita with salt on the rim and the intriguing mezcal margarita prepared with the bright pink prickly pear fruit. The smokiness and slight sweetness of this mezcal margarita complemented each other. All of the beverages served at Chinga Tu Taco are served in tall plastic cups.

We sampled a couple of the Agua Frescas, non-alcoholic beverages, one a Tamarindo flavor and the other Flor de Jamaica. They were both very subtle in flavor.

We also sampled their Limonada which was a bit too sweet and would have benefited more with less sugar.

Besides his current restaurants, Jeronimo (opened in 2016) serving world cuisine with a touch of fusion as well as this current location of Chinga Tu Taco, there are current plans in the works to open up two more Chinga Tu Taco locations (one near Parque Kennedy and one in Barranco). The newest project will be the opening this year of the restaurant, Frida, located nearby on Av. Mendiburu. Frida will serve Mexican fare such as enchiladas, burritos, mole, etc.

Parking:  street and parking garage across the street

Recipe: How to Make Pasta with Peruvian Huancaina Sauce

6 Peruvian Fruits You Should Try...