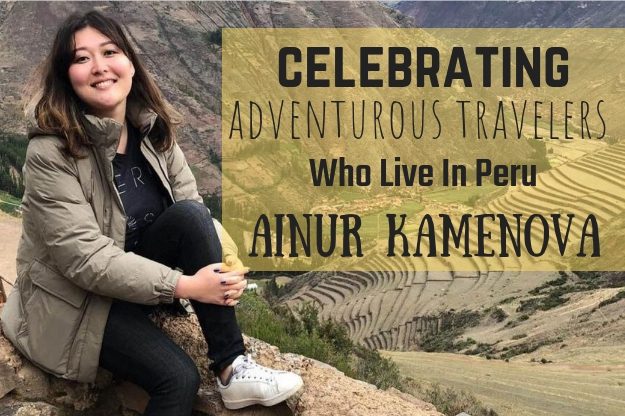 Ainur Kamenova decided to follow her heart’s calling and move to Peru. Finding her way here has not been an easy journey, but according to Kamenova, being able to call Peru her home is one of the most rewarding aspects of her life.

While studying at the university, she gets the call to come to Peru

Ainur Kamenova was born in Kokshetau, Kazakhstan. After graduation, she entered the Kazakh Humanitarian Law University with a degree in International Law.

“I graduated from high school, got a bachelor’s degree, but I couldn’t find a job. SoI decided to go back to school, choosing to pursue my masters degree in Intellectual Property at Seoul National University. After two years of living in Seoul, I firmly decided that I needed a new challenge. And so I made the choice to move to Latin America,” recalls Ainur.

“When I was in Korea, 80% of my friends were Hispanic. And I became deeply involved in their culture, history, and language. Simply put, I became obsessed with Latin America.”

What would inspire somebody to move from Khazakistan to Peru?

Although the roots are, as usual, from childhood: the influence of soap operas, “cha-cha-cha” dances, the rumba in which the music was engaging. I became good friends with a Colombian family in Seoul. Aside from being great companions, I liked their food and accents – the pronunciation of the Spanish language varies in Latin American countries.

My parents’ concerns also played a role. They demanded that: “ You will go only to the country where you have friends and acquaintances.” Thankfully, my closest friend, roommate, and classmate while in Korea was a Peruvian.

In Lima, Kazakhstan starting working as an English teacher at a children’s language school. According to her, another job without knowledge of the language in Peru would have been difficult to find.

Cultural differences in a new country

“Upon arrival, my Spanish was basic. I lived in my friend’s house with her family. In general, adapting to the new country was easy. Peruvians are friendly. I have never seen a single scandal. Even in poor areas, people are smiling and very polite. I think we should adopt our attitude towards life from them, ”

At the same time, Ainur notes that Peru has a high crime rate.

“The crime rate is high due to the presence of thieves: you can not shine the phone and shake bills on the street and in buses. But the thieves are very friendly, as paradoxical as it may sound. They do not aim to kill someone or hurt, they just need your money and mobile.”Although if you show aggression, they can shoot. But, as a rule, no one ever resists.

I’ve loved Peru, except for the time that I got robbed

It was late in the evening with friends down the street, and here a guy came up to us with open arms and said: “Amigos!” (translated from Spanish as “friends”).

I immediately saw through him and managed to dodge, and my friend left without a penny in his pocket.

Ainur Kamenova says that the poverty level in Peru is higher than in Kazakhstan since about half of the population is below the poverty line.

A version of this article previously appeared on Nur.kz

How to Experience Peru From Your Home (Updated)