Home Culture The Virgen de Carmen Festival: the Dancers and their Stories
CultureCusco

The Virgen de Carmen Festival: the Dancers and their Stories 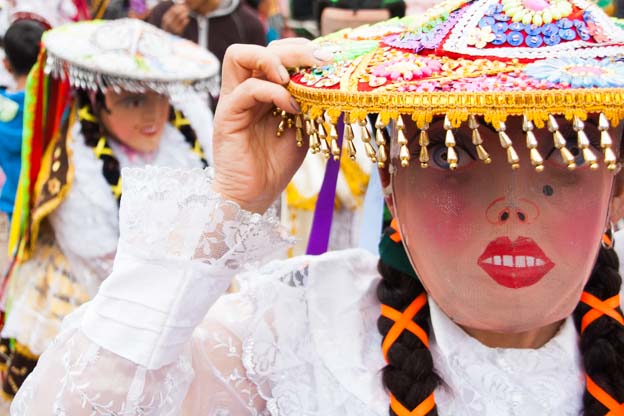 The Virgen de Carmen Festival, taking place between July 15-17 in towns near Cusco is a not-to-miss traditional event. I interviewed dancers from various groups about why they dance, and the history of their dances.

The roots of this event run much deeper than Catholocism

The festival of the Virgin of Carmen is typically understood to be a Catholic event, celebrating the Virgin of Carmen, another name given to the Virgen Mary by the Carmelites of present-day Israel in the 13th century. Myself, like so many expats who have found their way to the Sacred Valley of Peru, have been called to be here in order to connect with what still remains of these ancient traditions. As one dancer for the K’achampas explained, for many people of the Andes, the festival of the Virgen of Carmen is anything but a Catholic event.

Where would dancers be without the musicians?

There are dozens of full bands that come to play at the festival. Popular instruments include harp, mandolin, fiddle, quena, drums.

Another of the groups to participate in the festival are known as The Majeños”. To find more out about this group, I interviewed the leader of the group about the tradition behind their dance.

“The majeños were businessmen who sold liquor, but they come from a town that is called ‘Majes’ in Arequipa. They came to Cusco with their liquor, with their pisco (a type of alcohol) to do business; businessmen who came on horseback. So we have their dress with a leather jacket, sombrero, chaps and pants that are typical. With thick belts, shawls, and boots. And the mask [with a large nose like Pinocchio], that satirizes the majeños, no?”

Wayna Sacra is a type of dance that is unique to the community of Pisac. According to tradition, the Wayna Sacra are young female devils who, with their dance moves and dress, try to tempt the most faithful Catholics into sin. In our interview, the dancers explained why they participate in the dance.

We like to dance. We have a devotion to the Virgin, therefore we dance. Most of us have already been doing this for 6 years, 7 years.

As I mentioned, there are at least a dozen different dance groups. Here photos and descriptions of just a few of the others who participated in the festival.

The Sillkas are all about parody. In this dance, with origins in the colonial period, the participants satirize the corrupt colonial judges and the unjust legal system against indigenous people.

The Qhapaq Negro are dancers who represent enslaved Africans at the hands of European powers.

Are you interested in taking part in the festival? Join us for an immersive adventure at this year’s festival in Pisac. Contact me at [email protected] for more information.

Join our Patreon Community to support more content like this, and help us promote all the great things Peru has to offer!
festivalPaucartambopisacvirgin de carmen
FacebookTwitterWhatsappEmail

Where to Eat Chancho al Palo...

Ten Reasons to Love Living alongside...