Several years ago when I traveled to the jungles to do my first plant medicine diet, I intended to be in silence and isolation. Instead, I found myself as the only gringo in a sleepy indigenous community that was not used to having foreign visitors. At first, the children would stand from a distance and shyly stare at me with curiosity. But once I took out the markers, paper, and pens, my shaman’s maloka floor became the unexpected place for daily impromptu art sessions.

For the entire three week diet, during which time I slept on a hammock inside of my 100-year-old shaman’s termite infested and teetering maloka, I was constantly visited by village children. It’s been through seemingly insignificant experiences of sharing through art, that I’ve found some of the greatest insights of living in Peru.

But instead of delving into any details at this time, it would be best to leave the story telling to some of the children, through their art.

A few of local children who joined me in the afternoons for our art afternoons:

Juan’s daugher in-law Adriana and her daughters, Enith (on her left) and Jamelia (on her right), along with relatives Freddy and Ani while they sit with me in the maloka and draw pictures. In the drawing on the left, done by Fredy, is the face of a Shipibo curandero over-top the sacred ayahuasca leaf. In the drawing on the right, done by Eni, is Juan’s maloka where I was living, and where he does his ceremonies. Through the open door in the middle of the maloka, is a figure (meant to be me), sleeping in my hammock — just as I had been doing when they came into the maloka and woke me up so that we could do some art.

Another drawing done by Freddy of a shaman in the middle of a ceremony, healing a woman while he smokes mapacho (a type of tobacco smoked in the amazon) in a pipe. At their feet is a bottle of ayahuasca, a bottle of floral water (of many uses in healing ceremonies), and a vomit bucket for the infamous “purge” brought on by ayahuasca.

When I suggested that Enith draw her dream house in paradise, this is what she drew. Having grown up in the jungle, she has never really seen mountains with her own eyes.

I love Eni’s drawing of her community because it’s so full of life, details — a butterfly, different species of bird, a farm with yuca plants and banana trees, traditional huts, a boat along the river Ukalyli, a fish, and of course a radient sun. 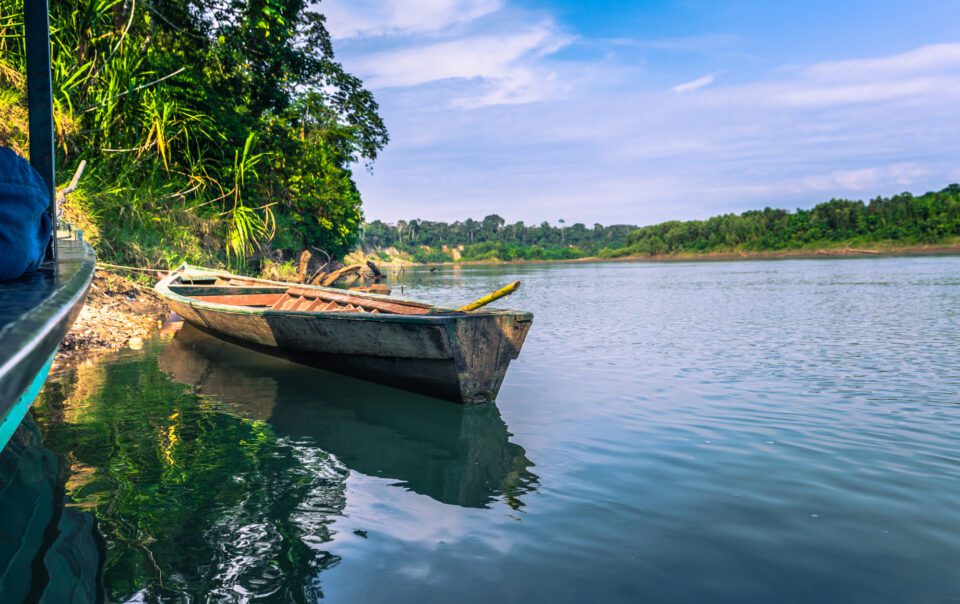 Storytelling and Art with Shipibo Youth in the Jungles of Peru