Top Stories
Ancient Inca Artifacts Found Underground by Lima Gas...
This is Why the Maras Salt Mines of...
11 Reasons Why Traveling To Peru is Good...
Is Machu Picchu Kid Friendly?
La Pasta Co. 1704 Serves Up Fresh Pasta...
These Are the Best Destinations For Birdwatching in...
10 Peruvian Drinks You Must Try
The History of Pachacamac—and the Stick that May...
Inkaterra Hacienda Urubamba: A Luxury Eco-Lodge Full of...
New Peru-Australia Free Trade Agreement 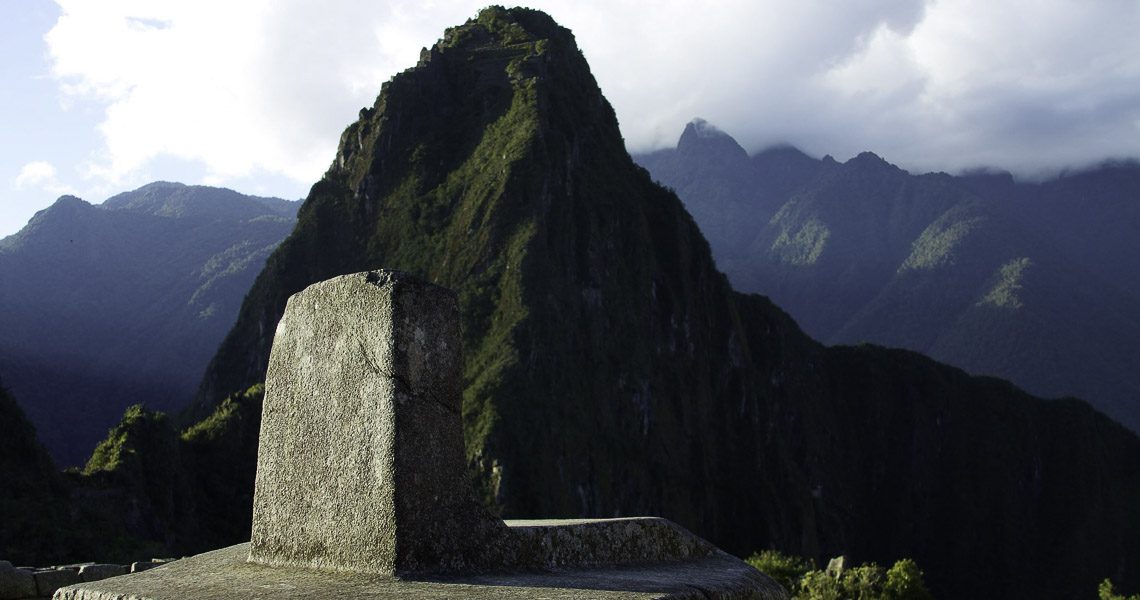 The region of Cusco is so packed with ruins that at first glance, it might not seem so magnificent: another sculpted stone. But Inca sun clocks, known as Intihuatana, were one of the most important Inca creations, which allowed them to make sense of the cosmos and to use this knowledge to structure an entire society.

“For ancient Andean people, astronomical observation was essential to how they framed their world view, and was useful for organizing the social and economic life of the people. Hence the creations of sun clocks, through which people were able to make accurate observatories of the sun and its course through the sky. Through these Intihuatanas, Andean people tied their lives (symbolically) to the seasons generated by the movement of the sun during the year”

Where you can find them

Since the Spanish were quick to destroy Intihuatanas that they found, there are not as many as there used to be. But you can find them spread across the Sacred Valley, in ruins near the towns of Pisac, and Ollantaytambo. There are also Inti Huatanas located near Cusco at the ruins of Sacsayhuaman, Q’enqo, and the temple of the moon. But the most popular of them all is at Machu Picchu, which was found by Harim Bingham in 1911.

How many meanings can come from a name?

We can look at the linguistics of the word Inti Huatana to get a deeper sense of what they meant for the Inca. Most people refer to them sun clocks, but there is much more meaning behind them than most people realize. The first part of the translation is easy. In Quechua, Inti means sun. But for the next part of the word, things get more complicated because of the many possible ways to make sense of the word Huatana. The word wata in Quechua means year. But there are also other possible meanings including watay, to tie down; watuchiq which means to make divinations or predictions; and watukuq which means to ask or inquire.

The most interesting way that people translate Inti Huatana is “the place where they tie down the sun.” And though this may seem strange and confusing for some, if we look into the Inca cosmology, we see that many people literally believed that this is what the function of the clock was: to bring it back to earth, and to keep it from escaping; to bring the wisdom of the heavens into life on this plane.

Intihuatana and the Chakana

Sun clocks were what helped prehistoric people of the Americas to make observations, and it’s what inspired a pan-Andean phenomenon, sacred geometry collectively expressed in the pan Andean chakana, cosmic cross. By studying the cosmos with the sun clock, it inspired ancient people of the Americas to frame their perspective of the cosmos between the four cardinal points, just as is is explained by Jesus Rios Mencia:

Or as Florencio Pedro Huamani explains

“Intihuatanas served as a conceptual basis for the development of the Andean cosmovision, religion, social organization, the planning of the economy, the conservation of natural equilibrium and the design of the sacred geometry that is synthesized in the chakana or Andean cross.”

Join our Patreon Community to support more content like this, and help us promote all the great things Peru has to offer!
archaeologyIncaMachu Picchu
FacebookTwitterWhatsappEmail

Magical Act at Qoyurriti: The Ancient Andean Ritual of...

Tiles in the jungle: Thoughts and Reflections on Architecture...