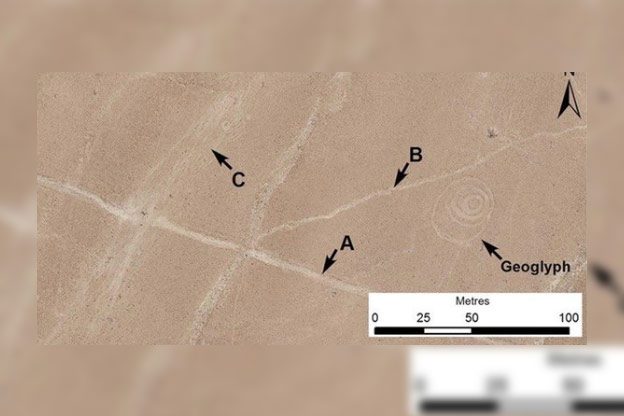 According to the newspaper La Voz, ancient travelers were probably the authors of enormous mysterious circles drawn in the desert terrain on southern Peru.

“They were probably made as offerings during their breaks”, they suggest as a theory.
New research proves that circular geoglyphs are located along old transport routes. The marks may have been made for many centuries, from the year 200 to 1,400 of our era, published Europa Press, according to the aforementioned media.

Justin Jennings, curator of New World archeology at the Royal Ontario Museum in Toronto told the media about his team’s recent work on the Sihuas Valley in southern Peru, where they analyzed the markings on the ground.

“The researchers used a combination of field work, unmanned aerial imagery and satellite imagery to accurately map the location of ancient footpaths and circular geoglyphs, ranging in size from 3 to 55 meters in diameter”, La Voz explained.
The experts also informed about how easy it is to make these geoglyphs. All people had to do was to remove rocks and soil from the reddish-brown top layer to expose a lighter layer of sediment below the surface.
The geoglyphs look something like the famous Nazca Lines, also in southern Peru, which were also made by separating the upper sediment. But the Nazca Lines are much more complicated than the circles of Peru, since they represent animals and other figures, and are much larger in size.
In the Sihuas Valley, geoglyphs shaped like a ring were the most common, but there were also geoglyphs made of two or three concentric circles. In addition, Jennings believes that the geoglyphs were located often in what he called “turning points,” where the road or view changed. They were particularly frequent in places where the trails reached 800 meters from the valleys to the flat landscape of the “pampa”.

Native Rodent to the Machu Picchu Area Reemerges During...

Machu Picchu Under Maintenance During Coronavirus State of Emergency

Is LATAM Having a Secret Sale on Flights to...

Native Rodent to the Machu Picchu...

Pachacamac: Empowering Locals to Preserve the...

Sandboarding in Huacachina, a Desert Oasis