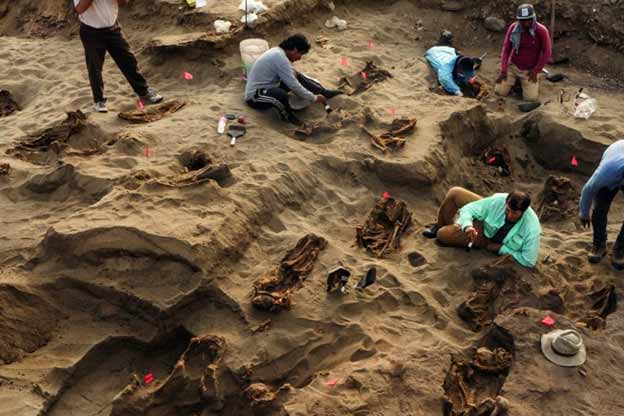 A new archaeological discovery surprised the team of researchers who for eight years studied the vestiges of the Chimú civilization in the district La Libertad in Huanchaco. This time, 132 remains of children and 260 young llamas that were found in Pampa La Cruz.

“This discovery is in addition to the discovery of the remains of 137 children and 206 young llamas in the area of ​​Huanchaquito-Las Llamas (1.5 kilometers from Pampa La Cruz), which was presented in April 2018 and is considered, to date, the largest mass sacrifice of children in America, and probably in world history, according to National Geographic”, El Comercio informed today.

Experts believe that these archaeological findings correspond to an event that took place between the years 1,200 to 1,520. “This shows us that even with the Inca conquest, the Chimú continued with human sacrifices”, El Comercio said.

According to the archaeologist Gabriel Prieto, these findings have a uniqueness in terms of textiles, since they have been found in good conditions.
“The extraordinary thing is that we have found a set of ten tombs and apparently children of the Chimú elite because they were buried with artifacts and painted dresses”, said Prieto.
He also revealed that all over the world evidence of sacrifices have been found, but none as massive and evident as the Chimú culture in Peru.

Join our Patreon Community to support more content like this, and help us promote all the great things Peru has to offer!
archaeological findsarchaeologychimuchimu civilizationmass sacrificesacrifice
FacebookTwitterWhatsappEmail

Ten Things to Do in Trujillo