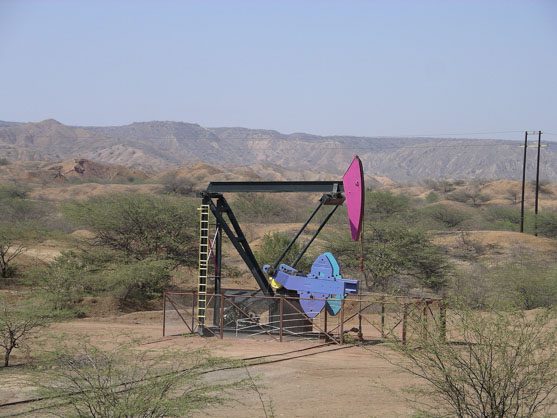 The Peruvian government is set to announce a new operator for an oil concession that sits in the basins of the Pastaza, Corrientes and Tigre rivers, in the country’s Amazon region. Indigenous communities living in the affected area must be consulted because their territorial rights will be affected by a new oil contract for Block 192.

These communities are continuing to demand that the Peruvian government fulfill its obligation to clean up the 32 highest-priority spill sites affected by earlier oil exploration and extraction activities that date back to the 1970s. Among their demands are that the government provide specialist medical services, clean drinking water, and publish the full results from a health study carried out in 2016, which showed excessive levels of toxic heavy metals in the blood of community members.

Walking through the tropical forest undergrowth in the Amazonian heat, Elmer Hualinga suddenly stops to observe how tree roots have grown around a rusty barrel. Close by, the remains of an engine lie partially buried, not far from the rusty door of a pickup truck.

This forest was once virgin territory. Following exploration and oil production that began in the 1970s under the name 1AB, the area around this village of wooden houses and unpaved roads became a waste dump. Here, and in 31 other sites inside the Block 192 oil concession, a cleanup operation is now set to take place.

Hualinga is 36 years old and has three children. He continues to be concerned about the long-term impact of the nearly five decades of pollution on the streams, rivers, plants, fish and animals that his family and indigenous communities depend on for their survival.

Next, he stops beside a small, murky pool of water. “The smell of this place isn’t natural. It’s a horrible smell, the smell of decomposing metals.”

Footprints in the mud show that animals are being drawn to the salty water of the polluted pool, just as they are attracted to the natural colpas (salt licks) in the Amazon. But this salt comes from the residue of oil extraction.

“This is the souvenir left behind for us by the oil companies,” Hualinga says.

A new plan for an old oil field

At the start of 2019, the Peruvian government announced it would assign a new operator for Block 192, an oil concession that covers some 4,900 square kilometers (1,900 square miles) in the river basins of the Pastaza, Corrientes and Tigre, located in northern Peru near the border with Ecuador. The area is mainly inhabited by the indigenous groups of the Achuar, Kichwar, Quechua and Urarina people.

According to the Ministry for Energy and Mines, the new 40-year contract will run for 40 years. In accordance with Peruvian legislation, the indigenous communities whose territorial rights will be affected by the new contract will participate in an initial four-month consultation process.

Four indigenous federations known collectively as the “four basins” — FEDIQUEP from Pastaza, FECONACOS from Corrientes, OPIKAFPE from Tigre and ACODECOSPAT from Marañón, which is supporting three areas within Block 192 — delivered a proposal to develop the initial consultation to the Ministry of Energy and Mines on Jan. 17.

Indigenous organizations have spent more than a decade fighting for polluted areas to be cleaned up and for medical services to be made available for the people living in the country’s largest oil fields. However, concerns over the industry’s impacts on human health and the environment as well as money for future cleanups remain strong.

The indigenous organizations are demanding that the meetings to develop the consultation plan, as well as those for the consultation itself, take place within the communities in the block to allow the inhabitants to participate. They also propose that the contract model be formalized and that this process detail factors including environmental management, benefits for the communities, and the cleanup of damage.

Health is a key theme for the consultation, according to leaders of the “four basins,” a reference to the three tributaries to the Marañón River located within the concession. The Marañón joins the Ucayali downriver to feed into the Amazon.

The indigenous organizations are demanding specialist medical services for people who have heavy metals in their bodies, clean water for drinking and cooking, a guarantee of food safety, and that the full results of a health study carried out by the National Center for Occupational Health and Environmental Protection (CENSOPAS) are made public. During the study, conducted in 2016, urine and blood samples were taken, surveys were carried out and further samples of the soil, water, air and food were collected. To date, only partial results have been published.

Those results included findings that some people had levels of cadmium and lead in their urine and blood that exceed the permitted thresholds. Also the presence of barium and lead in the floors of some houses and soil in some fields was discovered in levels higher than environmental quality standards.

The National Ombudsman’s Indigenous People Program referred to these health issues in a report published October 2018, which recommended that the government ensure financing to complete the health study, as well as monitoring people found with heavy metals exceeding the maximum permitted levels. They also requested the development and coverage of a health plan for the affected communities.

Another demand made by the indigenous communities centers around the cleanup of the pollution that has accumulated over the course of five decades. Most of the time, the water produced from the region’s oil wells — hot, salty and packed with metals — was discarded untreated into the rivers and streams.

They now hope that consultants, who are developing cleanup plans for the 32 sites identified by the indigenous organizations as the highest priorities, will finish their work in 2019.

Repeated conflicts over the cleanup

An earlier study financed by the Peruvian government, coordinated by the United Nations Development Programme (UNDP) and published in August 2018, revealed the complex nature of oil spill cleanup as well as the potential cost.

The initial fund of around $15 million has been nearly exhausted. The Ministry for Energy and Mines has earmarked around $53 million from its 2019 budget for cleaning up areas contaminated by oil, but the total cost for cleaning all the prioritized locations could be much higher — and this is just a fraction of all the contaminated sites.

The UNDP study recommended prioritizing future cleanup sites based on a risk assessment for human health and the environment. A similar study is planned for 2019 in the neighboring Block 8, another oil block from the same era, also contaminated by spills and waste.

The indigenous organizations are asking for the pipe network in Block 192 to be replaced, together with the oil pipeline in northern Peru that transports crude from the Amazon through the Andes to the Pacific coast.

Frequent oil spillages have been registered within these areas, according to the UNDP study. The Amazonian section of the northern oil pipeline has also suffered a series of spillages since 2014, due variously to changes in the soil, corrosion, and vandalism.

A series of leaks in 2016 caused concern about the state and safety of the pipe. State-owned oil company Petroperú attributed the majority of the spillages to sabotage, although it has never identified those responsible.

An investigation by Congress into these oil spills also could not identify those responsible for the vandalism, but they observed that a number of smaller contractors had suddenly been awarded public contracts worth hundreds of thousands or millions of dollars.

According to Alicia Abanto, who supervises environmental affairs, public services and indigenous affairs for the Ombudsman, the spills are due to “a combination of factors,” and the conflicts relating to the pipelines “are very complex phenomena.”

This complexity is demonstrated in the situation of the Wampis community of Mayuriaga, which suffered a spill in February 2016 and again on Nov. 27, 2018. According to community members, Petroperú told them that the first spill was due to abrasion on the pipe caused by sandy soil, but blamed the 2018 event on vandals. Community members refused to let Pertroperú settle the matter, saying the company had not fulfilled their 2016 agreement. The negotiations continue.

For Elmer Hualinga, who has worked for 10 years as a voluntary environmental monitor in Nuevo Andoas, health continues to be the main concern as the communities prepare for the consultation process.

The health study also showed children have levels of heavy metals in their blood and urine exceeding the regulatory thresholds. The health workers told him his 7-year-old daughter was at grave risk.

“What can I do as her father to ensure she doesn’t have these metals in her body?” he asks.

This article originally appeared in Spanish at Mongabay-Latam on February 7, 2019, here.

Translated from Spanish by Claire Storey

Attending Mass in Quechua with Viacha...