A new chapter of Places of Peru begins as we explore the often overlooked region of the Alley of Huaylas in Ancash.

The Alley of Huaylas (Callejon de Huaylas) is a region in which Peru’s beauty and struggles are magnified, a place which tells its own personal story amidst the greater story of the Andean country.
The region is named and defined by its physical geography.  A valley carved by the Santa River (the “alley”) runs between 2 distinct mountain ranges on either side.
On one side is the Cordillera Blanca which contains Peru’s highest mountains, snow peaked giants such as Mt. Huascarán in Yungay.  The beautiful glaciers that cap the mountaintops provide the region with water and therefore, life.  They also attract mountain climbers from around the world looking for new challenges.  This mountain range feeds the Santa River with its many tributaries.
On the other side is the Cordillera Negra, the black range.  This range only supports a few sporadic villages because of limited water resources.  It is lower than the Cordillera Blanca but offers some of the most spectacular panoramas found in all of South America.
Let’s begin on the Climate Change Trail near the southernmost and highest part of the alley.  We are on our way into the Cordillera Blanca to see one of Peru’s most accessible and most endangered glaciers: Pastoruri.
[Best_Wordpress_Gallery id=”136″ gal_title=”Ancash1″]
From here, we will head north to Huaraz, the capital city of Ancash department, another complicated place where natural beauty and tourism opportunity meets climate change realities. 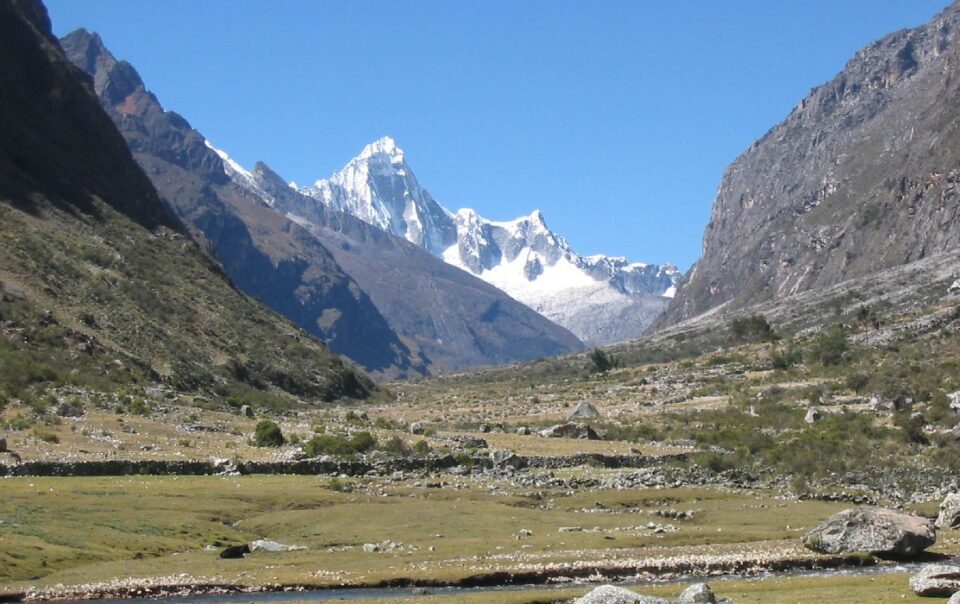 Trekking and Camping in the Mountains of Ancash, Peru