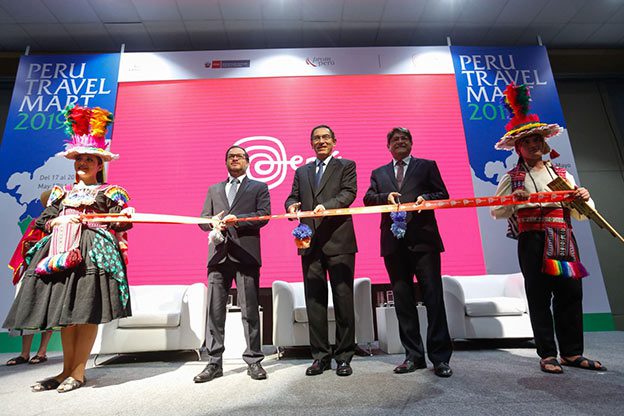 Martín Vizcarra, President of Peru inaugurated last Saturday, May 18, the 26th edition of Peru Travel Mart 2019 (PTM 2019), the main tourist negotiation exchange in the country, organized by the Commission for the Promotion of Peru for Exports and Tourism (Promperú) and the National Chamber of Tourism (Canatur).

“Tourism is one of the main economic activities of our country and our Government gives great importance to this sector that has a lot of potential and benefits millions of Peruvian families, empowers the female workforce and boosts regional economies,” said the chief of State, according to a press release.

This event is seeking to close deals for more than $25 million US dollars for the next 12 months with interested entrepreneurs and companies, such as hotels, tour operators, airlines, cruises, and more.

“From the Ministry of Foreign Trade and Tourism (Mincetur) we have been working hand in hand with the private sector to boost the increase in foreign exchange generated by international arrivals, offering quality services, promoting formality, improving infrastructure and air connectivity,” Edgar Vásquez, head of Mincetur said.

This year, Peru Travel Mart will have 163 buyers from 27 countries, a figure that represents an increase of 30% to the participation of 2018, according to the press release.

Join our Patreon Community to support more content like this, and help us promote all the great things Peru has to offer!
Peru Travel Marttravel mart
FacebookTwitterWhatsappEmail

Peru And Malaysia Signed A Tourism...