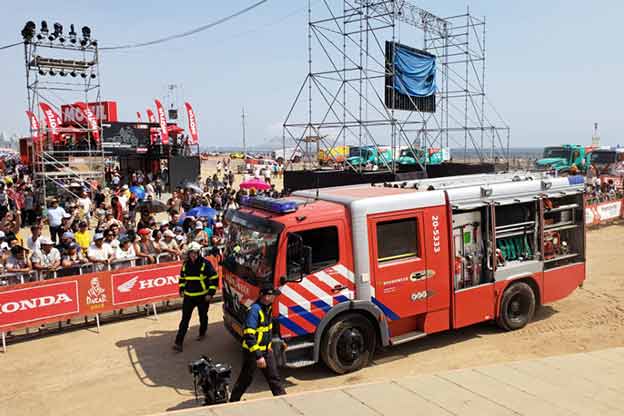 The Dutch team Firemen Dakarteam, a participant of the Dakar Rally 2019, donated a fire truck, special suits and implements for the General Corps of Volunteer Firefighters of Peru (CGBVP).

The truck consists of a multipurpose unit that, in addition to the control and extinction of fires, allows the rescue of people. The Minister of Foreign Trade and Tourism, Edgar Vásquez, said that this truck will be sent to the Fire Company No. 43 of the city of Pisco, Ica region.

“I would like to thank, on behalf of the government, this gesture of solidarity with the Peruvian volunteer firefighters, made by a team of firefighters that will participate in the Dakar Rally,” said Mincetur.

The Firemen Dakarteam team donated another fire truck in 2018 that was delivered to the Fire Company Nuestra Senora de las Mercedes in Pisco, Ica.

Join our Patreon Community to support more content like this, and help us promote all the great things Peru has to offer!
DakarDakar Rallydonationfire truckfiremen dakarteamrally
FacebookTwitterWhatsappEmail