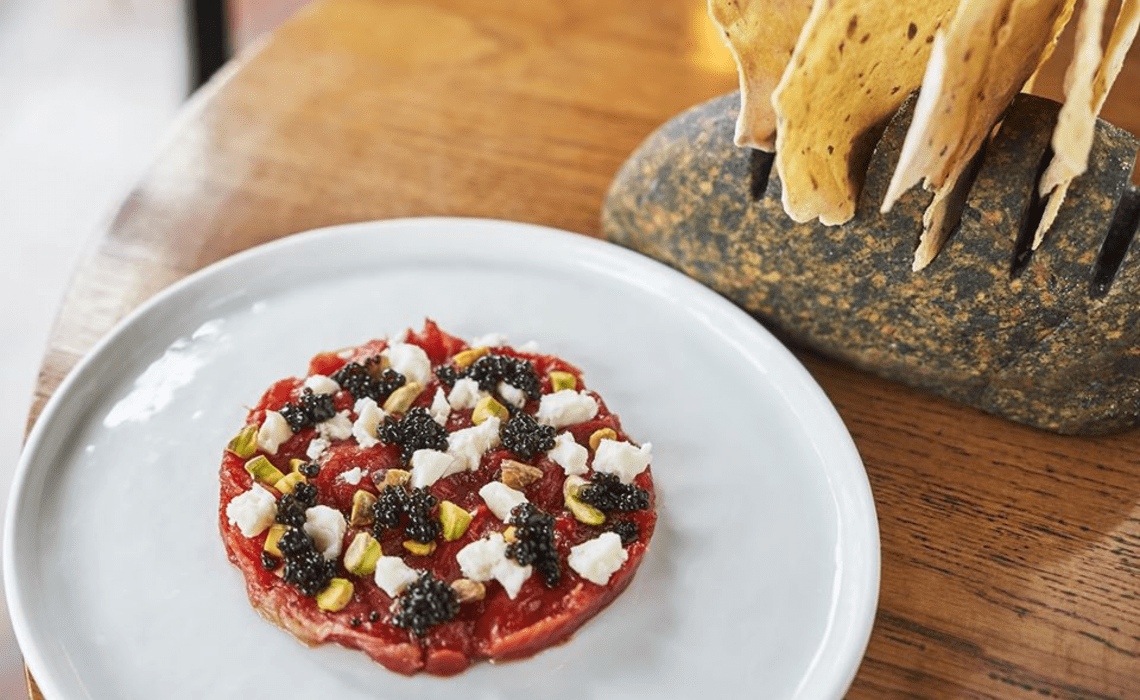 With a Peruvian flair and plenty of surprises, 27 Tapas is not your ordinary tapas restaurant. Where else can you try almond tiger’s milk?

As the name suggests, 27 Tapas is a tapas restaurant serving traditional Spanish tapas but with a definite Peruvian flair. It is situated right next to the classic San Isidro restaurant, Lima 27.

As you enter the restaurant you walk straight into the well stocked bar. Here you will find all the usual drinks, but their specialty is unusually presented cocktails. Our choices tonight were no exception. The Chasqui Bag (S/32) is their newest cocktail. Basically a cocktail of pisco and lime shaken with crushed ice, it is presented in a chasqui bag and is described as a homage to the traditions of the chasqui message runners of the Incas who carried these small personal bags. Each bag is woven in a traditional Inca pattern. A further nod to tradition is the smoke of the purifying palo santo, an aromatic stick set alight just before you receive the cocktail.

Our second cocktail was the Pineapple Garden (S/32), a mixture of fermented pineapple cider, corn syrup, coffee grounds and herbs also shaken with crushed ice and beautifully decorated with nasturtiums and mint. The herbs all come from their own herb garden growing in front of the building.

Sipping our cocktails, it was time to enjoy our gluten free tapas. Ceviche Almendrado (S/32) was made with the catch of the day. I’m afraid to admit in Peru that I’m not usually a big fan of ceviche. However this one I did enjoy. The almond tiger’s milk was different to the normal tiger’s milk you usually get with ceviche. It was subtle but still quite limey. It was served with tiny cubes of roasted avocado and slivered almonds giving the whole dish a more interesting texture. Served on a bed of crushed ice it was nicely chilled.

27 Tapa’s Tortilla española (S/30) was a surprise. We have eaten this many times in Spain where it is usually cooked slowly for a very long time until it is quite dry. This was cooked much less so was quite moist and the other flavors such as the soft onion all blended together pleasantly.

Next we enjoyed Carpaccio de Sandia (S/18)–watermelon carpaccio. Yes, carpaccio is usually raw meat or fish but this is a refreshing summer version of roasted, thinly sliced watermelon that has been marinated in balsamic vinegar. Balsamic vinegar is one of the vinegars that can be eaten by someone on a gluten free diet. It was garnished with small cubes of feta cheese and sprouts from their garden. Served with thin slices of warmed gluten free lavosh style bread that was presented in a fun slotted rock.

Conchas brasas (S/22) was the dish I wished was not just served as a tapa, as they were so good I could have eaten a whole plate full! Bathed in spicy Peruvian chili butter, the scallops were cooked perfectly and delicious.

Our last tapa, and definitely the most filling, was Cacio e Pepe (S/28)– Parmesan risotto served with truffled egg yolk, mushrooms and erizo. If you try to translate erizo you will probably get hedgehog! Erizo de mar are actually sea urchins which are a delicacy in Spain and also found in the San Juan de Marcona area off the coast of Peru. The risotto was topped with light foam. Both being cheese addicts, my husband and I would have preferred a stronger cheese flavor in this dish, and the rice cooked a little softer.

During our meal we were treated to an energetic violin duo playing popular classics. Beginning at 9:30pm on Saturday nights there is live music alternating between jazz and popular classics, depending on the band playing that week. It is wise to go a bit early as it is popular and the restaurant soon fills.

There are only six choices of gluten free meals on the menu and not a single gluten free dessert option. We were happy with our choices but a bit distracted by some of the other creatively presented dishes as they were carried past. Obviously there were plenty of choices for the non-gluten free diners.

Note: There is a set menu for lunch with five choices for each course and three deserts. (S/49) This is different to the menu reviewed.

Join our Patreon Community to support more content like this, and help us promote all the great things Peru has to offer!
27 tapaseating in limaeating in peruFoodfood featuresgluten freegluten free in perugluten free restaurantsrestaurantRestaurant Reviewrestaurants in limarestaurants in peru
FacebookTwitterWhatsappEmail