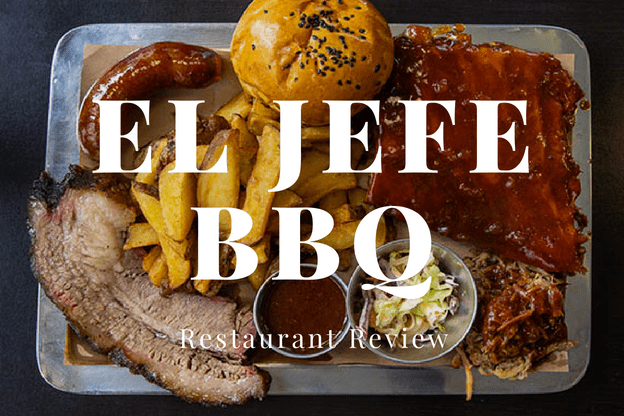 Open since January of this year, El Jefe Smoked BBQ has quickly become a favorite among lovers of smoked meat. The big draw is their tasty barbecue options, including beef brisket, pork ribs, chicken wings, pulled pork, and sausage.

I was very curious to check out El Jefe because a friend of mine, who is a chef, had been raving about this place and returned on several occasions.

As we walked into the funky, narrow and rustic premises, the wonderful aroma of smoked meats provoked our appetites.
In the U.S., we have a few areas that are known for their barbecue: Texas; Memphis, Tennessee; North and South Carolina; and Kansas City, Kansas. Each has its own favored meats, wood for smoking, and their style of sauce. I am a fan of barbecue from these various places. Whenever I am back for a visit to the U.S., I always try to eat barbecue a couple of times.
A few months ago I visited Luling, Texas where I enjoyed brisket, pork ribs, and sausages at City Market BBQ. Although it was not exactly the same barbecue I have eaten in popular areas of the U.S., the barbecue we ate on the day of our visit to El Jefe here in Miraflores was pretty good. Keep in mind we are in Lima, and El Jefe did not disappoint! 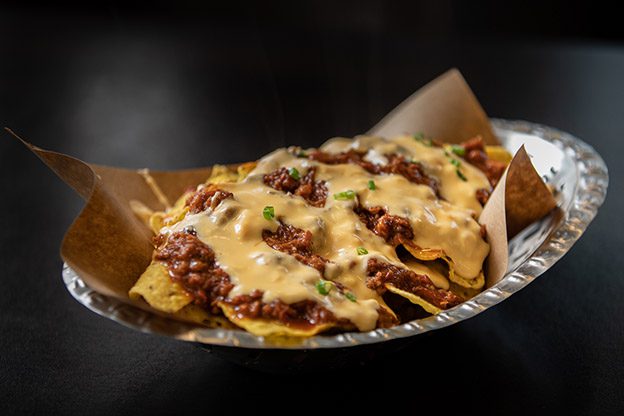 We began with one of their popular starters, the Chili and Cheese Nachos (S/.25). The chili on top of the nacho chips was fantastic! So much so, that I almost ordered a portion of the chili to bring home with me.
They prepare their chili with high-quality beef brisket meat along with other “secret” ingredients. The chili was slightly sweet and salty and had a zesty, unabashed seasoning and spicy kick to it. The dish also came with a generous portion of cheddar cheese sauce drizzled on top. This was a great way to start our meal and I found this to be one of the most decadent chili and cheese nachos I had eaten in a long time.
We followed up with an order of chicken wings. You can select three of the BBQ Chicken Wings and three of the Hot BBQ Chicken Wings; either way, it’s 15 soles for six wings. The wings are marinated for 48 hours, smoked for approximately 3 hours, fried, and then the barbecue sauce goes on last. We found the wings to be decent and they had the perfect amount of “dew” (sauce) on them. 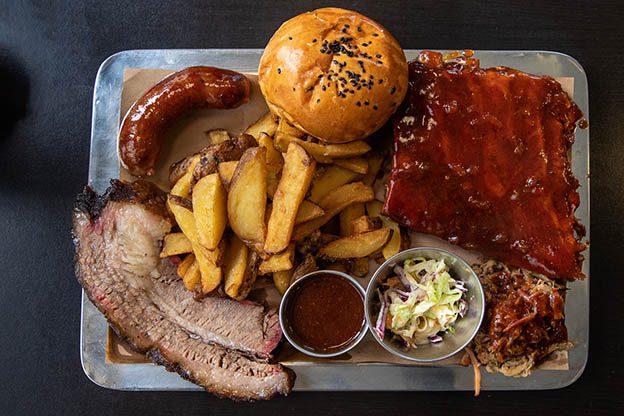 The three of us then shared their Bandeja Personal (S/.55), which included a tray with a large cut of the brisket, a smoked sausage, a quarter slab of pork ribs, a portion of pulled pork, a brioche bun, coleslaw, and your choice of a side dish—ours were the French fries—all arriving on a large stainless steel tray. Even though it is shown as a dish for one person, it was easily shared between the three of us. This is one of their most popular dishes and is usually shared by two people. There are two other “bandeja” platters or trays available to feed larger groups of diners. Please note that the “bandeja” for two people can easily be shared between four diners.
Many people here in Lima are probably not too familiar with beef brisket. The brisket is a fatter cut of meat from the breast or lower chest of the beef. The brisket is tenderized when the collagen gelatinizes, which results in a more tender brisket. The fat cap, which is attached to the brisket, helps to keep the meat from drying during the long smoking process.
People who aren’t familiar with this cut of beef may wonder why there is a large amount of fat. Brisket is supposed to have fat, that’s what makes it so delicious! Brisket is synonymous with Texas culture. El Jefe uses Angus beef brisket and it is smoked from anywhere between 12 to 16 hours; we found ours to be very tender and full of flavor.
The ribs used at El Jefe are St. Louis-style pork ribs, which are typically spare ribs. These ribs are meatier and have a higher fat content than baby back (loin back) ribs. The ribs here are smoked for approximately 6 to 8 hours. I enjoyed the texture of these ribs as the meat was ultra-tender and fell off the bone when you touched it with your fork.
The pulled pork was excellent as well. El Jefe uses pork shoulder and smokes it between 8 to 10 hours.
The French fries were decent, but we felt they could have been cooked longer and would have been better if they were crispier.
El Jefe uses Peruvian chorizo. Unfortunately, our least favorite item on the tray was the sausage. It appeared to be juicy on the outside, but we found it to be a bit dry in texture when we tasted it. 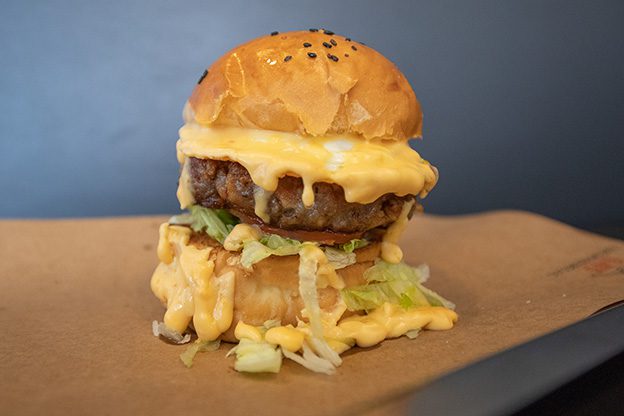 We wanted to try one of the five burgers from their menu and we opted for their 50/50 burger (S/.38). The 50/50 is a burger patty comprised of 50% Angus beef and 50% smoked bacon. Lettuce, tomato, cheddar cheese sauce, and a fried egg accompanied the burger.
All burgers are prepared with 100% Angus beef and include your choice of a side dish. The burgers are not smoked, however, they are grilled. Our burger was full of flavor, but we felt it would have benefited from being cooked less than medium. The burgers are served with the typical condiments of ketchup and mustard, but I really enjoyed the garlic mayonnaise that is prepared on the premises.
El Jefe offers a small selection of Peruvian imported and craft beer as well as modestly priced Peruvian and Italian wines.

Is El Jefe Smokehouse BBQ the best barbecue I’ve ever had? Perhaps no, but for the most part it was very satisfying and I will return in the future. There is room for some improvement, especially with newer culinary ventures like this one. I believe they are heading in the right direction and their enthusiasm and passion will only improve the food as time goes by. Many thanks to Stefano Zapatier Merino and Thalia Von Bischoffshausen for your time and patience.
El Jefe Smoked BBQ
Av. 28 de Julio 487, Miraflores
Phone: 620-2859
Capacity: 40 people

Join our Patreon Community to support more content like this, and help us promote all the great things Peru has to offer!
eating in peruEl Jefe Smoked BBQlima restaurantsrestaurants in peru
FacebookTwitterWhatsappEmail

Don Nico: The Steakhouse Lima was...