Birds of Peru: Have You Spotted the Scarlet-Bellied Mountain Tanager?

by Traveling and Living in Peru September 3, 2019 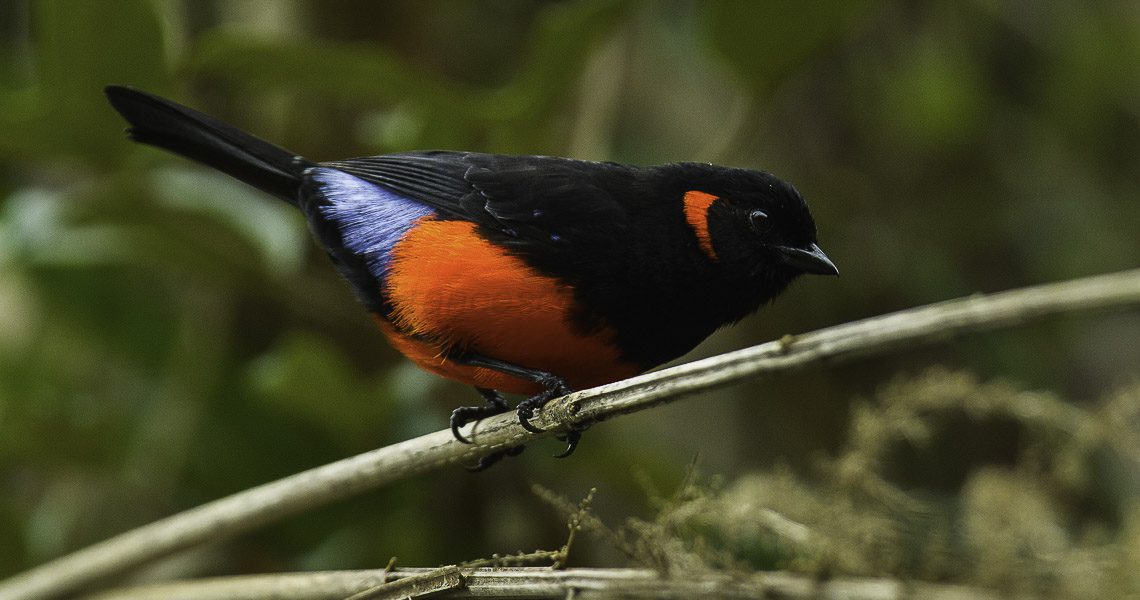 If you keep your ears open and your eyes to the sky, you might spot the Scarlet-Bellied Mountain Tanager, a brightly colored bird, in the Andes of Peru.

This beautiful bird is unmistakable for those who see it because of its plumage: an intense black on its back and orange-red on its belly. It also has a triangular patch of reddish feathers covering its ears. The tail is sky blue and the chest is orange-red. It is about the size of a sparrow, measuring about 18 centimeters in length.

Interesting facts about the bird

Scarlet-bellied mountain tanagers are usually found in small groups formed by families of up to five or more individuals. They often join groups of other thongs and finches along the edges cloud forests, where they find abundant food. Although it forages in all parts of the tree canopies, it has a marked predilection for the middle areas. The bird flies rapidly along the outer foliage of forests, often making stops to perch on thin branches in places where it finds berries or small fruits. It also has been known to hunt insects, especially those that can be found among bromeliad leaves.

The bird’s calls are a brief ‘pst pst’ of high tone. It also sounds out a song that consists of a series of trills in a moderate tone. The male usually feeds the female while she broods her nest of eggs, but does not contribute to their incubation. Interestingly, the nest almost always consists of two eggs. Both parents are responsible for nurturing the offspring, which fly from their nest after two or three weeks. You’re likely to spot this bird in open spaces and pastures with scattered shrubs or trees. It is less frequently spotted in forests.

Although this species is not in danger, three members of the family have been declared in a rare situation: the green hooded Tanager, golden loin mountain tanager, and the golden throat tanager.

This species of tanager lives in the mountainous forests and slopes of the Andes between 2,500 and 3,600 meters. It is distributed along the Andes mountain range from Venezuela to Peru.

Join our Patreon Community to support more content like this, and help us promote all the great things Peru has to offer!
flora and faunanaturewildlife
FacebookTwitterWhatsappEmail

Most Romantic Places in Lima

How to Use the Coca Leaf for Ceremony, Altitude...

Eco Surf Station: Where Sustainability and Surfing Combine in...

These Photos of Llamas Are Everything...