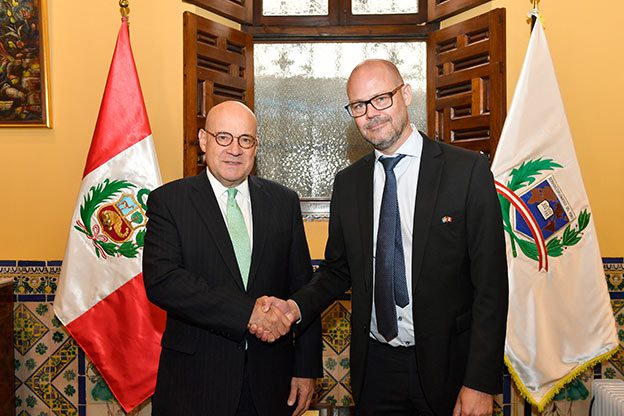 Between June 6 and 7, the Vice Minister of Foreign Trade and Promotion Niklas Johansson visited Lima and participated in the Swedish Mining Initiative, an event dedicated to promoting and positioning Sweden as a world leader in providing sustainable, innovative and safe solutions for the mining sector, organized by Business Sweden, the Swedish Office for the Promotion of Investment and Exportation, the Embassy and the College of Engineers of Peru.

The Vice Minister also had meetings with several business associations and was able to have a meeting with Peru’s minister of the Environment, Lucía Ruíz, during the celebration of the National Day of Sweden.

“Trade between our countries is growing strongly. In 2018, Peruvian exports to Sweden increased by 44% and imports from Sweden by 11%.”, Johansson said, according to the press release.

Currently, there are approximately 20 Swedish companies established in Peru and 50 Swedish brands represented by Peruvian companies. The majority is in the sector of suppliers of the mining industry but there is also a presence in the health, transport, energy and telecommunication sectors.

Join our Patreon Community to support more content like this, and help us promote all the great things Peru has to offer!
international relationsminingsweden
FacebookTwitterWhatsappEmail