Top Stories
Travel Updates: Coronavirus (COVID-19) Outbreak in Peru
Peruvian Products with Intense Flavors for Curious Foodies
I Went to Machu Picchu During COVID-19 and...
5 Things to Know About Panetón: A Peruvian...
Visiting Ayacucho? What to Know and Do for...
Zig Zag Restaurant in Arequipa: A Fusion of...
The Complete Travel Guide to Visiting Arequipa: What...
Pezcadores: Delicious seafood off the beaten path in...
Peruvian Recipe: How to Make a Warm and...
7 Attractions in the Amazonas Region of Peru...
Home Environment The Lake at Boca Manu: Safeguarding a Nature Lover’s Paradise
EnvironmentTraveling in Peru

The Lake at Boca Manu: Safeguarding a Nature Lover’s Paradise 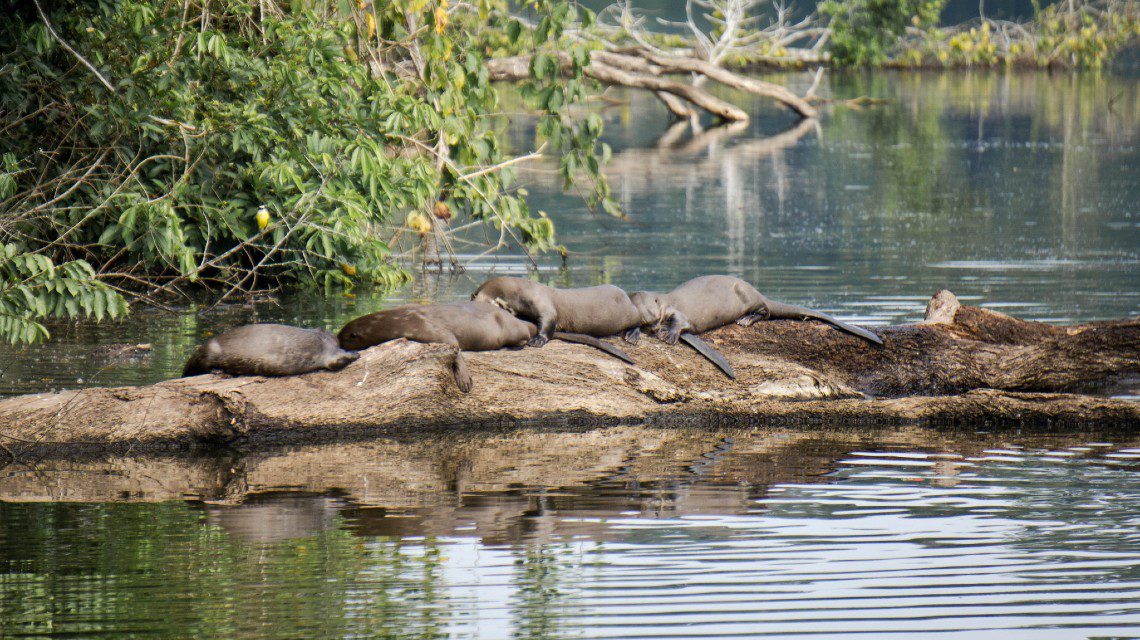 Dutch biologist and writer Jessica Groenendijk meets a local community in Boca Manu that is safeguarding the giant otter population in the area.

Angel Rojas Valles met us with a warm, welcoming smile and outstretched hand. In his other hand, he carried a plastic bag containing documents he would need to record our visit.  Dressed in shorts, singlet, and sandals, his gentle demeanor, and soft voice belied his powerful physique. After introducing myself and my two companions, Angel suggested that we get going.

We had arrived in Boca Manu half an hour earlier, after traveling two hours on the Madre de Dios River from Puerto Shipetiari. We would spend the night here and had planned to take advantage of a spare couple of hours to visit the oxbow lake, or cocha, belonging to the nearby indigenous community of Isla de Los Valles.

Cochas are the favored habitat of giant otters in southeastern Peru. Our hope was to meet the resident family, one of several we plan to monitor as part of a new, long-term giant otter research and conservation program to evaluate emerging human threats to this endangered predator, such as mercury contamination from gold mining.

Manu’s giant otter population is estimated to number mere 100-130 animals and is one of only a handful in the country.
As we walked, Angel explained that in 2015 the community had decided to set aside 3300 hectares of their land bordering Manu National Park for nature tourism and protection. Prior to this, the lake, the first of two dozen oxbows flanking the Manu River, did not have protected status and was frequented by loggers and hunters.

They had only just started organizing ecotourism excursions and he, Angel, was a member of the committee overseeing the activity. To safeguard the otters, part of the lake has been designated a no-entry refuge area and hunting near the shores has been forbidden.

We stopped at a large sign; a giant otter with two white spots on its throat decorated one corner. An arrow pointing north indicated the route to the village; a second arrow showed the way to the lake. We headed left, over a brand new and beautifully constructed bridge, and into the forest.

Within seconds, it was easy to forget that there were two communities nearby. Trees towered over us and damp leaf litter muffled our footsteps. Angel offered his hand to help me step over and along fallen branches –like negotiating an abandoned game of giant pick-up sticks.

A catamaran waited for us at the lake. We quickly boarded, unpacked our binoculars and the Birds of Peru field guide, and sat back to enjoy the ride. In the rainforest, few activities are more blissful than drifting silently over still water while absorbing the sights and sounds around you.

We floated past the grassy shore and a wattled jacana lifted into the air, its wings flashing pale yellow, its long toes trailing behind it. One of my companions spotted a raptor perched high on a dead branch.  As he murmured descriptions of its key features, I leafed through the birder’s bible and identified the species: A great black hawk.

Angel’s son, Jason, about twelve years old, came to stand behind me to look over my shoulder at the paintings of birds. I turned the pages and he pointed at a red-capped cardinal and an Amazon kingfisher. Meanwhile, a pair of chicken-sized hoatzins wheezed peevishly at us from a tangle of foliage. The lake at Boca Manu was a nature lover’s paradise.

There was no sign of the otters but that didn’t matter. Just the anticipation of seeing them, simply knowing that if I came again at another time of day I might meet them, was enough for me. Small, high twitterings from a thicket alerted us to the presence of squirrel monkeys. Above, branches swayed under the weight of a gang of brown capuchins.

It was time to head back. We left the catamaran at the shore, a hulking black shape in the gathering dusk, and returned along the trail to Boca Manu. Once there, we were invited to Angel’s house. He carefully extracted a visitor’s book and a receipt pad from his plastic bag and we each signed our names and paid the modest entrance fee of 20 soles.

As we shook hands, he told me about their Facebook page – Ecoturismo Isla de Los Valles – and that it was their hope more and more tourists would come to visit the lake at Manu’s gate. I assured him that, with time, they would.  After all, if the community’s nature tourism efforts are successful and continue to be well managed, they will be contributing significantly to the health of the Park’s giant otter population. Who would not want to be a part of that?

You can find Jessica’s Words from the Wild at www.jessicagroenendijk.com, or connect with her on Facebook and Twitter @WildWordsAuthor.

This article has been updated from its original publication on July 12, 2017.

Jessica Groenendijk is a Dutch biologist and writer. She lives with her husband and two kids in Pachacamac, and fuses her work in conservation and her personal experiences of wildlife and wild places with her passion for words and photography, to help connect people with nature.

I Went to Machu Picchu During...