The Stone Forest And The Smurf Houses: A Must In Peru 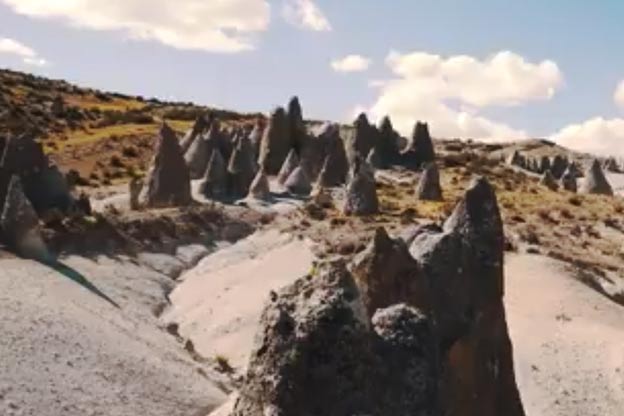 The Stone Forest (Bosque de Piedras) in Pampachiri, also known as Pampa de Pabellones or Páncula, is a natural formation of pointy rocks that reach up to 10 meters high and Daniel Katanella, a videographer, recently recorded them for those interested in learning more about this destination in Peru.

Located in the Apurímac region, 120 kilometers away from the city of Andahuaylas, these rock formations amaze anyone who travels to this destination.

According to Peru Travel, these rocks were formed about 3 million years ago from the volcanic material that was expelled in the area, from the Qarwarasu and Sotaya volcanoes, and it extends up to 60 hectares.

In Daniel’s video, you can also enjoy the “Smurf-type” houses where the people of the Apurímac region live. We’re sure it will bring back memories of the cartoon!

“The rock formations are located at 3,600 meters above sea level”, Daniel told Living In Peru, referring to the Pampachiri Stone Forest. He also mentions that there are some formations that are shaped like a mushroom.

The Women Of The Inca Trail

Peru Is Considered As A “Once-In-A-Lifetime” Destination

Join our Patreon Community to support more content like this, and help us promote all the great things Peru has to offer!
apurímacpampa de pabellonespampachiripáncularockssmurfsstone foresttourismtravelvideovosque de piedras
FacebookTwitterWhatsappEmail

This is Why the Maras Salt...