Tourism In Pisac’s Weekly Produce Market: He Almost Attacked Me After I Took His Photo The Sunday market in Pisac’s main square. People arrive from the mountains above us and the jungle valleys below to sell their produce. Most fruit in the market is sold by mamitas coming from the jungles near Quillabamba. (Photo: Scott Montgomery)

Since it was Sunday, the otherwise sleepy plaza becomes a weekly booming produce market. On these days, indigenous families from the jungles below and the mountains above come to sell produce from their farms. The plaza fills with life. By late morning, busloads of tourists swoop into town as well, most wielding cameras, to have lunch and to get a glimpse of a traditional Andean market. Near where the tourist buses stop to shop, mothers and their children arrive daily to make money posing in pictures. (Photo: Scott Montgomery)

Right away when I moved to Peru back in 2013, I noticed that there were different kinds of tourists who made their way through this small Andean town. There were those who came to stay awhile, for weeks or months, who in general, seemed to be interested in community and customs, landscapes and plants.
In contrast, commercial tourists also make their way through Pisac. They arrive daily in busloads after visiting the nearby ruins that this town is famous for and stay for an hour or two before moving on to the next site further into the Sacred Valley.
When I first moved here, it bothered me to witness interactions between commercial tourist groups and locals in the Andean village of Pisac, which were so often toned by cultural insensitivity on the part of tourists.
On one particular Sunday, I was feeling particularly frustrated by the many tourists who’d live behind their cameras, snapping photos of locals without so much as nodding hello, to simply say I see you. And so, I started taking photos of the other tourists in the same way that they were taking pictures of locals.

Is it not best to move by sense? Before the conditioned processing of our analytical minds can catch up to say something such as: “yes that would be a good idea”, or “no, that guy might decide to attack you.”

Like most, I shoot photos within the pre-conscious moment of inspiration, like a painter who throws a line of paint across a canvas without knowing that line will eventually become the trunk of a tree. In observing their request to not be participants in my project, identities obscured. (Photo: Scott Montgomery)

While thrusting his body forward, close enough to grab me, and smacking his hands against his chest a sound of body meat colliding with body meat, he screamed: “You better not have just done what I thought you did!”
His reaction surprised me, though I had no expectation of how he would react. All I did was shoot his photograph, just like he’d been doing to everybody else in the plaza who wasn’t a tourist.
When the incident happened, I was still in the midst of my first year of living in Peru. It’s now been five years of living here, and lots of things have changed. One of the most important things I’ve learned during the past few years is how to use nonviolent communication in order to open dialog in seemingly difficult situations. If I knew then what I know now, we surely could have avoided this needless conflict.

What follows is part of our dialogue that ensued, which almost escalated into an assault. I really pissed him off by taking his photo.

Tourist: “You’re being political quit this s*** right now if you know what’s best for you.”
Me: “You’ve been taking pictures of this indigenous woman without interacting with her in any sort of way, from across plaza with a zoom lens, while you’re sitting in front of this restaurant drinking a coffee that costs as much as one of these mamitas makes in half a week, without asking permission from her. How is this different from what I did to you by taking your photo?”
Tourist (now standing with intimidation above me): “You’re shooting that for something that you’re going to show people, whatever hidden agenda you have. And I don’t want you using this political shit in your biased journalism. What I do is for me and that’s my business.”
Me: “I shot your photo because you are just like any other creature in this plaza. This is a community, and everything and everyone is a part of this story.”

PHOTO OF THE DAY: ANDEAN FLUTES IN PISAC MARKET 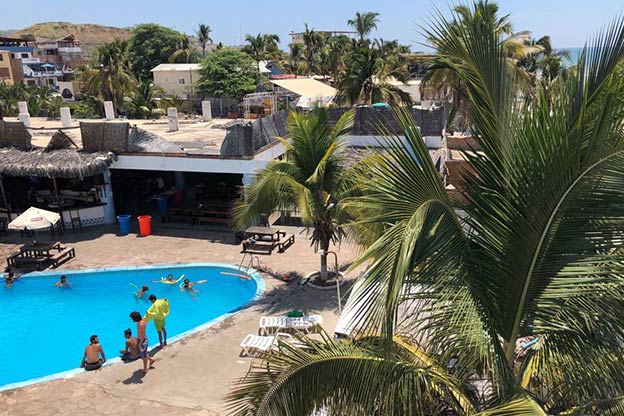 5 Cheap (But Good) Hotels In Peru

Swimming With Sea Lions In Peru: Is It A Danger To The Wildlife?