A Kazakhstanian Adventurer Reflects on Living in Peru 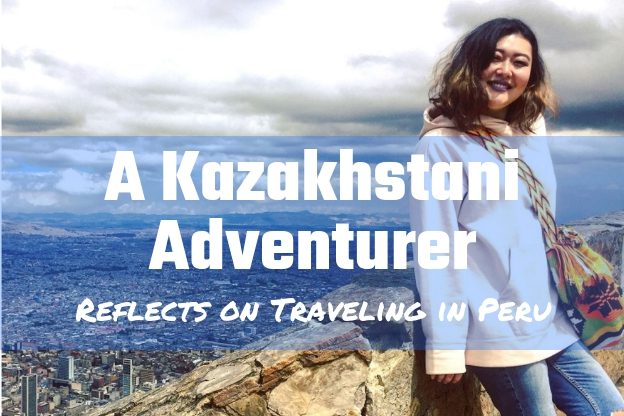 For this Kazakhstan born independent traveler, Peru is packed with endless magic that she hopes to share with others on future travels to other parts of the world. In this interview, she reflects on the cultural differences between Kazakhstan and Peru, and what we can learn from each of these special countries.

Tell us about yourself. Where were you born, where have you spent most of your life, and what did you do before you moved to Peru?

I was born and raised in a small provincial town of Kokshetau. As befits an ordinary schoolchild from distant corners of Kazakhstan, I dreamed about student life in the capital. After graduating successfully, I entered the Kazakh Humanitarian Law University with a degree in International Law. It was not easy to get a government grant for this industry, but I managed it, and this is something that I was incredibly proud of. But youthful excitement took control of my life, and before I knew it, I realized that I was being called to do something different with my life.
While traveling I had to work here and there, naturally, but not by profession. And after working and traveling for awhile, I decided to enter a foreign university to continue my education in the field of jurisprudence. I was admitted to Seoul National University (South Korea) for a Master of Intellectual Property.

When did you move to Peru? What inspired you to come here?

Before finishing my studies in South Korea and defending my master’s thesis, I firmly decided that I needed a kind of challenge, and so I decided to travel, and I knew the first place I wanted to go was Latin America.
As a child, I looked through hundreds of soap operas made in Brazil, Mexico, Venezuela, Peru, Argentina. On the whole, Latin American culture always impressed me. Having decided to fulfill my old dream of learning Spanish, I began searching for jobs in Latin America via the Internet. So at the time of my master’s degree, I already had a one-way ticket to Seoul – Lima.
After earning my degree, I was ready to hit the ground running. On February 23, 2017, I received a diploma in my hands and exactly a week later, on March 2, I was already standing at Lima airport. I took that flight eight months ago, so I’ve lived in Peru for a very short time.

Have you met any more Kazakhstanis in Peru?

Yes, I met one Kazakh here. And it was interesting how we met. Through a brief search on the Internet, I came across an article about a Kazakh girl living in Lima. An external link led me to her social network page. She responded to my message, and we quickly set up a time to meet up on the same day that I reached out to her.
There are also a lot of Russians here. I saw many in the Russian embassy, where I asked for help with the documents. I was also able to meet with two Peruvians who speak Russian. In general, the imprint of the friendly relations of the Soviet government with the peoples of Latin America is noticeable here. Even children are called Russian names.

Arriving in Peru, I finally found myself at ease, so the transition went very smoothly and unnoticed. My Latin American friends often joke and say, there was a mistake in nature, Ainur was supposed to be born in Latin America. I teach English in Lima, I change the lives of 250 children.

What difficulties did you encounter, what was easy?

The only difficulty for me was the language. I ended up among people who speak only Spanish. My knowledge of the language on arrival was scanty, sometimes I had to express myself with gestures. Now, after 8 months of living in Peru, I speak Spanish fluently enough and have no problems communicating. And the rest was easy enough.

How did the locals treat you?

Peruvians are very friendly and hospitable people, and people greeted me like a native. For all the time I have never felt the slightest infringement. In addition, among Peruvians there are many ethnic Japanese and Chinese, so I am often mistaken for a local resident.

What features are striking?

The crime levels are one thing that grab my attention. Many parts of Latin America are dominated by drug trafficking, and Peru is no different. Although Peru is one of the safest countries in Latin America, there are plenty of petty thieves here. The city is divided into municipal districts, some of which are not even worth thinking about stepping foot. In cities and streets during daylight, you can safely walk. But, as the locals say, the alert needs to be always and everywhere.

It seems to me that you can write a separate article about Peruvian cuisine. There is a huge variety of dishes, an abundance of all kinds of fruits, juices, vegetables, seafood. No wonder the world is now highly appreciated local cuisine. I’m like a gourmet. I constantly try to sample new dishes. And restaurants, by the way, are not greedy at all. If you order soup, they will bring you a whole pot, and this is considered a portion for one person.

What are the five biggest differences between Kazakhstan and Peru?

What is the difference between Kazakh men and Peruvians? And Kazakhs from Peruvian?

Peruvian men respect women: they will open the door, and they will give a hand. I here did not observe sexism, which is characteristic of the Kazakh society. As for the girls, Peruvians are not ashamed of their inability to cook. And if we talk about the upper class, the maids do all the homework here. The girls here do not seek to get married before the age of 25, and planning of the child is considered a rather responsible step. As for the Kazakh women, our women look more well-groomed than Peruvian and more anxiously care about their appearance.

What would you like Kazakhstan to take over from Peru? And Peru from Kazakhstan?

It would not hurt to learn positive thinking and a relaxed attitude to life from Peruvians. During my entire time here, I have never witnessed a single fight, scandal or swearing.
In some areas of Lima there is such poverty, which you can not even imagine! But at the same time, it seems like people are always smiling no matter what situation they find themselves in.
Kazakhs like to complain about trifles and talk about their problems, such conversations bring only negative energy. Also, Peru should definitely adopt their education system from Kazakhstan.

Are you going to return to Kazakhstan?

Kazakhstan is my homeland, my home, where I will always have time to return. In the meantime, you need to expand your boundaries, look for new adventures and opportunities.

This article was previously published in Russian here.

Join our Patreon Community to support more content like this, and help us promote all the great things Peru has to offer!
expatexpat in Peruinterviewkazakhstan adventurerkazakhstan travelerkhazakhstanTraveler
FacebookTwitterWhatsappEmail

Staying in Beneath the Covers: Books About Peru

Get Off the Beaten Track to Find the Highest...

How to Spend Thanksgiving in Peru