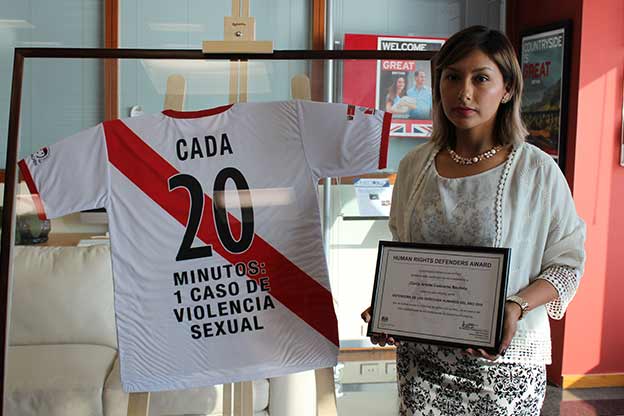 Arlette Contreras received the “Defender of Human Rights 2018” (Human Rights Defenders Award) from the hands of Kate Harrisson, the British Ambassador to the country.
“A human rights defender is someone who defends any fundamental right in her own name or on behalf of a person or a group of people. Advocates seek to promote and protect civil and political rights and to promote, protect and establish economic, social and cultural rights, such as collective rights”, the British Embassy in Lima said in a press release.

Arlette Contreras became the face of the #NiUnaMenos movement against domestic violence in Peru after a video where her boyfriend attacked her boyfriend went viral.

“It’s a real honor for me to meet a woman like Arlette. Her struggle has gone viral not only in Peru, but also throughout Latin America and the rest of the world”, said Harrisson. “Arlette’s case is emblematic of so many other women”, she continued.
On her part, Contreras said that she is grateful for the recognition from the British Embassy.

A report done by the World Health Organization (WHO) said that Peru is one of the countries in the world with the highest incidence of femicides. Only in 2018, 66% of women between 15 and 49 years of age have been victims of some type of violence (psychological, verbal, physical or sexual), according to information from the British Embassy.

More Than 1,000 Femicides Were Registered In The Last Decade

Comfortably Numb: An Opinion On The Prevalence Of Femicide In Peru

An End To Violence Against Women And Girls

Join our Patreon Community to support more content like this, and help us promote all the great things Peru has to offer!
awardbritish embassyfemicidehuman rightshuman rights defender awardviolencewomen
FacebookTwitterWhatsappEmail