The flavors at this well-known restaurant tempted us into overindulgence while we tried plates from a completely new menu.  We quickly lost touch with modesty while enjoying a sinfully delicious meal.

The setting: a place where guilt does not exist.

The temple of temptations (located in La Rambla, Morelli Street in San Borja) welcomed us with an open space, which gave us a sensation of transparency without losing its warmness. Polished concrete, porcelain with a marine color accent with pepelma from floor to ceiling, like a big wave coming through a wall, opened the way to offer an invitation for us to get closer to the bar, which was made out of polished marble, and surrounded by bamboo chairs. Overall,  the space felt natural ecological. While traveling up the staircase to the restaurant’s second floor, we felt like we were traveling on the way commit a sin of overindulgance. “In here, there is no suffering, no guilt either, just pleasure, go ahead” read phrase engraved in the steps of industrial fluted iron in a red vermilion tone. The restaurant boasts a modern architecture, comfortable and warm, which is not very common in this type of establishments. It’s definitely a place to contemplate and enjoy without remorse.

I always value smiles and good attention, and that’s how the chef and his team showed up. Daniel told us he’d been interested in the kitchen since he was young. He made his first inventions in his grandma’s kitchen, who he assures, was a great cook. Despite his early calling to become a chef, he followed a different career path as a young adult. A few years later, he undertook his first internship in the well-known restaurant Marisa Giulfo. He then traveled to Chile in order to keep learning about the culinary arts. After five years away from Peru, he returned in order to use his training to become a professional cook. During his years of apprenticeships, he worked in restaurants, on cruise ships, and at hotels. With that same innovative spirit, he created the menu for Pescados Capitales, in which Peruvian food is the main star. 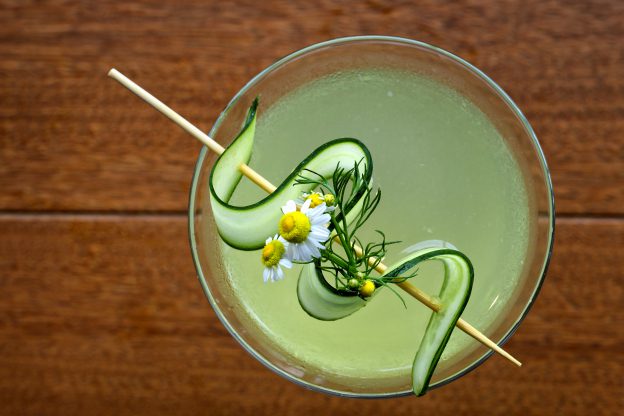 While we sat to enjoy some cocktails before our meal, we took notice of the colorful scene at our table. Our servers brought us canchita (crunchy salted corn) and smoked bacon. In case you prefer citric and fresh drinks, La Pereza (S/ 32) is a good choice. The drink consists of Pisco with apple and pineapple liqueur, triple sec, and an exotic decoration with cucumber and chamomile flowers.
If sour drinks are your passion, La Gula (S/ 35), a rum-based drink with passion fruit, orange, tangerine, and plum syrup will delight you. Aromas of grapefruit and star anise floated from this drink, and its intense smell conquered us. 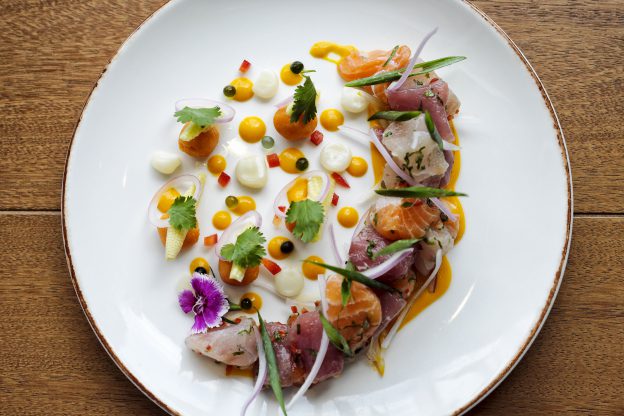 The Cebiche Capital (S/ 62) surprised us in this temptation/sinner experience. It consists of three different types of fish (tuna, salmon, and catch of the day), a whole show of freshness, which our server bathed in “leche de tigre” in front of our eyes. Baby corn, onion rings, compressed sweet potato, spring onion, and yellow pepper gave this plate a burst of color. Also on the plate were transparent green balls which caught my attention. Daniel smiled and explained that they were “Cushuroan,” an algae known as the “Andean miracle.”
The second appetizer Causa de Atún (S/ 49) was pretty peculiar. It consisted of a base of mashed yellow potato, topped with tuna fish sprinkled with quinoa. The dish was accompanied by cubes of avocado, radish, quail eggs, cherry tomatoes, olives, and capers. This mix of flavors made this appetizer an irresistible sin. 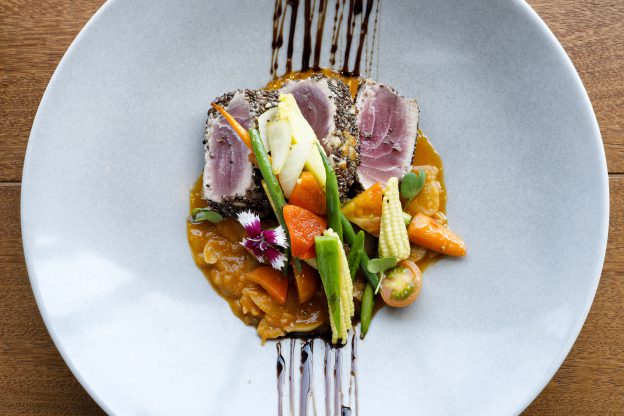 Since the plates arrived nonstop, it seemed as if there wouldn’t be an end to our enjoyment. Our main dish, La Pereza S/ 55 was made from grilled salmon with a warm quinoa-based salad with onions, zucchini, pepper, tangerine, and sweet drops of sweet corn cream. If you like a flavorful mix, this plate might be the one for you.
We also tried an entre called Arrogance Soberbia S/ 55, which consisted of grilled tuna sealed in crusts of linseeds and sunflower seeds, accompanied by glazed lima beans with tomato sauce. Our verdict? It’s a delicacy that you should try. 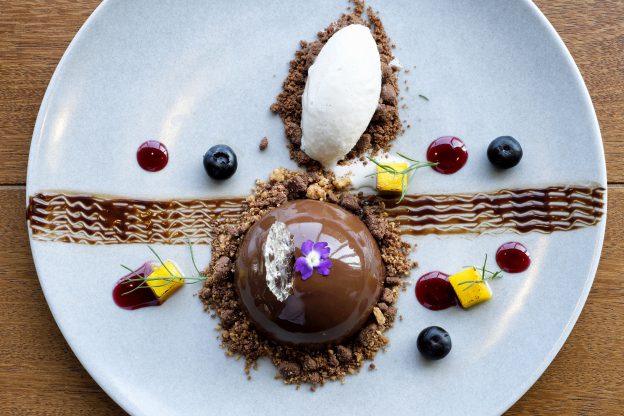 There’s no way go away without topping-off our gluttony with a dessert. But instead of one dessert, our server brought us two: Domo Choco Lucuma (S/ 25) a lustful semi chocolate sphere filled with eggfruit mousse; a suggestive dessert when mixed with vanilla ice cream.
The other dessert was Crème Bruleè (S/ 25). It comes sprinkled with juicy berries, meringue and a light sorbet of aguaymanto (golden berries), and it was delectable.

Pescados Capitales show an authentic concern for the environment. None of our drinks had plastic sorbets, the salt they use comes from Maras, Urubamba community (a 50km of Cusco). “If it is in danger of extinction by season, don’t order it”, is the motto they use to encourage respect for threatened species. This is important so our next generations can enjoy our marine diversity. 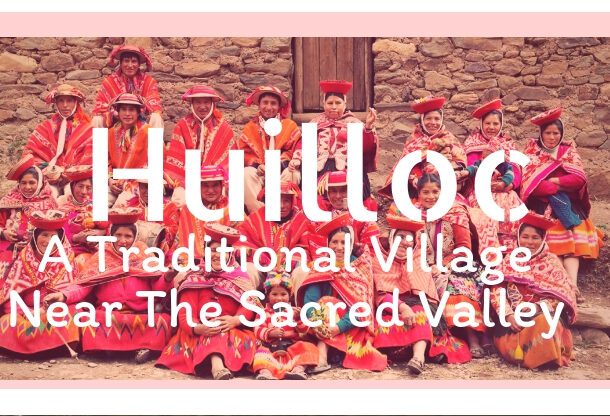 Immerse Yourself in Deepest Peru: Huilloc, a Traditional Andean Community Near the Sacred Valley
Next Article