Top Stories
Travel Updates: Coronavirus (COVID-19) Outbreak in Peru
Peruvian Products with Intense Flavors for Curious Foodies
I Went to Machu Picchu During COVID-19 and...
5 Things to Know About Panetón: A Peruvian...
Visiting Ayacucho? What to Know and Do for...
Zig Zag Restaurant in Arequipa: A Fusion of...
The Complete Travel Guide to Visiting Arequipa: What...
Pezcadores: Delicious seafood off the beaten path in...
Peruvian Recipe: How to Make a Warm and...
7 Attractions in the Amazonas Region of Peru...
Home Peru's Eating Guide 10 Fascinating Things You Might Not Know About Potatoes
Peru's Eating Guide 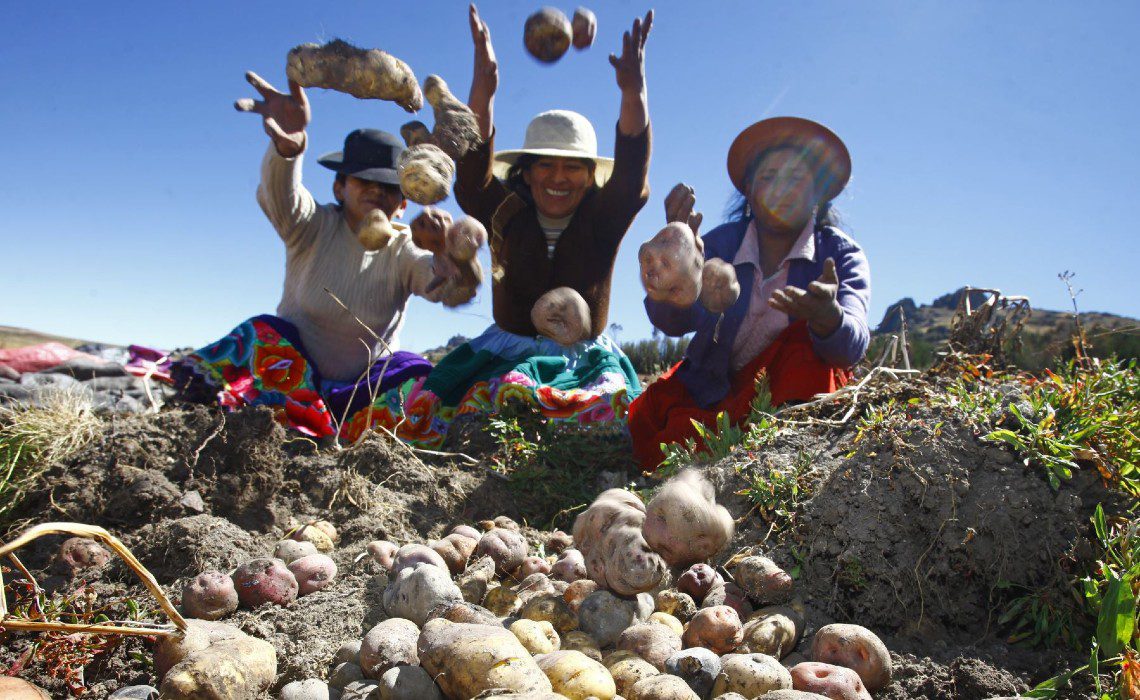 There is much more than meets the eye to this native Andean tuber. Learn more about potatoes and its intimate relationship with indigenous people of the Americas.

1. Potatoes and humans have an 8,000-year history together

People domesticated the first potatoes in the regions of southern Peru and northwestern Bolivia from a wild species in the Solanum brevicaule complex. Since this time, people of the Americas have used their creativity to cross-breed between different varieties of this species in order to cultivate no less than 3,500 different varieties. But pressures of the modern world have taken their toll, and there are presently only several thousand varieties under cultivation.

The potato is Peru’s most important crop, representing 25% of the agricultural GDP. There are more than 600,000 subsistence farms where families cultivate this plant.

3. The potato has changed the world many times

According to conservative estimates, the introduction of the potato was responsible for a quarter of the growth in Old World population and urbanization between 1700 and 1900. According to William H. McNeill: “By feeding rapidly growing populations, [it] permitted a handful of European nations to assert dominion over most of the world between 1750 and 1950.”

4. Have you tried a fifty-year-old potato?

In the Andes, two of the most prized potato varieties, known as chuño and moraya, were engineered by pre-Inca ancestors to still be edible after being stored for fifty years or more. Climate conditions along the coasts and the Andes of Peru have always been unpredictable because of the phenomenon of El Niño and La Niña, which bring extreme conditions of rain and drought. By developing these two types of freeze-dried potatoes that they could preserve for an entire lifetime, ancestors of the Americas found a way to avoid famine.

People of the Andes continue to celebrate these two varieties of potato, and they continue to besome the most sought-after. If you get the chance to try a chuño and moraya, don’t miss out.

5. In the Andes, people use potatoes for divination

One of the most sacred Andean potatoes, known as katchumaktchu, is traditionally used for marriages. When a woman wants to get married to a man, the man’s father will provide a potato for her to peel with a knife. Once peeled, it’s believed that the potato has to preserve its original shape. If not, the community declares the woman not to be ready for marriage. The potato is an essential part of any important ceremony. There are other potatoes that are said to embody the spirits of sacred animals and places.

6. In Peru, the price for the potato is falling, and people are abandoning their fields

With the rise of the modern world, and with the expansion of global trade, people of Peru now give less importance to their native tubers. For this reason, the world is continually losing more native varieties. Many people of Peru no longer choose to eat native varieties of potato, instead choosing the types of potatoes cultivated by large industrial operations that are cheaper. For this reason, farmers of native potato varieties are abandoning their livelihoods in droves, because the market price has plummeted in recent years.

7. Get your hands on a purple potato

If you haven’t yet gotten the word: there are varieties of purple potatoes that you can find all over Peru. In fact, you can find potatoes in all colors of the rainbow. When you get the chance, get your hands on the purple variety: thanks to the flavonoids that they contain they’re loaded with nutrients. There are even studies that show that these types of potatoes have anti-cancer properties.

8. Learn about traditional potato farming at The Potato Park

In the heights above the Sacred Valley, there’s an area of autonomous indigenous land known as the Potato Park. It’s said to be the birthplace of potato domestication. You can visit communities within the park in order to learn about traditional farming techniques, to try a home-cooked meal, and sample local varieties. You can also learn about the customs and ceremonies related to cultivating the potato.

The Inca road system (also known as the Qhapaq Ñan) once fostered the distribution of seeds over long distances. It was by means of this complex road system that otherwise isolated communities traded together. Through trade, ancient Andean people were able to develop more diverse potato varieties. This was essential in order to protect crops from disease. It ensured that when diseases came to infect a certain variety, there would still be others with resistance.

If people of the New World embraced these techniques, it is likely that they could have avoided devastating events such as the great potato famine.

There are communities along the shores of Lake Titicaca where people eat clay with their potatoes. As strange as this might sound, there are good reasons why people do this. Locals attest that the clays they find around the lake are loaded with nutrients. And if we look deeper into the history of potato cultivation, we see that the original varieties of potato had a toxin.

In order to get rid of the toxin, it’s said that native people would bathe their potatoes in clay so that the toxin would stick it. Though people eventually began to cultivate varieties of potato that didn’t have this toxin, it seems that some indigenous communities continue to embrace the tradition of eating potatoes with clay

PERUVIANS HAVE BEEN EATING POTATOES SINCE ANCIENT TIMES

THE POTATO PARK: TRADITIONAL LIFE ABOVE THE SACRED VALLEY

5 Things to Know About Panetón: A Peruvian Christmas...

Zig Zag Restaurant in Arequipa: A Fusion of Alpine...

Pezcadores: Delicious seafood off the beaten path in Arequipa

Peruvian Recipe: How to Make a Warm and Tasty...

Peruvian Products with Intense Flavors for...

I Went to Machu Picchu During...