Home Culture A Dispatch from the Madre de Dios: Staying at the Only Hotel in Illegal Gold Mining Country
CulturePuerto Maldonado

A Dispatch from the Madre de Dios: Staying at the Only Hotel in Illegal Gold Mining Country 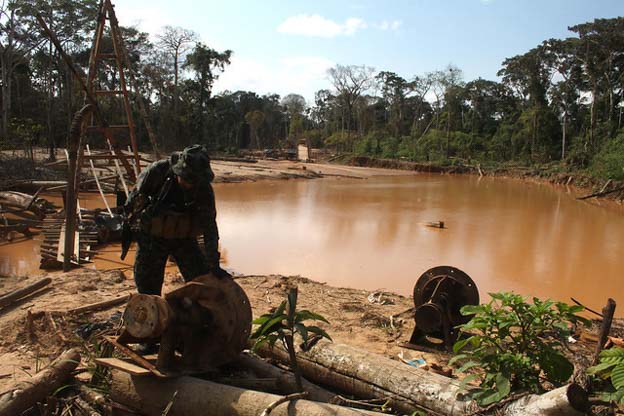 Thirty thousand, perhaps forty thousand gold washers comb the stony rivers of this desert between Peru and Brazil. With each passing day, more men driven by hope and despair will make their way into the valleys and rivers of Madre de Dios. And so here many cherish the belief that in the impassable goldfields they can give their battered life a turn for the better.

The last outpost before the goldfields

Laberinto, a rainy spot on the banks of the Rio Inambari, looks like the dilapidated city of a third-rate western that was forgotten many years ago. The village, 60 kilometers west of the provincial capital of Puerto Maldonado, is the last outpost of civilization before it goes to the goldfields. From Laberinto the law of gold applies

There are no more than two hundred inhabitants in Laberinto. Goldwashers, smugglers, traders, prostitutes, a few dodgy bankers, all on the jackpot in this lottery of natureto hope.

The city, with its lousy dogs and grunting pigs wallowing in mud puddles, does not adhere to anything shiny. Those who come to Laberinto and do not chase after the gold, feel little of the glamor of the precious metal. Rather, he quickly recognizes that desolation and sadness when looking into the faces of men who sleep their drunk in the semi-darkness of pubs smelly of beer and vomit.

The Hotel Lira – with any righteous typewriter having to fail the service if you want to call this building a hotel – is a musty two-story boarding house with no basic civilization overhead for which you would otherwise leave your money in the cheap hotels of this world. The shed without running water and with its lousy mattresses is more meeting place and news exchange of the Mineros as a place to sleep.

Tension at the lira, the local gathering spot

The gold seekers succumb to the harsh austerity of an establishment known as the lira, with its rooms full of dirt, the hard sleeping cots and the filthy communal toilet in the courtyard not only because it is the only accommodation in the place, but because all the gloomy sparseness of the lira appears sheer luxury compared to the lira. The hardship of the jungle trips from which the gold washers come back tired and unwashed.

Even the electric light in the lira, which is generated by a generator, does its job only with good persuasion and on high holidays. During our visit, it is so dark from 7 o’clock in the evening that one has to ask the figures in the corridor who the other person is

On the first night in the lira, two drunks hammer on our door and threaten to enter. We’re supposed to shed our gold, they roar because they think we’re prospectors. Prensa alemana, I roar aloud in bad Spanish through the door, German press. Hoping that German and press sound frightening enough for the drunks. It works, the two drinking buddies let go of reservations.

Join our Patreon Community to support more content like this, and help us promote all the great things Peru has to offer!
dispachgold miningimmersionMadre de Diospuerto maldonado
FacebookTwitterWhatsappEmail

The Story of the Peruvian Flag

Lake Sandoval: A Magical Place in...