No matter what land defenders do, they still lose: if they report illegal activities on their concessions they are threatened by those who are caught; and when they don’t alert anyone out of fear, the authorities sometimes fine them for not reporting the transgressions.

In her kitchen, Ana* was lost in thought as she watched the passage of cars on the Interoceanic Highway toward La Pampa, a territory in Peru’s Madre de Dios region that’s been devastated by illegal mining. Then, she told Mongabay Latam, a voice she didn’t recognize suddenly interrupted the peace of her home. “Good morning, Ana. I’m here to ask you a favor,” a woman said. Ana looked to see the woman standing in the doorway, holding a roll of cash in one hand and wiping the sweat from the intense jungle sun with the other. Ana didn’t dare to ask her name.

“I’ve come looking for you so you could hold onto some machines for me,” the unknown woman said in a tone that made it sound more like an order than a favor. This was days before Operation Mercury 2019, a multi-sector intervention by the Peruvian government that retook control of La Pampa in order to eradicate all illegal activity in the buffer zone of Tambopata National Reserve.

Warned of the arrival of the police and armed forces, those involved in illegal activities reacted by searching for safe places to hide the machines and motors used to extract gold, possibly endangering innocents like Ana while also putting any known land defenders at further risk, since the miners held them responsible for the arrival of the authorities.

“I’ll give you 500 soles [$150] right now and I can give you more later,” the woman insisted. But Ana, who has lived under threat from illegal miners for 12 years, gathered all her courage and told her no. “But why not, if I’m paying you?” the woman reacted, upset. “You’re one of the soplones, aren’t you?” Soplón, as informers are commonly called, is a word Ana has feared since hired killers came to her home two years ago looking to kill her son.

“No, my husband isn’t around and I don’t make these decisions by myself,” Ana replied.

“OK, Ana. I’ll return soon then,” the woman told her in a threatening tone.

Too scared to sleep

That night, once again, neither Ana nor her family could sleep. Nor did they sleep when they learned of the recent intervention in the buffer zone of Tambopata.

While the environmental defenders approve of the government’s new effort, they also know that these operations make them vulnerable. “Because so few of us oppose illegal mining and still live in the buffer zone of the Tambopata reserve, the circumstances put us at risk. They come and threaten us for having called the police,” Víctor Zambrano, president of the reserve’s management committee, told Mongabay Latam.

The approximately 30 environmental leaders who form part of this committee are harassed on a permanent basis by illegal actors, without respite. One of them was murdered three years ago, and the threats continue.

Fear is the word that those who oppose illegal mining in Madre de Dios know best: Fear of the threats from illegal actors after the operation was announced. Fear during the intervention. Fear of what they may live through afterward.

Esteban* learned the effect of those four letters one morning in June 2018. That day, a man on a motorcycle stopped in front of his property and approached his wife to ask for him.

“Who is looking for him?” she said, the door ajar.

“He’s not here,” she replied, and closed the door.

That day Esteban was at home. He wasn’t feeling well and took advantage of the time to rest with his daughters and grandchildren. He saw his wife enter, frightened, as she signaled him with her finger to remain silent. They looked out the window. There wasn’t just one motorcycle, but six.

“Who do you think you are?” shouted the man on the first motorcycle. “You can’t report us and think nothing will happen. In two days, you are going to disappear!”

No one left the house for a week. It was the latest incident to convince them to leave their home for a while.

Demetrio Pacheco understands what Esteban has been through. He found a bullet in the dining room of his home. Serving as the vice president of the Tambopata management committee and president of the Association of Forest Concessions of the Reforestation of Madre Dios has exposed him to many dangers, above all the threats by illegal invaders and loggers. These activities have cornered those who believe in conservation.

The authorities insist that they must report what is happening, but this is easier said than done.

“The authorities demand that we make a report, but they ask for names, which we do not always have,” he explains. Even when they do manage to identify the assailant and file a report, he says, the perpetrator ends up finding out who the soplón was, often because of corruption.

Nevertheless, the environmental defenders with forest concessions have no alternative but to speak up. “In the case of the forest concession holders — which is the legal framework in much of La Pampa — they are obligated to file a report. Otherwise, the Agency for the Supervision of Forest Resources and Wildlife [OSINFOR] fines them for permitting illegal activity in their concessions,” explains Luisa Ríos, coordinator in Madre de Dios for the Peruvian Society of Environmental Law (SPDA). This organization, an ally of the reserve’s management committee, has been following the matter and offering support since 2010 through its free legal consultation program to the farmers, concession holders and reforesters who are being threatened.

The situation described by Ríos has forced many environmental defenders to choose fines over risking their lives and those of their families. For fear of filing a report, Ana was fined in 2014 for having allowed illegal mining to deforest up to 7 hectares (17 acres) in her concession in 2013. To date, she’s been unable to pay the 30,000 soles ($9,000) she owes. Mongabay Latam contacted OSINFOR to inquire about the case and the mechanism for oversight in the area of La Pampa, but by the time of publication the agency’s press office indicated that it could not respond to the request.

The last time Ana requested assistance to remove people illegally on her land, 40 police officers arrived and asked that someone from her family accompany them. They dressed her oldest son as a police officer to serve as a guide and found 14 motors in operation. Each one was destroyed. While leaving, in a moment of carelessness Ana’s son took off the police helmet and one of the miners identified him. What came after was hell. It began when one morning, the nurse from the health post came running to Ana’s home.

“Hide your son, they’re looking for him to kill him!” the nurse told Ana. She had seen two armed men arrive at the post asking after him.

In the shade of a guaba tree, Ana stoically narrates everything she has been through. “Sometimes I don’t want to remember all of this, but I have to tell it,” she says, breaking down as she finishes. “I never would have wanted to know how a mother feels when they’re looking to kill her son. Sometimes I think, how much more can I bear?”

Her son had to leave Madre de Dios for a few years. But when he came back, he came up with a plan to take revenge on the miner who identified him. He asked his cousin to go undercover as an illegal miner in La Pampa to find the evidence to help him report the person. A few weeks after going in, his cousin was interrogated by members of the miners’ security, who then killed him. Today, Ana’s son spends his time farming legumes and, above all, staying under the radar.

‘The government does not ensure our safety’

Garay recognizes that the environmental defenders’ situation is complicated. Without sufficient investigative personnel, they are forced to seek all possible information from the victims, which puts them at risk.

She says that for now, one solution is to bring in the national witness protection agency for the cases of threats against environmental defenders. Only this way can they be given the safeguards to provide reliable information.

Demetrio Pacheco thinks there are forms of protection, but that the authorities don’t know how to apply them. “We are helping the government by protecting the forests, but the government does not ensure our safety,” he adds.

Víctor Zambrano thinks the same. He praises the recent government intervention in La Pampa, which comes in response to years of outcry. But like Demetrio, he maintains that the safety of the inhabitants of the buffer zone of Tambopata must also be considered.

The office of the national ombudsperson constantly receives complaints regarding the environment and threats in Madre de Dios. Guimo Loaiza, a representative of the ombudsperson in this region, says the environmental defenders’ main demand is for the control of illegal invasions, mining and logging, and oversight of the people who carry out land-use changes — all of this even before their own protection.

“For six years they have asked us to demand that the attorney general and police speed up proceedings. They want those who commit environmental crimes to be punished. Dealing with the threats they receive comes second. They say that when they apply for protection orders, they don’t go through because the people threatening them are not easily identified or they don’t have a permanent address,” Loaiza says.

The Ministry of Environment heads the Comprehensive Plan against Illegal Mining in Madre de Dios. For Operation Mercury 2019, it met with various civil society organizations a week before starting the interdictions in La Pampa. The objective was to ensure that all environmental defenders were warned to keep a low profile during the coming weeks.

Leonardo Caparrós, an adviser to the ministry and creator of the above-mentioned plan, told Mongabay Latam that an “early warning network” has been put into place. In the case of any attack against committee members during this time, the members will notify the park rangers, who will inform the police. Nevertheless, the problem is that few people oppose illegal mining, and those who do have already been identified. Their lives would remain in danger if they report the threats to the authorities. “We meet periodically to monitor those living near La Pampa, but it is at the initiative of the committee,” says Pacheco.

“Everyone who opposes illegal mining in Madre de Dios is threatened sooner or later,” sayd Loaiza, the ombudsperson’s representative. Ana knows this very well. Today her forest concession not only has been suspended, but she cannot travel more than 2 kilometers (1.2 miles) without encountering the miners’ armed security. This is the burden she carries for having opposed the mining.

*Because of their vulnerable situations and at their request, Mongabay Latam has chosen to withhold the identities of some the interviewees. In these cases it was decided to use only first names and not last names.

La Pampa, Peru’s Illegal Mining City That Is Wanted Off The Map 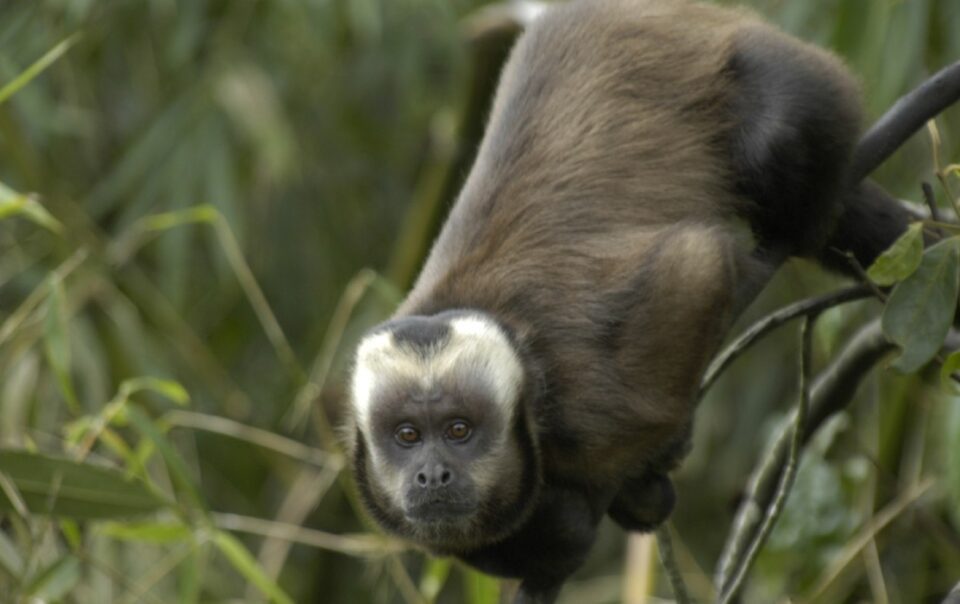 A Dispatch from the Madre de Dios: Staying at the Only Hotel in Illegal Gold Mining Country

June 6, 2019
Korea Airports Corporation Will Lead The Construction Of The Chinchero Airport
Previous Article
Japanese Princess Mako Arrived In Peru For Anniversary Of Japanese Emigration To South America
Next Article