Ten Things to Do in Trujillo 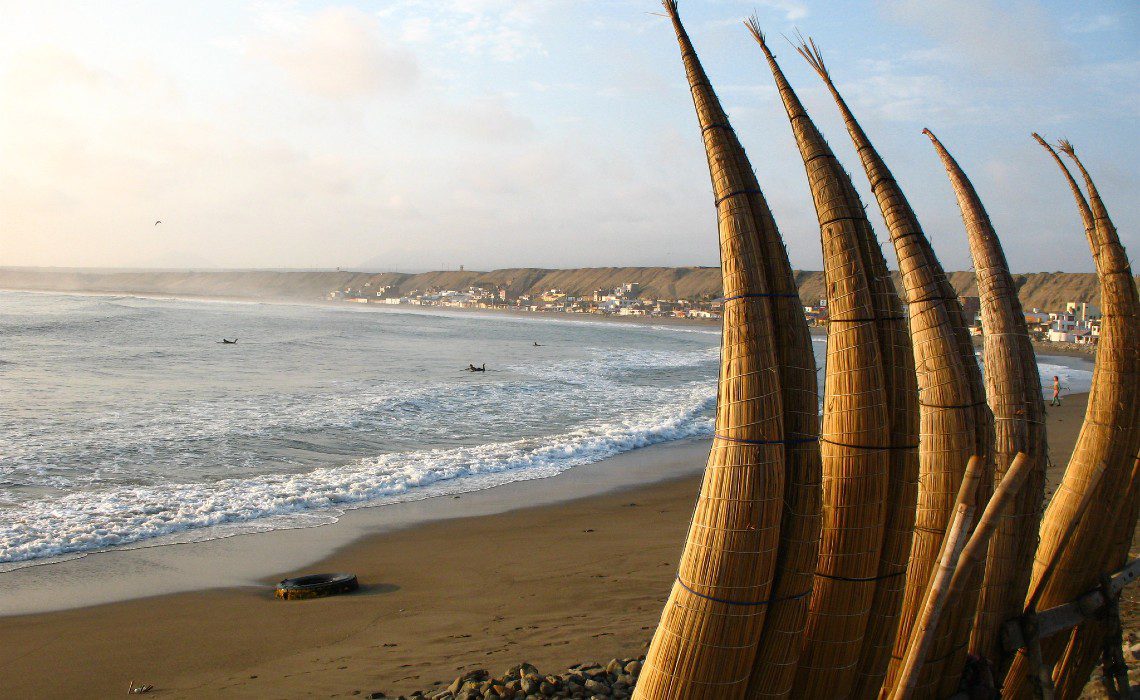 Known as the city of eternal spring, Trujillo will delight you with its historical sites, popular beaches and great food. Here are the ten things you should do while you’re there.

Closed to traffic and lined with fresh cobblestones, the Paseo Peatonal Pizarro is an ideal passage for travelers to explore. This lively strip is lined with banks, grocery stores, restaurants and cafes. Demarco Café (Pizarro 725) features many fine selections of pies and cakes. Stop by for a strong cup of coffee and the Mousse de Guindones.

For a sense of Trujillo’s urban evolution, wander through the complementary “Old Trujillo Photograph Exhibition” at the Galería del Club Central (located on Pizarro Avenue close to Colon Avenue). Finally, there are plenty of benches in Plaza de Armas to relax and people-watch before popping in to Trujillo’s most famous church, the statuesque Basílica Menor.

Peru is famous for its ancient Inca civilization. But there are many other significant archaeological locations, including two sites just minutes from Trujillo’s center. A 15-minute cab ride from downtown will take you to two fascinating pre-Inca historical sites.

The first, Chan Chan, is a UNESCO World Heritage Site and is considered the largest adobe city in the world. The second, Huaca de la Luna, was constructed by the fascinating Moche people, and features a unique narrative of human sacrifice.

There are museums at both locations to help unpack the richness in tradition, religion, art, agriculture and architecture. If you aren’t familiar with the textured saga of either site, guided tours are a must. Guides are free at the Huaca de la Luna; expect to pay around S/ 30 at Chan Chan for a small group.

3. Take a surf lesson in Huanchaco

Because of its ideal ocean-side location, many folks opt to stay in Huanchaco when visiting the Trujillo area. The waves are reliable, the ceviche is cheap and the cervezas flow abundantly. Hostal Naylamp is a cheap, reliable accommodation option. Buses are available from Trujillo center, though taxis can take you for S/ 15.

So, sipping a latte in a French-style Bistro isn’t the most “Trujillo-ian” thing you can do, but you’re a traveler, and as such, will need to unplug at times. After wandering the streets of downtown Trujillo, Museo Café has become a preferred place to wind down, charge up on some caffeine and munch on some tapas. In a city that has delicious food that is all-too-often served on plastic tables, this bistro is an aesthetically pleasing diamond in the rough.

You can have ceviche practically at any restaurant you find yourself in while in Trujillo. Ceviche from northern Peru is considered the best in the country, primarily because it is often prepared with fish caught just moments before it is served to you. Need a recommendation? El Mochica restaurant for good ceviche and other regional dishes.

6. Wander through a local mercado

Markets are always a fantastic way to taste local culture. Trujillo has many markets throughout the city, but while you’re downtown, the Mercado Central is home to a couple hundred colorful vendors. Whether you need something sweet to nibble on, a cheap pair of flip-flops or even your hair trimmed, you’ll find entrepreneurial locals ready to make you a deal. Bartering encouraged. (Located on Ayachucho Avenue between Gamarra and Orbegoso).

Do as the fishermen have done for more than 3,000 years and ride the waves of Trujillo on a reed horse, or caballito de totora. Moche and Chimu cultures used the vessel for fishing and as a sport (it’s debated whether riding the caballitos de totora was an ancient form of surfing). These cultures had the material readily available as the totora plant grew (and still does grow) abundantly in the swamps of Huanchaco, which is now an ecological reserve.

Make your way to the shores of Huanchaco to book a ride on these caballitos.

It’s normal to feel like you are setting forth on an exploit when bouncing in a rickshaw! If you are in one of the Trujillo neighborhoods and needing to go a short distance (i.e. to the market), opt for a three-wheeled mototaxi. It’s cheap and the adventure-factor is obvious. And as with any taxi ride in Peru, it’s important to negotiate the price before setting forth.

Personalize your adventure to Peru

The mountains jutting up around the peripheral of Trujillo provide the best vantage points for vistas of the city, the desert and the ocean. While visiting the Moche ruins of Huaca de la Luna, you might opt to tackle the accessible peak of Cerro Blanco (a two-hour minimum hike).

A second option is Cerro Cabras, which is a rugged hill east of La Esperanza neighborhood. Find a local guide or go in a group of at least four people to optimize safety on this hill (four hours minimum).

Trujillo is the mecca for Marinera, the traditional dance of coastal Peru. The performance is a reenactment of courtship and desire, featuring beautiful costuming and handkerchiefs as props. The annual national Marinera competition takes place in Trujillo every January. But, if you can’t make a visit at that point in time, check out the Club Libertad Marinera for events throughout the year.

This article has been updated from its original publication on March 23, 2011.

The Qhapaq Ñan Trail: Rediscovering the Footsteps of the...