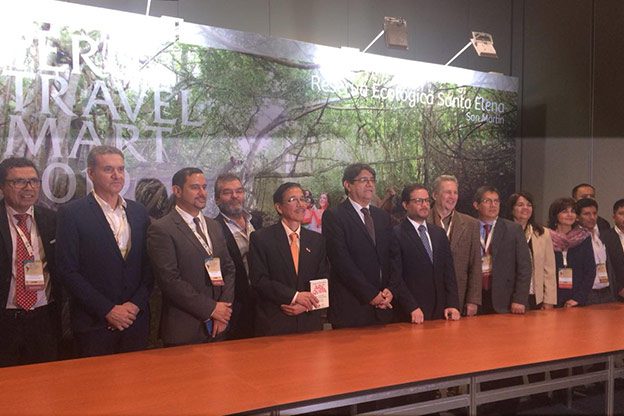 The National Chamber of Tourism (Canatur) and the Association of Travel and Tourism Agencies of Malaysia (Matta) signed a tourism promotion agreement, within the framework of Peru Travel Mart (PTM 2019), which ran from May 18 to 20 in the Jockey Convention Center.

“Carlos Canales, president of Canatur, the Ambassador of Malaysia, Chuah Teong and the minister of Foreign Trade and Tourism, Edgar Vásquez as witness of honor, were in charge of initiating the document that seeks to reinforce the links between the travel and tourism agencies of both countries and promote the promotion of the tourist places of both nations”, a press release informed.

Both Peru and Malaysia have a large tourist offer and, in that sense, the president of Matta, Datuk Tan Kok Liang, expressed his satisfaction at having achieved the signing of a document considering the great multiplier effect of the industry in the economic growth of each country.

Peru Travel Mart 2019 was inaugurated during the weekend by the President of Peru, Martín Vizcarra and it is considered as “the main tourist negotiation exchange of our country organized by Canatur and Promperú, with the support of the Ministry of Foreign Trade and Tourism (Mincetur) and the Commercial Offices of Peru Abroad (OCEX)”, the press release continued.

It was also known that in this event 161 purchasing companies from 21 different countries participated. It equals to 30% more than that registered in 2018, in addition to 130 Peruvian businessmen called to this meeting.

“Of the 163 registered tour operators, 124 are new international participants. Likewise, 61 correspond to the luxury segment, 19 are from MICE (conferences, exhibitions, congresses and events) and 11 are corporate”, the press release said.

The organizers of Peru Travel Mart also estimated that some 7,000 work meetings will be completed as a consequence of this event and more than $25 million US dollars will be generated as an economic impact of the sector.

“Within the framework of the PTM 2019 will be held the business conference, a ‘Speed ​​Networking’, familiarization trips, educational tours and training seminars on community tourism and the North Amazon route, in order to diversify our range of destinations, strengthening the knowledge of them in the international commercial channel”, said the aforementioned press release.

Among other activities that will take place are educational trips with more than 70 international tour operators that will send tourists to Peru to nine different regions. “In addition, cultural destinations such as Caral, Kuélap, Ruta Moche, Cusco, Arequipa and those of nature such as Paracas, Iquitos, Puerto Maldonado, among others, will have special participation”, the press release said.

Join our Patreon Community to support more content like this, and help us promote all the great things Peru has to offer!
malaysiatourismtraveltravel martTravel-tourism
FacebookTwitterWhatsappEmail