How to Make Baked Yuca Fries with Cilantro Chimichurri

These baked yuca fries are the ideal snack or appetizer: slightly salty, crispy on the outside and perfect for dipping.

Yuca is a tuber that can be found anywhere in Latin America, making it one of the most iconic food staples. In recent studies, the phytochemicals, resveratrol and yuccaols, that are found in yuca have been shown to have antioxidant properties, linking them to cardiovascular disease prevention. Usually, you can find yuca prepared either boiled or more often than not, fried. Here, I decided to bake yuca fries using canola oil spray due to its high heat tolerance. I also paired it with my cilantro chimichurri sauce.

Originally, chimichurri comes from Argentina, but making it with cilantro brings a flavor that many Latinos of various origins are familiar with. For the sauce I use canola oil because of its neutral flavor, which allows me to keep the Latin “zest” intact. Canola oil also has the highest amount of omega-3 fats of any cooking oil and is a good source of vitamin E.

1. For chimichurri: Put all the ingredients in the bowl of a food processor and process until smooth and homogeneous.

2. For yuca: Slice the yuca into three equal-length portions. Holding each portion on its axis, carefully slice off the outer peel and discard. Chop each portion in half lengthwise and then into 8 wedges.

3. Put the yuca wedges, water, and salt in a medium saucepan over high heat. Bring to a boil, cover, and reduce to a simmer. Cook for 20 minutes until tender throughout. Drain and let cool.

5. Place the cooled yuca on a large baking sheet and spray with canola oil to coat. Season with salt. Bake for 40 to 50 minutes, flipping once halfway through the baking process, until the fries are golden in color. Serve warm with a side of chimichurri sauce.

All photos courtesy of Manuel Villacorta.

This recipe was originally published in October 2015. 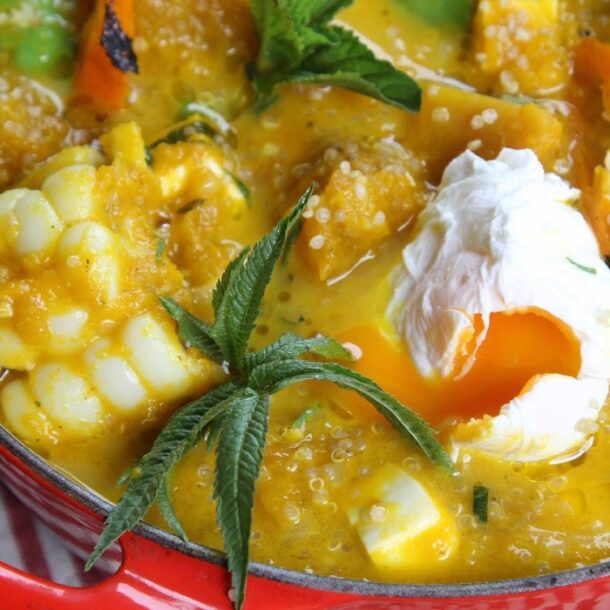 Thayacha de Isaño: A Traditional Ice Cream Made From a Tuber in Puno
Next Article