Barranco Beer Company is a special family-run brewery in, you guessed it, Lima’s Barranco district. Inspired by the beer-loving family patriarch, Don Mauricio, his children and his grandchildren birthed this brewery project together in 2013 after finally finding the perfect location for it to take root.

After three years of searching for the perfect location, they found it in Barranco and officially opened their doors in 2013. As a gesture of appreciation to the district, the owners included Barranco in the name of the business.

Currently, Barranco Beer Company offers six flagship beers, as well as some specials and seasonal options. They have no affiliation with any other beer companies, meaning all of the beer on the menu is theirs and theirs alone. In the past six years, they have expanded to the point where their beer is stocked in Cusco and at some commercial locales.

The feeling you have when you enter the establishment is similar to that of a pub, from the decor to the colors and the art on the walls. The environment gives you a feeling of fun, with a good view at the end of the room of a few metal beer barrels. This year, they have introduced an activities calendar full of different events and specials. From Monday to Friday, BBC offers a 14 soles menu (the “Menu Popular”), which includes an entree, a main dish, and a juice. Alternatively, they have their “Menu Cervecero,” which includes a glass of beer, instead of the juice, for 18 soles.

The Food and The Beer 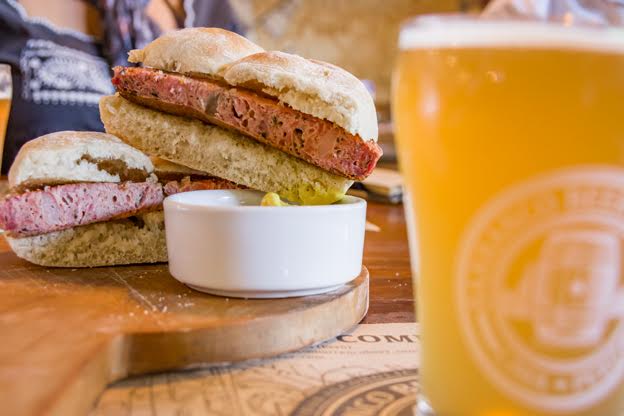 We started lunch off with their Choripan Cervecero (11 soles) and a tasting glass of Fifti Lager, one of their flagship beers. The pair goes well together. The beer is made with barley, malt, yeast, and water. The flavors are refreshing and light. The bread is made in-house using the same beer. The strong flavors of oregano and pepper from the chorizo mixed with a good spoonful of mustard made it a very good starter.

The next dish was a very generous Club Sandwich (25 soles). It’s big. You could definitely share it if you are not a big eater. Served on homemade focaccia bread with a side of crispy chips, the sandwich is composed of grilled chicken breast, lettuce, tomato, fried egg, and bacon. This sandwich was paired with the Pale X, a beer deep gold in color, with 10% rye and aromatic hops. 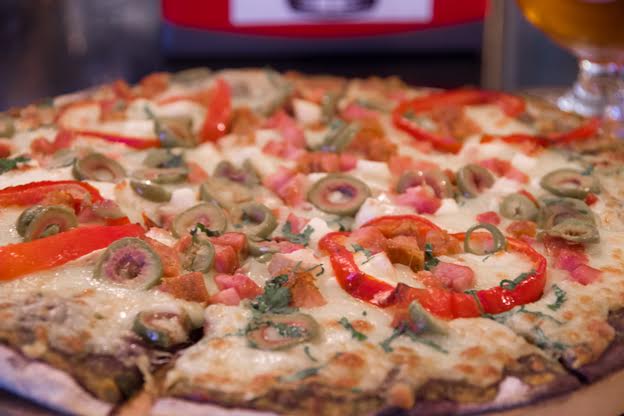 We followed this up with their very unique Pizza Morada (32 soles). The crust of the pizza is made from purple corn, which is a corn indigenous only to Peru. The sauce is made from Amazonian tomatoes. The cheese is a smoked Serrano and the toppings include cured pork, smoked sausage, green olives, hot peppers, and Amazonian cilantro. It was a delicious pizza and a first for me; I had never had such a thin, crisp crust. The flavor of the cured pork and the smoked Serrano worked well. We accompanied the pizza with a glass of AmarguIpa, a golden, medium-bodied beer, with a tropical aroma. 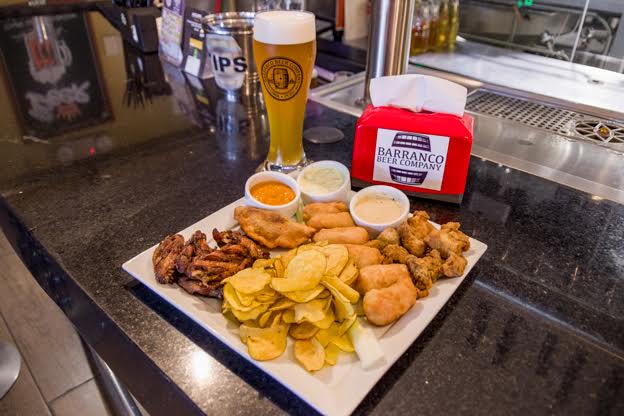 We ended lunch on a big note with one of the their sharing plates, La Ronda de la Compañia ( 45 soles). What you get on this plate are six ham and cheese croquettes, chicken wings with a house marinade made with their Pale X, chicharron de pollo (a deep-fried, Peruvian-style chicken dish), some pastries filled with beef, three dipping sauces, and some crispy chips. The plate is generous and will be the perfect dish if you are with a group. We washed down this amazing ronda with a glass of Jefe Weiss, a classic Hefeweizen with a fruity aroma made with wheat.

Unfortunately, if you are a dessert lover like me, BBC does not offer any desserts, so our meal ended here.

The ABV is the percentage of alcohol in the beer and the IBU is the bitterness.

The 5 Seasonal and Special Occasion Beers:

You can order a tasting board of four beers for 25 soles or six beers for 40 soles. If you’re just ordering a glass, you have four different options, including a tasting glass of 6 oz for 7 soles, a 10 oz glass for 10 soles, the 22 oz chop for 17 soles, and a 57 oz pitcher of beer for 45 soles.

And, if you are not a beer drinker, BBC also offers wine, whiskey, and pisco, ranging from 10 soles up to 220 soles for a bottle of Johnny Walker Black Label, as well as coffee and non-alcoholic drinks for anywhere from 6.50 to 9 soles.

With the World Cup just around the corner, BBC will change its opening hours to broadcast the matches. So, if you are a futbol (soccer) lover and are wondering where to watch your team play, this is an option to keep in mind. Check their Facebook page for updates on times and matches.

Join our Patreon Community to support more content like this, and help us promote all the great things Peru has to offer!
Barrancobarranco beer companybeerLimaPeru
FacebookTwitterWhatsappEmail