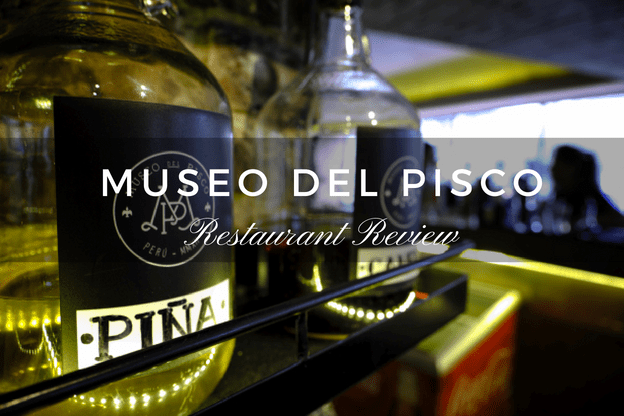 Every restaurant visit we make is in one way or another a learning experience.

The afternoon we visited the Museo del Pisco was most definitely one of those days. Museo del Pisco recently opened a new location in May of this year here in Miraflores, across the street from Parque Kennedy. They are on the second floor and have spectacular views of the park and the surrounding area. Besides this new Miraflores location, there are Museo del Pisco locations located in the downtown Lima area, Cusco, and Arequipa. A new location will eventually be opening in Santiago, Chile.

Few words are so intimately linked to Peruvian identity and history as is ‘Pisco’, a Quechua term meaning ‘little bird’. Pisco is Peru’s flagship spirit. Pisco or grape brandy is a miracle born from the fertile Peruvian desert and the mixture of Indians and Spaniards. More than four centuries ago, peculiar soil, climate, culture, and history bred a grape variety that adapted to a land at once millennial and promising and gave rise to a new spirit of world renown. Pisco is very versatile and can be used for cocktail mixing and for sipping. 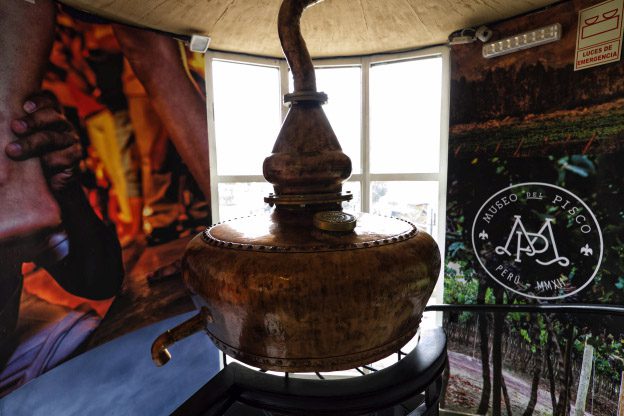 There are three varieties of pisco: Pisco Puro, Pisco Mosto Verde, and Pisco Acholado. Pisco Puro refers to the pure pisco followed by the name of the specific grape used. Pisco Mosto Verde refers to the pisco that comes from one grape variety with an interrupted fermentation process. This is a type of pisco that is preferred for sipping by many pisco lovers. Pisco Acholado uses a mix of several grapes. 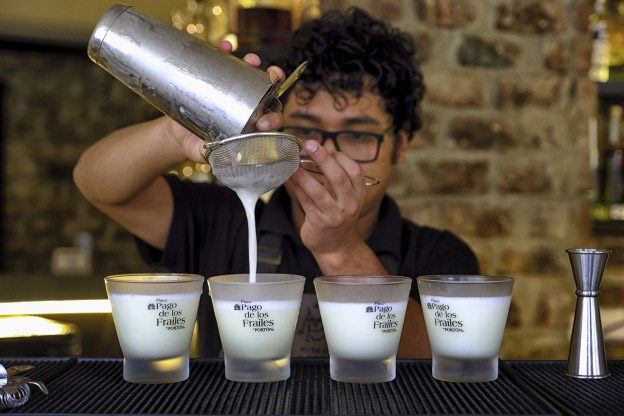 Now on to the artisanal-style piscos we sampled the day of our visit. First up was the Alto Los Trinos, a pisco puro made with the Mollar grape and was more aromatic. This pisco is from the Mala area and contained 42% alcohol. One of our favorites! The Torre de La Gala pisco hails from Arequipa and is made from the Moscatel grape. This pisco had a more aromatic and floral flavor. Paca Paca is a pisco from Ica. It had a blend of four grapes and uses three aromatic grapes. This pisco we found to be smoother and sweeter. This was one of my favorites. The Etelina brand is from Ica and is a mostaverde quebranta.

From there we moved on to sampling four “pisco puros”. The first three mentioned below have varying degrees of a slight green olive flavor due to the earth where the Pisco is made. The Pisco Mirez was my favorite of these three. This pisco is from Pacaran and has a resting period (“reposado”) for three years and has an alcohol content of 43%. This pisco won the Medallo de Oro (the gold medal). The Pisco Angel Negro hails from the Zuniga-Cañete region and contains 43% alcohol. The Tierra Nueva is from the Lunahuana area and has 42% alcohol content. Pisco Don Amadeo was one of our favorites of the “puro piscos”. This pure pisco comes from Cañete and uses the Italia uva and rests for 30 months. It contains 48% alcohol. This Pisco was full of aroma and was wonderfully smooth…..an excellent pisco to slowly sip.

We learned so much as well from the bartender, Anthony Aedo Cáceres. We were told that pisco sours are best when using a quebranta pisco (Museo del Pisco uses 3 ounces). Chilcanos are best prepared using torontel Pisco (2.5 ounces of Pisco used here to prepare the Chilcano). Museo del Pisco uses the brand, Pago de Los Frailes Pisco when preparing most of their house pisco sours and chilcanos. We were delighted to sample a few of their new Pisco specialty cocktails that Anthony created (not on their menu yet, but you can request them). To watch Anthony in action preparing these cocktails was a privilege. It’s obvious he takes great pride in his work. All of his cocktail presentations were exquisite and fun to watch him prepare.

The first new pisco cocktail was named Pacha, which is a Quechua word that translates to “tierra” (earth). This cocktail contains sliced raw beets, Cynar, Aperol, Campari, and Pisco Angel Negro. The cocktail was accented with dried beet potato chips. 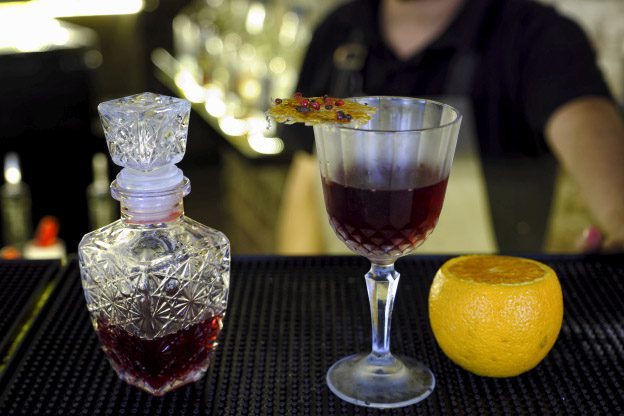 Mi Sangre was one of our favorites! This heavenly concoction was a mixture of pisco macerated with Flor de Jamaica (hibiscus flower), Campari, Cynar, and Cinzano Bianco. Anthony also cut a thin slice off of the top of an orange covered the top of the orange with brown sugar and then topped off with pink peppercorns. From there he used a mini torch to caramelize the sugar and then gently removed this gorgeous orange-infused sugar slice which was then used to decorate the drink. You take a small bite of the sugar disk with peppercorns and then take a sip of the cocktail. What an amazing cocktail experience! 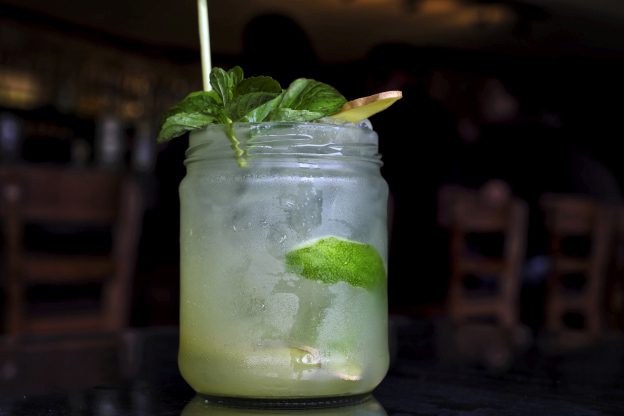 One of the table favorites was the Cholo Mule, a wonderful cocktail of Mr. Perkin’s Ginger Beer, ginger Pisco (macerated with ginger), and the skin of the lime which has a wonderful oil in it. All of it was served in a glass mason jar and decorated with mint, fresh ginger and instead of using a plastic straw they used the hierba luisa (lemongrass) as a natural straw.

Doña Lucha (S/. 25) is one of the most popular cocktails on the menu at Museo del Pisco. This was a refreshing mixture of pisco macerated with hierba luisa (lemongrass), passion fruit juice, simple syrup, and accented with apple slices and a lemongrass straw.

Museo del Pisco offers pisco sour making classes, as well as pisco tasting flights, pisco and chocolate pairings and cocktail classes with pisco. The day of our visit a group of four Canadians from Montreal took turns behind the bar preparing pisco sours with the assistance of bartender, Anthony. The team of Living in Peru were invited to also prepare pisco sours. The cost of the brief pisco sour class is 30 soles and includes your preparation of desired pisco sour and then you have the opportunity to enjoy your pisco sour.

Now on to the food……the food served at Museo del Pisco was surprisingly quite good for the most part. The prices are comfortable and moderate as well. We began with three different tapas…….the Chicharron de Pescado y Palta, the Muchame de Prosciutto de Pato, and the Butifarra de La Bodega. All tapa selections come with 4 pieces of the option you choose for 19 soles. All of these tapas were served on top of baguette bread slices. Our favorites were the fish which was fried in a light panko crust and slices of avocado. The sliced duck prosciutto was marinated in olive oil and herb-cured and was of excellent quality. The Butifarra used excellent quality slices of pork topped off with sliced onions and peppers (salsa criollo). Museo del Pisco offers a selection of 4 platters o our choice (total of 16 tapas) for 70 soles as well. 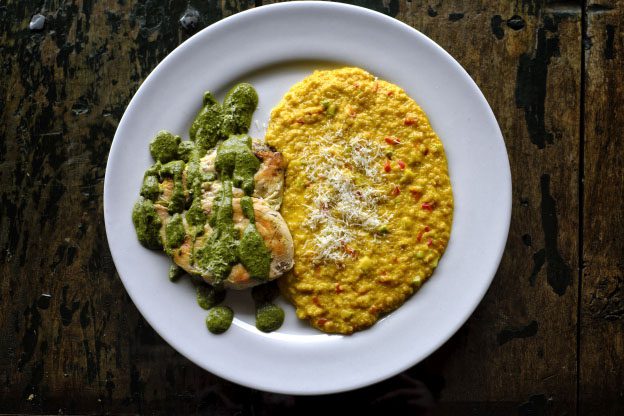 The Pollo al Pesto con Risotto Cremoso de Quinua (S/. 32) was quite delicious. The chicken fillet was grilled and bathed in a pesto sauce. The best part of this dish, for me, was the quinoa risotto which was infused with an ultra-creamy huancaina sauce. I’m a huge fan of quinoa and I could eat this every day!

The Fettucine a la Huancaina con Lomo Saltado (S/. 38) was a “hit” with the lomo saltado since it was cooked to perfection, the sautéed beef was tender and juicy, as were the sliced onions, tomatoes and aji amarillo were crunchy. All of this was sautéed with a touch of pisco and dark beer. The fettuccine portion of this dish was a “miss” because the fettuccine was overcooked and soggy, although the huancaina sauce was quite delicious.

We also sampled two types of tequeños…Tequeños de Lomo Saltado and Tequeños de Ají de Gallina (S/. 26) as well as their Ensalada Inka Caesar (S/. 18) which were both decent and ideal for sharing.

Thank you to Cesar Mires Torres, the operations manager as well as Ruth and Anthony. Overall, our experience at Museo del Pisco was wonderful. Please note, there is dancing on Saturday evenings at this location and there are many piscos available for purchase at the Museo del Pisco, most of which are showcased in lit displays on the premises.

Join our Patreon Community to support more content like this, and help us promote all the great things Peru has to offer!
gastronomyLimaMirafloresMuseo del PiscoPeruPisco
FacebookTwitterWhatsappEmail

Learn About the Prickly Pear Cactus Grown in Moquegua,...